A comparison of the book and the film, following a recent read of the novel for the first time. 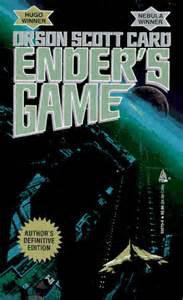 WARNING: SPOILERS! Read on at your own risk!

Okay, so I will admit that I was one of the great unwashed. I didn’t pick up, and read, Ender’s Game until a month or so before the movie came out. Of course, I had a copy—it was a classic, right?—but I hadn’t actually read it.

Then I did, finally. And it was good. The development of Ender, the progression from game to game with higher and higher stakes, was well-presented and logical.

Of course, being a political junkie, I also enjoyed the subplot with Val and Peter and their web alter-egos—and wasn’t Card prescient in his imagining of the internet and the anonymity it would bring?

I admit, too, that when it was revealed that the final games were actual battles I was quite surprised. Okay, okay, I hadn’t seen it coming, I get it. I probably should have, yeah, but I didn’t. That speaks to the skill with which Card drew me into his universe.

Moving on, I had the opportunity to go see the movie the other night, at one of the eight o’clock showings. First time I had ever gone to an ‘opening’—I usually avoid them like the plague—but this one called to me.

I’m not going to critique the movie, minute by minute; there are many more qualified than I who will be jumping in to do that. Instead, I’m going to just make a few observations.

First, there were only a dozen or so of us in the theatre. Disappointing, to say the least, but given that it was cold, raining, and Halloween night, not entirely surprising. 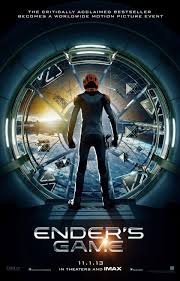 Second, while the bulk of the book takes place over about a six year period (yes, yes, I know, the book continues for many decades after the climactic battle scenes, but most of the meat of the book is Ender’s training on Earth, in Battle School and then in Command School), the movie gives the impression that it was about a six-month period. Yes, I get it, it would be difficult, even in this CGI era, to start with a six-year-old and progress through to a near-teenager. But by compressing the action to the shorter period much of the depth of the book is lost. Enough is conveyed that my partner stated that she was ‘totally carried along with the movie,’ but, by comparison, the movie lacked a bit.

Third, the punch of the plot was actually stronger in the movie. Being able to see and hear, instead of reading and imagining, adds so much to the power of the story. A potent message the movie conveys is summed up neatly by Ender after wiping out the enemy: How you make war is as important as why you make war.

(No, I’m NOT going to go into this. If it resonates with you, then you understand and don’t need me to elaborate; if it doesn’t resonate, then nothing I say will make a difference. No flame wars here!)

I did appreciate in both the book and the movie the homage to Heinlein’s classic Stranger In A Strange Land, that to understand your enemy means you have to know them and in knowing them you will come to love them as they love themselves—and it is only in that moment that you can defeat them.

A wholly worthwhile movie. Thoughtful, but with enough action and motion through the plot to satisfy most.

If you’ve nothng better to do, why not check out all of the films referenced by The Rocky Horror Picture Show’s title song – Science Fiction Duodeca Feature? There all here, and all online for a free viewing.

SpaceX Reveals More Details About Its Future City on Mars

How Valve Hopes to Change the Videogame Console Market