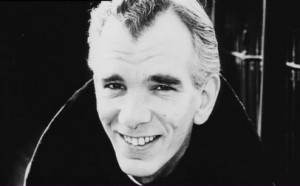 If a camel is a horse created by committee, what does that make Doctor Who? A miracle. Every so often in life, a moment of serendipity occurs when everyone involved in a project creates something marvellous. The birth of Doctor Who, fifty years ago this week, is one of those moments. The opening titles, the theme music, the style and scope of the show, the lead actor, the invention of the TARDIS, and the ultimate appearance of the Daleks are all the result of brainwaves from lots of different people on a young, ambitious team. Though developed over two years by a committee of producers, writers, directors and story editors, one person was vital to the initial success and ultimate longevity of Doctor Who, although he has been overlooked in the history of the show. That man was the first story editor, David Whitaker (1928-1980). Without key decisions made by him, Doctor Who could easily have disappeared from our screens and been nothing more than a fading memory, like Doomwatch or Space: 1999.

When Whitaker was appointed as story editor in 1963, some of the early scripts were already in production. At that time, the series had an educational bent. The stories would alternate between historical and science-fiction adventures. The true originator of the series, Canadian head of serials Sydney Newman, was especially keen to avoid “bug-eyed monsters.”

While looking for writers, Whitaker got in contact with freelance script writer Terry Nation, who shared the same agent. Nation didn’t want to do the show at first, but finally took Whitaker’s offer after a falling-out with his then employer, the comedian Tony Hancock.

Nation’s scripts featured the Daleks, mutant survivors of a nuclear war encased in protective machines. This was very much entering “bug-eyed monsters” territory. When Newman saw the the final show, he was furious that his instructions had been ignored.

At the point when “The Daleks” was produced, it was touch-and-go as to whether Doctor Who would survive at all. Aghast at the cost of the TARDIS set, managers at the BBC had already proposed replacing it with a cheaper serial. Only a total of 13 episodes had been commissioned, and so had “The Daleks” not been a success, Doctor Who might have ended then and there, a damp festering blob of yellow alien matter on the floor.

Instead, Daleks became a cultural phenomenon. Whitaker had commissioned the right man to save Doctor Who and in doing so, he changed the whole direction of the series. No more would the focus be on worthy educational scripts. People wanted bug-eyed monsters, and that’s what they were going to get.

Except that it wasn’t quite so easy. At the end of “The Daleks,” the production team had two episodes left to record, but they had no scripts and no money. No money, that is, for an author, additional sets, or guest stars. They only had the TARDIS set and the four regulars (the Doctor and his companions). Whitaker would have to create fifty minutes of drama (two full episodes) out of nothing.

Once again, he rolled up his sleeves and produced not a masterpiece, but a pair of scripts that filled a vital gap in the programming. The story that resulted, “The Eve of Destruction,” is a dark, claustrophobic affair, albeit one that’s a bit slow for modern audiences. Whitaker took the opportunity to develop the characters of the four leads, and in doing so, gave William Hartnell one of his best speeches as the Doctor.

In “The Eve of Destruction,” Whitaker also examined the nature of the TARDIS. He was the first to suggest that the Doctor’s ship is alive in some way, a theme that has come back time and again over the years.

Having given Doctor Who a major push in the right direction, Whitaker then became a freelance author, writing both science-fiction and historical scripts. One of these stories, The Crusades, is an extraordinary achievement for the time. In The Crusades, both the Franks and the Saracens are fully developed people, with aims and objectives of their own. There are no cartoon villains here, no treating of the Saracens as ‘the other’, and certainly no supposition of the Europeans having right on their side. Only two episodes exist, but they still make for compelling viewing. 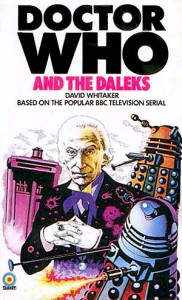 Still working as a freelancer, Whitaker then became the author of two of the first novelizations to come from the series. His novels, Doctor Who in an exciting adventure with the Daleks and Doctor Who and the Crusaders, appeared alongside Bill Strutton’s Doctor Who and the Zarbi. It was these books that editor Richard Henwood came across by chance in a visit to a publisher’s office. Henwood decided to publish a whole range of Doctor Who stories, which became the Target novelizations. These sold in the millions and they are currently being reissued.

If there’s one thing that the BBC management understand very clearly, it is the power of money. Despite all of its problems and having faced cancellation numerous times, Doctor Who has survived because it is profitable. In the 1960s, Dalekmania provoked a frenzy of marketing that served as a precursor to the action-figure boom of Star Wars in the 1970s. Later, the novelizations constantly brought in money and Whitaker remained a part of that process. He was working on an adaptation of his script “The Enemy of the World” when he died at the tragically young age of 51 in 1980.

Doctor Who would not be the hit it is today without the work and foresight of David Whitaker. Despite that, his role has not received the attention that it deserves, perhaps because he is not here to give us his side of the story. As we reach the 50th anniversary of the show, it is time to give due credit to a key player in the development of the world’s longest-running science-fiction series. Without David Whitaker, Doctor Who would not be on our screens today.