While reading the newspaper today I was struck by how polarized politics have become in the U.S., on one hand headlines announce that the “Tea Party Takes It on the Chin” and on the other that the “Pot Tax Wins.” So, I’m really confused. Does that mean the Tea Party is smoking that wacky weed, or the GOP establishment? Either way it goes a long way in explaining all the delays in passing legislation in the Capitol. Like how can they get anything done in government when having an attack of the munchies and waiting for all those pizzas to arrive?

Oh well (coupled with a big sigh) that’s how things are nowadays. All my life I’ve hoped things might change for the better, but I learned to “hurry up and wait” back during my tour in the Air Force over a quarter of a century ago. (And I’m still waiting for our government to get its collective act together!) It does seem that clichés govern us these days more than people do.

Okay, class…ready for today’s lesson? Put on your Propeller Beanies (and give them a good spin) and put down your Zap-Zap Ray Guns! The Word for today is byzantine. My online dictionary defines this word as “relating to, or characterized by intrigue, scheming or deviousness.” Now doesn’t that define our government in…well…a word?

It also defines the world of printed fanzines as practiced today in fandom.

In the beginning (Gosh, doesn’t that sound great!) after World War II when the wunderkind and adults back from the war got together to found and forge a new fandom from the ashes of the childlike pre-war false start the printed fanzine was all the rage. It was the thing to do, and everyone was doing it. Some better than others, some longer, but it was how fans met each other and built up fandom by discussing such things as whether to hold a convention, and where, and by which group. All sorts of fun things happened inside the pages of the printed zine.

And getting copies of printed zines was easy back then, but not so these days. I was just astounded when Amazing Stories editor Steve Davidson asked me for my address in order to forward me a printed fanzine by snail mail. I was struck by how rare and unusual this event is now. What was common in my Pop’s generation is now a subject for comment and inspection as though finding an uncut diamond. It’s that rare an event.

Back in the late ‘40s and early ‘50s, fanzines were freely traded. The usual coin of the day was to send one and get one back. The Brits even traded their zines for used copies of unavailable promags like Amazing. You could even ask for a free copy of any fanzine in order to sample it before deciding to subscribe. Yes, subscribe! It seems that those early printed fanzines were sold, usually for 5¢ or 10¢ each, or three issues for 25¢. The subscriptions paid for the cost of the paper, and their manufacture, whether by hekto, ditto or mimeo (although a choice few were actually printed by a real press).

Rog Phillips in his original column for Amazing Stories, The Club House, made a note of always suggesting that those asking for a free zine send along a stamp and envelope to help defray the costs.

There were dozens of fanzines to choose from back then, some monthly, some even weekly, and you didn’t have to belong to a special club like SAPS or FAPA in order to receive them.

But things have changed. The printed fanzine has nearly faded from the world of fandom. It really is a rare bird. And it’s not merely due to economics. It was relatively as expensive to produce and mail a fanzine back then as it is now. So it’s not all about the Benjamins.

So, now to tie all these various pieces together with the Word of the Day. Even though it is nearly impossible to find a printed fanzine, let alone receive one, they do exist. Recently I sent off over forty of my own printed zines to various members of CorFlu. Now CorFlu is a loosely knit association of individuals tied together by their fanzine production. They hold an annual convention in order to get together, just like fandom at large does. I thought that I might hit pay dirt, and receive a copy of some of their zines, like maybe even a copy of Banana Wings, as edited by Claire Brialey and Mark Plummer.

I’d met both Claire and Mark at a CorFlu convention. I liked them both. They are both witty and charming. Why they even gave me a copy of Banana Wings (although it seemed with some reluctance, as though they weren’t quite certain about giving me one). Banana Wings has won the Nova Award for Best Fanzine five times. It has also won the FAAn Award for Best Fanzine twice, in 2007 and 2010.

Now here is where things get byzantine. They never responded to my request for a copy of their fanzine. I know it is even available electronically, as there are some rare, few individuals who receive it that way as well. (Jim Mowatt told us so in his recent ezine Pips!) But not me, I guess I just don’t make the cut. And that’s okay. But this is where it all gets byzantine. How can a printed fanzine win so many awards when it is not available to the general public to read?

I vote for the FAAn Award. I receive a ballot. Yet increasingly find fanzines listed that are entirely unavailable, not just Banana Wings, but others as well. This underscores the true value of these types of awards; they have no real value at all. They are awards given by a very small group (the select readership … apparently not me) to an even smaller group (the very exclusive editors), not by the public at large. Yet, with smoke and mirrors, the awards appear bigger, and the fanzines appear better than they truly are.

I’m all for transparency, whether in government or in the affairs of fandom. Exclusive awards given with the fake appearance of some inherent value only deceive the recipient, not the excluded public. All this leads back to my fundamental point about fandom…it is for all of us. I’m against excluding anyone for any reason. I don’t think fandom is about exclusive sub-groups parasitically getting their momentum from an obscure and byzantine connection with fandom at large.

Exclusive fandom, like exclusive fanzines, divide fandom, and cause fractures and ruptures in the basic fabric of connections that is the very heart of fandom. Excluding individuals from a sub-group, for whatever reason, is okay, as long as it is understood that these sub-groups are destructive, and not at all concerned in any way with building up fandom.

Not that I’ve written the epitaph for the printed fanzine, let me be perfectly clear. There are still printed fanzines out there. (Good luck finding them!) They pop up now and then, and usually disappear because they are expensive to produce and mail when there is a brand new alternative available, the ezine, with which to compare those costs. The day of the printed fanzine is fast fading, now kept only by sub-groups and in-groups for a select few who praise their invisible work in the darkness of their exclusivity.

So, let’s get on with the task at hand, and boost fandom. A new fandom! One for all of us, old and new, young and old alike, and let’s put the exclusive sub-groups in their proper place, as a mere footnote in the decline of a once favored tradition now adhered to by practitioners who mostly seek egoboo even if they have to manufacture the awards themselves.

Still interested in fanzines, as you should be, then get busy with producing your very own ezine. It’s not hard to do. Pull all of your friends into it, and start your own science fiction and fantasy club. Hold meetings and decide what to do and what to put in your club fanzine. And then post it online. Email it to new friends and get in contact with the world at large. There are fans all around the world. You might be surprised when your ezine gets feedback from Argentina or from Japan. Embrace the larger world and help build a new fandom for all of us together.

Wow! And don’t forget to have fun.

This was a slim week in ezines posted at eFanzines.com, to being with we have: 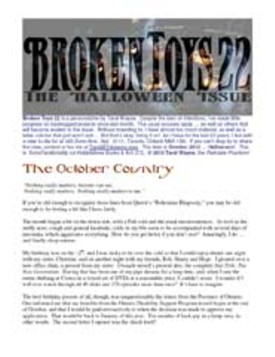 Broken Toys #22: October 2013. Monthly. 26-pages. Edited by Taral Wayne. This issue is subtitled: “The Halloween Issue.” Taral begins this issue with “The October Country” a highly personal, witty, and amusing autobiographical account, more of an update for those who have been reading his zine. Next is “The Undigitalized Man,” wherein Taral waxes lyrical about the archaic uses of books, Ray Bradbury, his writing, as compared to the benefits of computers. This is followed by “Walking With Spirits,” in which Taral, in keeping with his Bradburyesque sentiments discusses his views of Halloween, past and present, and the party he gave (complete with charming photo). The hard-to-define “Left Over Pieces” comes next. As titled, this segment has comments on past issues, notably by Earl Kemp (ha ha). It consists of several very long letters of comment interlineated with responses from Taral, including one letter from Lloyd Penney. Finally, Taral gets the last word in with “Timor Mortis Conturbat Me,” in which he makes some pithy insights into fanzine reviews and fanzine reviewers. This issue concludes with a reprint of the review done by Amazing Stories editor Steve Davidson. 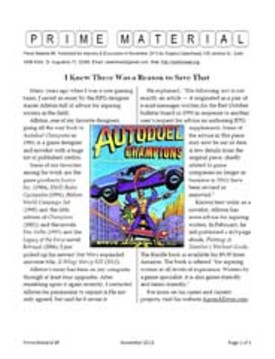 Prime Material #5: October 2013. Bi-monthly. 4-pages. Edited by Rogers Cadenhead. Rogers begins this issue with a delightful essay “I Knew There Was a Reason to Save That,” about saving essays. In this case the words of gaming designer and author, Aaron Allston. This is followed by one of those essays by Allston: “On Writing Supplements.” Allston twists the standard advice on how to write to fit into the hobby game category. This issue concludes with “Messages to the Prime Material,” complete with a loc from Lloyd Penney.

Three Rocks #4: August 2013. Bi-monthly. 4-pages. Edited by Rogers Cadenhead. This zine is essentially about and for comic fandom. Rogers begins with an article “’Pathfinder’ Comic Headed in Right Direction,” about this Eclipse Comic publication. This is a very enthusiastic read, and you can tell that Rogers is a big fan, but not an uncritical one, which is a good thing. Next Rogers gives with “All in Color for 40 Dimes” (with a tip of the hat to Dick Lupoff), about the growing costs of purchasing comics, and some insight into some of his current favorite comics. This is all followed by “Mailing Comments for CA 583.” This segment is very interesting. It gives insight into a related segment of science fiction fandom. And it is related. Contributor Jim Korkis discusses F. Towner Laney and Robert Lichtman’s compilation of his work Ah! Sweet Laney! 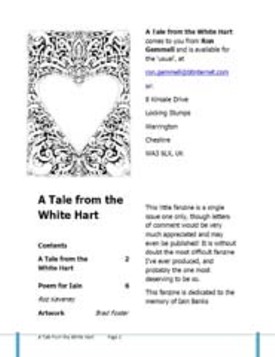 Well, that’s it for this week. As always, I’m eager to receive any and all fanzines (whether or not they are printed) for review. Just send them to me via Amazing Stories.