In this week’s viewing: An unexpected additional premiere made by Lewis Carroll fans, big news about a show coming up next season, and more!

Streaming license announcement season is supposed to be over, but all sorts of news broke last Friday. For a start, Crunchyroll has belatedly announced a deal to stream Kyousougiga, which will be reviewed below. Crunchyroll also notes one more unrevealed license on their lineup page, which may mean negotiations for Yozakura Quartet are in progress.

The really big news concerns an upcoming show called Space Dandy (which, incidentally, is quite not what it sounds like—the main character is named Dandy. There’s not a frock coat or a bow tie to be seen in any of the advance publicity). It’s being directed by Shinichiro Watanabe, who famously directed Cowboy Bebop, and that is probably the reason that it already has streaming deals for North America, Australia, and New Zealand, and it will air on Cartoon Network in the US. In fact, Cartoon Network has promised that it will be showing the premiere before it airs in Japan. You’ll still want to watch the stream, because Cartoon Network needs to squeeze in more commercials per half-hour than Japanese TV does, but this is a huge deal nevertheless. 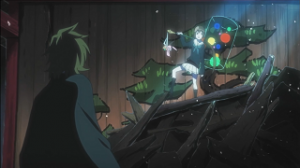 Kyousougiga #0-3—Episode 0 was reported to be a recap of the Web series, but instead it’s an incoherent, candy-colored maelstrom serving as a 30-minute trailer for the TV series. Skip it; there’s nothing to gain but spoilers.

Once upon a time there was a priest named Myōe who could make his drawings come to life. This frightened people, so he lived in seclusion in the countryside. A black rabbit that he drew fell in love with him, and was granted human form temporarily by a compassionate bodhisattva. They had three children, but Myōe’s gift still caused trouble for him, and so the family ultimately took refuge in a version of Kyoto he had drawn: the “looking-glass capital.”

Koto, the black rabbit, ultimately had to return to her original form, and she and Myōe departed, leaving the three children in charge and promising to return someday. And then one day, after untold years of waiting, a girl also named Koto appears in the midst of a storm and begins causing all sorts of trouble. Koto the girl has been trained by a multiverse-hopping organization known as the Shrine, which seems to have a connection to Koto the rabbit and to Myōe.

A rabbit and a looking-glass world? Yes, at one level it’s a Japanese-themed retelling of Alice’s Adventures in Wonderland and Through the Looking-Glass. It’s even implied that the priest and his family were alive around the same time as Charles Dodgson (and remember, Dodgson was an Anglican deacon). On another, it’s an exploration of what kind of story the creators can put together in a world with almost no rules. Mirror Kyoto has been able to accumulate all sorts of things from pictures drawn after it was created, so that it can contain, for instance, a scientist with a giant robot, a squad of sharply-dressed goons, and inhabitants who are only stick figures or completely abstract. Things repair themselves, so whole sections of the city can be smashed by various rampaging characters and be ready for another round of punishment the next day. The fact that there is a coherent story, especially one which manages to keep the urge to throw in tons of gratuitous damage at the periphery, is an achievement. 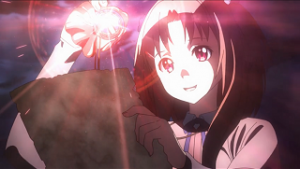 Galilei Donna #3—Hozuki has admitted to finding the airship plans in the attic when she was 10. But it seems that there was also a mysterious page of Galileo’s notes about the moon. Somehow she thought of holding it up to the moonlight and found that it revealed clues to a mystery so fabulous that she built the airship and prepared it to take the entire family to Japan.

Meanwhile, everyone else is still fumbling around with the new feeling of being international fugitives and trying to work out how to address basic needs like food and clean clothes. Also the world is apparently reaching peak methane hydrates. I’m glad the revelation that Adni Moon is behind the attacks on its rivals was brought out quickly, because pretty much everyone will have suspected that immediately.

I’m not sure if the name of the company is supposed to be referencing anything specific, but there sure are a lot of moons about. Three you may not have spotted yet: Hazuki, Kazuki, and Hozuki all have the character for “moon” in their names when they’re written in Japanese. 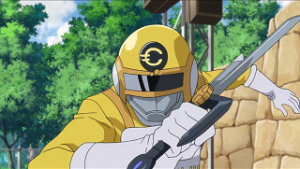 Samurai Flamenco #3—If this show becomes really popular, the one downside will be the inevitable cavalcade of adaptations of all the superhero shows they’ve made up to populate Masayoshi’s world. By the way, if you think the Money Rangers are clearly a huge exaggeration of actual existing superhero teams, there is a real, long-standing, occasionally Seiun-nominated franchise that recently announced a show featuring superheroes with a fruit theme.

I like how this episode handled the fact that in the modern world of cellphone cameras and video sharing sites, it’s practically impossible for a superhero to keep his identity secret. (Only in the top five, though? I wonder who he was losing to.)

And now, in one stroke, Masayoshi has gained both plausible deniability and a combat teacher, and Goto has been infected with the superhero bug. I sense a sidekick in Samurai Flamenco’s future. 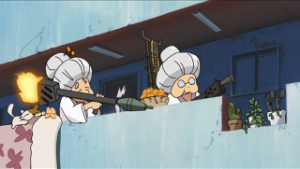 Kill la Kill #4—We take a break from the reflections on totalitarian states as Honnōji Academy celebrates an old school tradition, which, like most old school traditions, consists of making life difficult for the kids further down the pecking order. I become more convinced every week that part of the motivation for this show was to fight back against the idealization of high school which permeates so much of anime.

Maiko, the trap designer, is clearly a fan of platformer games, although since my household goes in mainly for RPGs and strategy, the only reference anyone over here can put a definite name to is Donkey Kong.

Review of After Earth starring Will and Jaden Smith.

A recurring theme in Amazing Stories #5 is the alteration of the human mind.

Examining the Story Starters for My Science Fiction Romance Novels

AMAZING THINGS: UC Riverside Eaton Collection May Be In Jeopardy