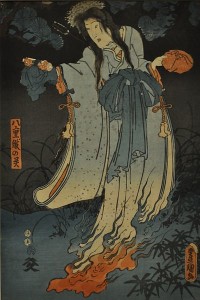 Every culture has its ghost stories. Here in the West, ours tend toward narratives depicting souls who died violent deaths and have returned to take revenge. Or perhaps we tell tales of those who have died too soon and only wish for eternal playmates. As I briefly mentioned in my post last week, the Japanese have a very rich and far-reaching pantheon of spooks. The majority of these ghosts and their stories grew out of the Edo period (1603-1867; thus why a show like Mononoke asserts itself as particularly Japanese horror), and ghost stories with a certain antiquated style to them, or an air of the past, are usually referred to as kaiden (mysterious or strange recited narrative), whereas more modern horror stories would simply be called hora (a Japanization of “horror”).

One of the most interesting things about Japanese ghosties and ghoulies, however, is the fact that they remain relevant to popular culture, at least where anime is concerned. In the States, we mostly just use the term “ghost” to refer to any dead spirit, regardless of its nature. But there are specific names in the Japanese vernacular for different kinds of spirits—those lost at sea (funayurei), those who are vengeful aristocrats (goryo), those who control the snow (yuki-onna), et cetera.  And outside of the spirits of the dead, there is a whole range of other spirits, including those who are playful, violent, reclusive, or merely lonely.

It is not uncommon for an anime series that has nothing to do with horror to make a reference to something like the chochinobake, a haunted paper lantern with one eye and a long tongue; or perhaps a reference to Nezumi Otoko or Sunakake Babaa, the Rat Man and Sand-Throwing Hag who were invented by Shigeru Mizuki for his series GeGeGe no Kitaro, and who both made it into everyday ghost parlance.

But even though GeGeGe no Kitaro is extremely popular in Japan (the original manga was first released in 1959, and there has been an anime every decade since the late 60s, not to mention a live-action film), it’s hardly the only series to draw from and expand upon ghost stories. GeGeGe no Kitaro hasn’t made it to the States yet, but Spirited Away, Hayao Miyazaki’s romp into the spirit world, certainly has. As rich 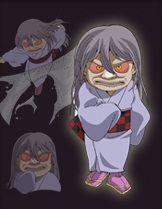 as Spirited Away is in themes and references, it is also extremely rich in its approach to the spirits inhabiting Yubaba’s bath house. Any of the spirits could have easily been tsukumogami, or inanimate objects that have reached a hundred years of age and are therefore now sentient. There are radish spirits and talking frogs in yukata and a host of strange birds and bugs and babies, all of whom, though they may not come from Japanese mythology directly, pay a very distinct homage to the Japanese idea of the spirit world. (I don’t know how many folks on this site are keeping up with Avatar: The Legend of Korra, but the two most recent episodes definitely drew from both Spirited Away and the general pantheon of Japanese spirits while detailing the exploits of the first Avatar.)

Another Studio Ghibli film, this time directed by Isao Takahata, Pom Poko could almost be a tale directly from Edo-era Japan. In this tale, the tanuki (Japanese raccoon dogs) are being forced out of their homes by land developers. These tanuki have lost many of their famed shape-shifting abilities, and thus must call upon the aid of older, more experienced tanuki. At one point, they stage a massive spirit parade, disguising themselves as chochinobake, various other tsukumogami, and a host of gods. Naturally, a kitsune, or a fox, later gets involved in their plot, helping the tanuki to adjust to life as humans.

The kitsune is probably one of the most recognizable and frequent members of the Japanese spirit pantheon. Kitsune appear everywhere, from Pokemon to Naruto to Yu Yu Hakusho to Sonic the Hedgehog, the parade of tricky fox spirits is never ending. Popular in such theatre forms Noh, kabuki, and bunraku, they often appear in anime as white foxes with red lines around their eyes, mimicking the Noh mask.

Stateside, we become very immersed in the scary and supernatural around this time of year, the weeks leading up to Halloween. And though some of us are engaged in a constant fascination with horror and the unknown, it seems that Japan has us beat for the supernatural living in popular culture. Perhaps a better understanding of Japanese horror’s history will allow more creepy animanga titles to see the light of day here in the West.