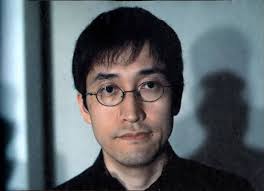 [Note: The following post contains some images that are visually disturbing. It is recommended that the reader use caution.]

Do you like your comics with heavy inking? With a bit of body horror? With gruesome forays into the darkest parts of the human psyche? With afterwords that border on slapstick? If so, allow me introduce you to the work of acclaimed horror mangaka, Junji Ito. Perhaps best known for his titles Tomie and Uzumaki, Ito actually has quite a long list of manga to his credit. Inspired by other mangaka, most notably Hideshi Hino (Hell Baby, Hino Horror Stories), as well as one of the most famous Western horror writers, H.P. Lovecraft, Ito has crafted story after story of the battle between honest, kind protagonists and a cruel, fatalistic world.

Only a few of Ito’s titles have been officially licensed in the US and translated into English: Gyo, Uzumaki, and Museum of Terror (which features the story Tomie in the first two volumes). Of these titles, I have read Uzumaki; I have also read a not-currently-licensed title of his, Cat Diary: Yon & Moo. They are vastly different titles, but I feel they are both very indicative of Ito’s character and his relationship to his audience.

Uzumaki follows the supernatural, spiral-themed events occurring in the town of Kurozucho (uzumaki is the Japanese word for “spiral”). These events — which include people twisting their bodies into giant spirals, people turning into snails, spiraled hair attacking people, and freak whirlwinds and whirlpools — are recounted to the reader by a high school student, Kirie Goshima, whose boyfriend, Shuichi, is the first in town to notice that something is amiss. The secluded town of Kurozucho is not unlike a Lovecraftian town; inexplicable bad circumstances arise all over town, not taking into account the moral worthiness of their victims. It is a town of doomed inhabitants, even to the end.

Visually, I find that Uzumaki is much easier to take in than some of Ito’s other works. I distinctly remember flipping through volumes of Gyo at the bookstore in my teenage years and deciding that walking fish monsters were still a little too far out of my comfort zone. I feel similarly now, but for some reason the images in Uzumaki, while thoroughly terrifying and often downright gross, don’t set me on edge in the same way. 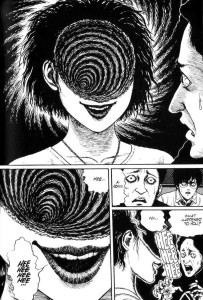 Perhaps it has a lot to do with Ito’s incredibly delicate drawing sensibility; looking through his work one can sense that not a single line is out of place — and he certainly uses lots of lines. Here is one of my favorite pages, and one which I think is very consistent for his style throughout the entire three-volume series:

While Ito’s drawing style is fairly recognizable from series to series, Cat Diary: Yon & Moo is a far cry from the likes of Uzumaki. Aside from being more sparse with ink, Cat Diary is actually a comedy, albeit one that acts like a horror title. In an absolutely brilliant move, Ito has written an autobiographical account of his interactions with his fiancee’s two titular cats. Not being a cat person himself, and not understanding the care and keeping of the feline creature, Ito has created a caricature of himself that is able to point out all the absurdities of cat ownership. And the best part about it is that he constantly has pages that look like they should be coming out of one of his scarier titles; his reactions to the cats, as well as some of his fearful fabrications about them, result in some of the scariest slapstick to grace the pages of a comic book. This story is also of particular interest to cat owners and their loved ones. I can’t even begin to describe how often I laughed out loud because of some silly cat-ism that I could relate with so well. 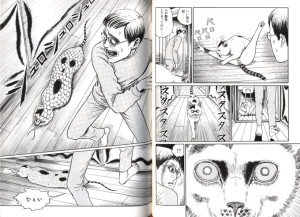 To be honest, the afterwords of every volume of Uzumaki are also graced by this caricature Ito, and I think that’s my favorite part — knowing that the man behind all the twisted (sometimes literally) horror is a really funny and kind of anxious guy is comforting. He is deeply interested in what scares people, but he has a sense of humor about his work (which is fair, considering that before he was a mangaka, he was working as a dental technician — isn’t life funny?).

I would highly recommend Junji Ito’s work. As an artist, he is a technical genius. As a storyteller, he has a flair for the absurd.  And as a human being, he comes across as being humble and likable, and I like to think we all enjoy supporting an artist with whom we wouldn’t mind sharing a cup of tea.