I have a favorite painting.

It’s not a science fiction or a fantasy or a horror painting. It’s by a twentieth century American artist named Edward Hopper. 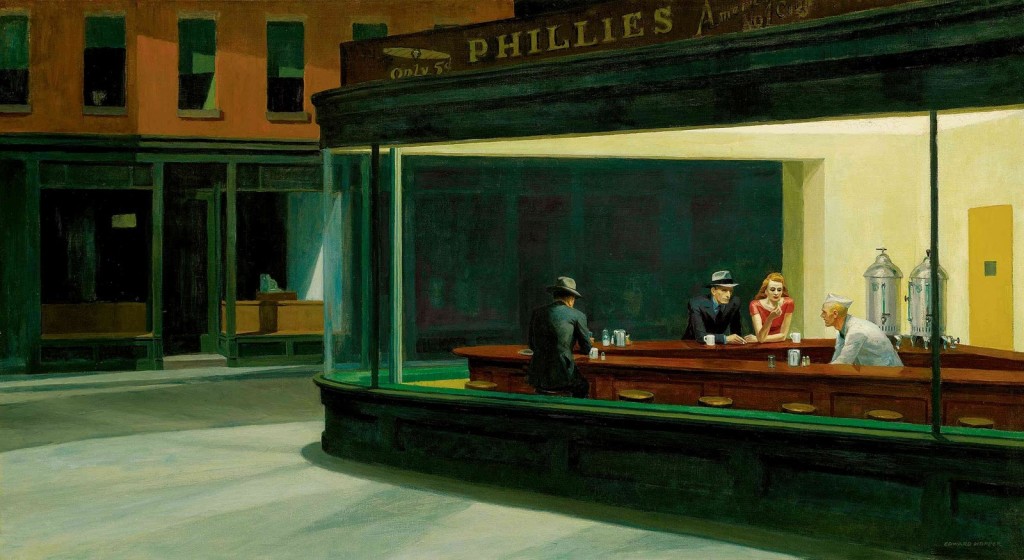 The painting is called simply Nighthawks and it was painted in 1942. You’ve probably seen it or seen some variation of the scene. You may not know it but it’s a safe bet that most people recognize it somehow.

As you can see, it depicts three people sitting at a diner at night. The painting seems very simple and yet it is a very powerful composition that elicits a complex series of emotions in the viewer. At least it does for me, which is why its one of my favorites.

Nighthawks looks like it could be an illustration for a story. There is some sort of interplay going on in the scene, yet many of the figures are isolated and alone. There is a sense of loneliness about the whole scene. The painting, as with all great art, asks a lot of questions. In the case of Nighthawks, it offers up a tantalizing series of mysteries and leaves them with the viewer to solve them.

The painting inspired me to try to solve the mystery. As I am a writer as well as an illustrator and a life long science fiction fan, I decided that the painting’s mysteries needed to be more fantastic than mundane.

I was sitting at the counter of my favorite diner in Greenwich village. It’s right at the corner of Mulry. You remember? The one with the big curved window? It’s not there anymore, of course. It’s just a vacant lot now, but back in 1942 it was a diner, one of the best in New York, in my opinion.

I was sitting in my usual seat finishing a cup of coffee and waiting for Danny to come up with my bowl of chili. Danny made good coffee and decent sandwiches, but he made a great bowl of chili.

Anyway, there we were, me and Danny, late on a Tuesday night when this couple walked in. I remember the fella was a tall drink of water with deep-set eyes under the brim of his fedora and a long, pointed nose. The woman was a looker—red hair and a red dress—a nice shape, but pale.

They paused in the doorway, like they were assessing the place. Then they walked in together. Not arm-in-arm, but slowly and in step. They had to pass behind me to get to the seats they wanted. As they passed I breathed in, trying to get a whiff of the woman’s perfume. Nothing. No odor whatsoever.

They walked all the way around the angled counter to the two farthest seats in. They sat quietly and said nothing. The man reached into a pocket and pulled out a single cigarette, then leaned forward, his elbows on the counter, and stared ahead, seemingly at nothing. He made no move to light the cigarette. The woman was holding a compact in front of her face. I remember it because it was bright green and shiny. She made no move to open it. She just stared at it.

“Coffee?” Danny asked. The man nodded—a barely perceptible dip of his head—and Danny set them up.

Danny is dead now. He was an old man back then, but you wouldn’t know it to look at him. He had a full head of hair and his smile was one of the most youthful I’d ever seen. He was quick with a joke and went out of his way to make sure everyone in his place was happy. “Late night or early morning?” he asked the couple. It was something he often asked late-night patrons.

The man regarded Danny with a look of confusion. The woman didn’t look up at all.

Danny’s expectant smile faded in the face of the man’s stare. Danny dropped his eyes and turned away, catching my eye as he did so. I gave an slight shrug, as if to say It takes all kinds… and Danny topped up my coffee. “Where’s that chilli, Dan?” I asked.

“It’s comin’, Mike. Keep your shirt on.” Danny tried to smile, but he seemed a little rattled.

Two minutes later Danny placed a piping hot bowl of chilli in front of me. He handed me utensils and crackers, gave me a smile and a wink, wiped his hands on his apron and then went into the back of the diner, through the swinging door with the little porthole in it.

The chili smelled incredible, as usual, and I dug my spoon in eagerly. Before I could get it to my mouth, the man in the fedora piped up:

“The towers will fall,” he intoned. His voice was deep and seemed to come from deep in his chest and the sound of it sent a chill up my spine.

I looked up to see him staring at me, his deep-set eyes seemed to be trying to burn their way out of his skull. “Sorry?” i managed, my voice sounding a little weak to my ears.

“First one tower, then the other. They will fall in fire and smoke.” The man just kept staring at me from under the brim of his fedora. I blinked. I wasn’t sure what to say or do. “What towers?” I asked.

The man blinked then and turned to the red-headed woman. The woman gave him a look and then went back to consulting her compact. This time the man seemed interested in it as well. The man scowled and the woman pursed her lips. She touched something inside the compact and both of them vanished into thin air.

I froze, my mouth hanging open and my eyes goggling at the place where the strange couple had been a few seconds ago and then suddenly weren’t.

Danny came back behind the counter and saw that the couple were gone. He went over and picked up the still full coffee cups, looking for payment on the counter and finding none. He turned to me. “Did they say anything?” he asked, then furrowed his brows at my expression. “What’s the matter with you?

I don’t know why I didn’t want to tell Danny what the man had said or how they vanished. Maybe I was afraid that Danny would call the guys in the white coats. For a moment I was almost afraid that I really would need to be taken away.

I felt a cold chill all over and I just wanted to forget it ever happened.

Danny took the cups and dumped them in the sink. “Lousy chiselers”, he muttered.