A couple weekends ago I experienced the rare opportunity of having nothing to do. So to celebrate I sat down and just read. Now I can share with you the fruit of that unproductive weekend by reviewing for you the entire Long Earth series by Stephen Baxter and Terry Pratchett. 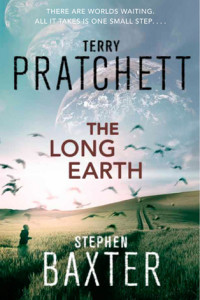 A couple weekends ago I experienced the rare opportunity of having nothing to do. So to celebrate I sat down and just read. Now I can share with you the fruit of that unproductive weekend by reviewing for you the entire Long Earth series by Stephen Baxter and Terry Pratchett.

There are only two books in the series so far and they are both quick reads. The premise is that in the near future humanity discovers a seemingly infinite number of parallel Earths that can be reached by a process called “stepping”. The great thing about stepping is that it is relatively easy for humanity. All you have to do is build a stepper (powered by a potato) and click west or east (the arbitrary designations for which direction you are travelling along the Long Earth). Except for not being able to carry iron with you and the 15 minutes of nausea most feel after stepping, the process is completely painless. If the technology doesn’t make sense to you, don’t worry. It is implied throughout the series that a stepper might just be a crutch for humans who already have a natural ability to do it and the process of completing for stepper (which will only ever work for the person who finishes it) just unlocks that natural ability. In fact there are many natural steppers, including our protagonist, as well as people who can’t step at all and they act as the antagonists in the first book.

People expecting a vast array of alternate histories in this multiverse will be vastly disappointed. As far as the characters know only “Datum” (our Earth) is the only place where humans evolved. Thus, human history is sort of static and almost insignificant to reality, which is sort of a Lovecraftian idea honestly, which I liked. Most of the Earths, instead, are geologically different. There are Earths where the Ice Age never ended, where Dinosaurs never died out, some full of giant bugs, some without a Moon and some where the Earth was destroyed long ago. If you want an idea of what some of these worlds would be like check out What If the Moon Didn’t Exist? Voyages to Earths that Might Have Been by Neil F. Comins.

Even without advanced human civilizations to leech off of (i.e. the Paratime series by H. Beam Piper) that doesn’t mean humanity gets nothing from this multiverse. Suddenly scarcity no longer effects the economy as everyone can get as much gold and oil they want, crashing the economy. Although transportation at first has to be done by individual humans, the later (re)invention of helium-filled dirigibles (called “twaines”) to transport people and cargoes across the infinite Earths ends that problem. Meanwhile, nations lose their work force as people and their families uproot themselves to seek a better life in the endless series of Earths. While some simply use the neighboring Earths to expand their gardens, others dive deep to live out a pioneer lifestyle reminiscent of 19th century (in fact there are many references to steampunk throughout the book), virtually autonomous from their Datum government due to the difficulty of travel and communication. Some even live a nomadic lifestyle, travelling across the parallel Earths literally surviving off the low hanging fruits, only rarely returning to civilization when they finally miss human companionship.

Still there are a lot of unanswered questions concerning this multiverse. Does it ever end? Are we really alone out there? More importantly, why did we discover this now at the moment when we were at the cusp of making Datum Earth unlivable? These questions drive the main plot of Long Earth, the first book in series, as we follow Joshua Valienté, a natural stepper as he travels with Lobsang, a vastly intelligent artificial intelligence who is (allegedly) the reincarnated soul of a Tibetan mechanic. While traveling in an experimental airship, they seek to reach the Earths a million steps from Datum and see what is there. On the way we learn about the fateful Step Day where humanity learned about the multiverse and the two speculate on the reason and nature of the infinite Earths. Meanwhile, they make contact with primitive humanoids, all natural steppers. Some, like the trolls, are curious and friendly, while others, like the elves, are violent and hostile to humans. Nevertheless, they and other species, are migrating. Something is driving the humanoids toward Datum, which Joshua and Lobsang must confront before it threatens all of humanity.

I enjoyed The Long Earth. It was a good combination of hard SF and fantasy, playing to both authors’ strengths. I liked how they worked in how the various humanoids could be responsible for the variety of faeries and other mythological humanoids scattered through human history. The characters dialogue could be a bit stiff and unnatural at times, but considering that most of the major characters are either anti-social loners or a machine intelligence, I ignored it. People who read Wild Cards II: Aces High might find the climax to be familiar, but then again it is (without giving it away) a popular trope in genre literature in general. The actual ending, however, is a powerful reminder of what can happen if someone follows their dreams and how that affects those they leave behind. All in all, I liked The Long Earth and I wish I can say the same for the sequel. 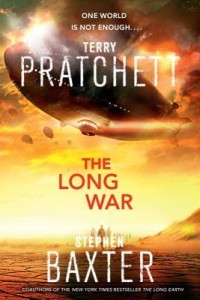 The Long War sees Joshua, Lobsang, and other minor characters from the first book return. A new generation has grown up knowing nothing but the Long Earth, but again there is trouble brewing and we learn about through multiple sub-plots. The Datum American government is very hostile to the pioneers who left home and there is anti-troll sentiment rampant there and through the colonies. The trolls, whose voluntary labor was important for the colonial economies, are starting to disappear. They are leaving the worlds humans inhabit out of fear of further mistreatment. This has prompted one colony to declare independence, prompting Datum America to send a fleet of military twaines on a good will journey across the alternate Americas which will end in a final confrontation with the wayward colony. All of this is happening during strange geological activity at Yellowstone and a Chinese expedition to the far reaches of the Long Earth.

Fans of Star Trek might enjoy the parallels found during the sub-plot of the military twaines travelling the multiverse, righting wrongs, etc. Sadly, that is one of the few good things I can say about the sequel. The multiple sub-plots meant there were some I liked more than others, meaning I became annoyed when I had to slog through one to get to another I wanted to read. I mentioned before my issues with the dialogue in The Long Earth, but it just got worse in The Long War. I just don’t buy that is how people talk to each other. I just felt every conversation was uncomfortable for the characters.

Meanwhile, the human antagonists in The Long War were just a bit too obvious. The anti-colonial American president’s rhetoric and appearance were both unappealing. Perhaps it is just me, but I like something appealing about my villains because I’ve grown out of the nasty and incompetent cartoon bad guys of my youth. I want my bad guys to be realistic, not stereotypes. The Chinese, meanwhile, almost seemed like insecure caricatures of Chinese, to the point that one character reprimanded another for comparing a creature they found to a T-Rex instead of something from China’s fossil history.

Finally, I am always annoyed when authors use the word “war” in their title and do not deliver. You saw this happen with The Protector’s War by S. M. Stirling and, again, in The Long War. Don’t tell me I missed the point the authors were trying get across about war in universe without scarcity and where everyone has the ability to go where they want, whenever they want. No, I get that, but if you look at the description of the book and how it was marketed, you see that someone is trying to sell you this book based on the action you are expected to see, not the philosophical discussions you end up getting.

I don’t know exactly how to conclude this review. Although its not unusual for a sequel to not be of lower quality than the original, I still liked The Long Earth enough that I am really disappointed that I can’t recommend The Long War. This is an issue because The Long War did end on a major (if obvious) cliffhanger. I don’t know whether I will read the next book when it comes out, but I can at least say with some confidence that you should read The Long Earth, but read its sequels at your own risk.

Zombies Is Stoopid. Characters Is Too.

Examination of the Eduadorian author Leonardo Wild and his novel Unemotion, first published in German, then translated to Spanish

Assuming we can travel into the past, we have to accept the fact that we will change something just by being there.

Speculative Poetry Round Up October 2014