It’s time to wrap up the shows we’ve been following this past season and look at the first harbingers of the new one. 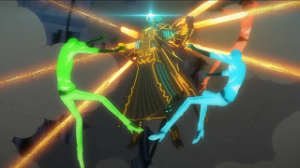 Gatchaman Crowds #12 – Rui’s final, fateful decision is to give everyone superpowers and trust that those who want to use them constructively will outnumber the griefers. It’s the polar opposite of the entire superhero genre, and indeed much of sf, to say that the specially chosen heroes need to be less special and quit guarding their power against an overwhelming fear of misuse.

O.D. finally gets a chance to show off his Gatchaman form, in one of those fantastic but easier-than-advertised confrontations that leaves you asking why the villain couldn’t have been polished off at any previous given time. I think I’d accept the argument that Berg-Katze would only have been willing to show up to an arranged meeting when he thought he’d already won, and that the collateral damage from O.D.’s “wings” could have been considerably worse if Berg-Katze hadn’t stabbed him.

The ignominious end of the centuries-old destroyer of worlds is to lose his powers and be locked in a struggle with Hajime until one of them can corrupt the other. Yeah, my money’s on Hajime.

Final verdict? Well, anyone who’s a fan of the original Gatchaman is probably livid at what’s been done to their beloved franchise, and I can’t see why this couldn’t have been done with a few small changes as an all-original project. I have a few quibbles with the storytelling– particularly that the time eaten up by the recap last week could have come in handy this week to show more of the effects of the CROWDS avatars on Japanese society, or whether O.D.’s wounds were fatal or not– but as pure sf, this was terrific. As I said early on, this is the first work I’ve seen in any medium to really grapple with the implications of social networking and gamification, and I think it’s done an impressive job. 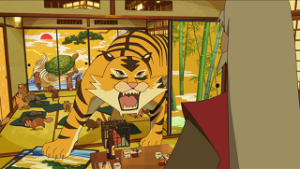 The Eccentric Family #13 – And so, with Sōun Ebisugawa fleeing in disgrace, two of the finest restuarants in Kyoto destroyed, and the city repairing the ravages of a drunken streetcar and an angry tengu, the karmic wheels spin and the new year brings a fresh start.

The buildup last episode promised a madcap collision of every remaining plot thread, and this one made good on it with all possible chaos and confusion and tanuki running in all directions. And when all the smoke clears, the professor and Benten are reconciled, the Shimogamo family is reunited, and the Friday Fellows have had to give up their tradition for a year. What more can you ask for?

It really wasn’t clear at the outset where this story was heading, but it’s been a wonderful journey. It’s been funny, sad, and heartwarming by turns, and none of it has ever felt forced. There’s hardly been a frame of animation that wasn’t drop-dead gorgeous. I really cannot recommend this one highly enough. 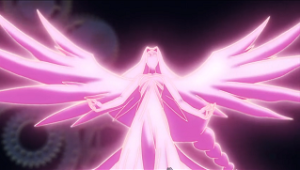 Day Break Illusion #13 – This ends in shambles too, but not the good sort. Having abandoned any kind of plan or statement it may have had in mind from the beginning, it just throws in a bunch more haphazard fighting and emoting and calls it a day.

Etia and Ariel turn out to be able to kick some serious demon artifact hiney when they get the chance, but it turns out their powers can be arbitrarily turned on and off as the plot requires. Akari is able to destroy her counterpart card because the writer has forgotten about the reciprocal injury that should cause, or because she’s just really awesome. Ginka pops back to life because, well, I guess it would’ve been too much of a downer if she stayed dead.

It started off with such promise, but never managed to fulfill it. The art’s been really nice to look at, but not worth the rest of it. Cross this one off your list. 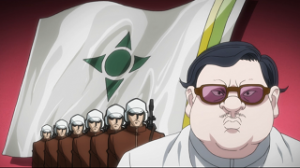 Hunter x Hunter #98 – We now return you to the main story already in progress, starting with the author’s clever plan for killing five million people in less than two weeks without anyone really noticing.

It works because East Gorteau is basically North Korea, from the paranoid family-destroying utter control of personal life to the elite living off foreign aid to the short, pudgy, sunglasses-wearing dictator (this section of the source manga dates from 2005, so it’s Kim Jong-Il rather than the current guy).

The phonograph in Marcos’s apartment is playing Mozart’s Requiem Mass in D Minor, which last popped up on this show back in the Yorknew City arc when the Phantom Troupe was massacring the world’s assembled mafiosi. I don’t know if that’s meant as a comment on the Gorteau regime’s atrocities, or the Chimera Ants’ ongoing work, or if the series composer just really likes Mozart’s Requiem. 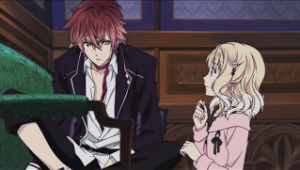 Diabolik Lovers premiere – Yui, our heroine, has been sent to live in a big gothic house by her father, who is implied to be a priest, which is a little awkward because most Christians in anime are Catholics. But the story’s vagueness on canon law is the least of her problems, since the house turns out to be inhabited by six evil bishōnen vampires with color-coded hair, all of who want her. Blood, that is, but it doesn’t spare a chance for innuendo.

Or worse. This episode runs 15 minutes, at least 10 of which are taken up by Yui being groped, licked, and grabbed by the various brothers. Yui breaks loose and runs around the house (but apparently doesn’t think to run out) and winds up in a mysterious room with a diary that just happens to reveal that she’s adopted. Then the vampires close in again. Tune in next time for more harassment action!

This is an adaptation of an otome game, so this situation is required to eventually lead to True Romance somehow, because the point of an otome game is that the heroine is presented with a whole menu of bishōnen and gets to hook up with all of them in turn.

If nothing I’ve said yet has managed to put you off, well then, this is the show you’ve been looking for. 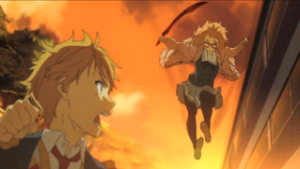 Beyond the Boundary premiere – Akihito Kambara is half-human, immortal, and able to recover almost instantaneously from any wound, so he doesn’t take it too badly at first when he tries to talk a girl out of jumping from the school’s roof, and she thanks him by conjuring an enormous sword and stabbing him though the heart.

After a week of being used for target practice every day after school, it’s another matter, but by now his hunter, Mirai Kuriyama, is ready to start opening up about her life. She’s a Spirit Warrior, coming from a long line of monster hunters, but with a unique ability which makes her feared and hated by other Spirit Warriors. Outside of monster-hunting mode, she’s shy and awkward, and Akihito finds himself reaching out to try and help her gain confidence, despite being warned by another Spirit Warrior to stay away from her. By the end of the episode, they’re teaming up to fight a monster which is haunting Mirai’s apartment.

Beyond the Boundary is a little unsteady in places, but off to a good start on the whole. It steers clear of any obnoxious tropes, and the two main characters are genuinely nice people who you want to see become friends.

OFFWORLD makes a nice addition to the exploration and experimentation that Adam Savage is known for.

The Invasion by Robert Willey takes us back to the era of a war torn United States fighting the good fight. At the same time, the story also opens the reader’s mind to some of the most fantastic speculations in space travel of the period.

Anyone For a Bit of DC on TV?

The Orbital Reflector, launching in 2018, is the world’s first space sculpture

The Fuzzy Line Between Science Fiction and Fantasy