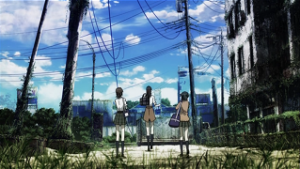 Coppelion premiere—Sometime in the future, Tokyo has been abandoned due to some unnamed calamity. Humans are only able to survey it by wearing special protective clothing, or using remote robotic systems. Actually, that seems to largely work, which removes the whole reason for the show, which is that now there are genetically engineered children who can visit it without the need for the protective clothing.

Anyway, there they are, wandering past abandoned buildings. They find an explorer who’s gotten sick and render first aid. Later, they meet a dog. (The disaster supposedly involved radiation, from what I’ve read about it, but it doesn’t seem to be causing the local plants or wildlife any trouble.)

Coppelion was advertised as an action-adventure with lots of heart-pounding chase scenes and fighting and shooting, but this episode contains absolutely none of it. Just a lot of walking around and establishing character quirks. 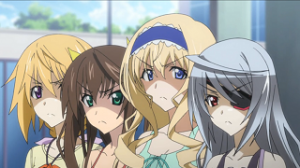 Infinite Stratos 2 premiere—In this future, mecha are needed to defend Earth, but can only be piloted by women—and by one teenaged male, Ichika Orimura. Ichika therefore has to attend an otherwise all-female pilot school, setting the scene for a thoughtful exploration of adolescence and gender.

No, I’m kidding. It’s a harem show. Basic formula, for those not familiar with the term: take one clueless guy, find an excuse to surround him with beautiful girls, and have all the girls obsess about the guy as though he’s the only one in the world while the guy remains clueless. When not plotting how to make Ichika their boyfriend, the girls have time to think about other stuff like whether their clothes are cute enough or their bosoms are big enough.

There’s some business about an evil mech pilot attacking a base somewhere, but the main focus of this episode is setting up one of those misunderstandings that is only possible if everyone involved has never seen a harem show.

The voiceover in the preview for the next episode is a bunch of inane giggling. Please do not watch this show. 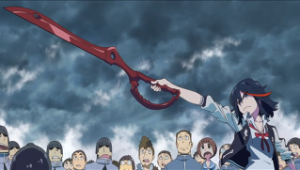 Kill la Kill premiere—Honnōji High School is a tough school. A very tough school. It’s the sort of place where a student caught stealing is left hanging naked and dead at the gates as an example to everyone. Student council president Satsuki Kiryūin rules it with an iron fist and the help of magical school uniforms that enhance the fighting abilities of her chosen lieutenants. But new transfer student Ryūko Matoi arrives ready to challenge Satsuki’s rule, even if it means fighting her way through every single one of the underlings. She seems to have no chance at first, but on a trip back to her dead father’s house, she find a school uniform so powerful that it has a will of its own, which demands that she use it to fight her way to the top.

This sounds grim, I suppose. It’s not. From the very first moment where the head of the disciplinary committee smashes his way into a history class (on the rise of Hitler, just to hammer the point home) to apprehend an offender, to the final showdown betweeh Ryūko and a superpowered boxer, it’s an almost nonstop barrage of goofy, overpowered fight scenes with a frenetic art style to match. It’s so totally over the top, it’s in low earth orbit by the end of episode 1. Huge fun. 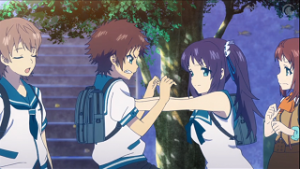 Nagi no Asukara premiere—Four friends are going to a new middle school because their old one has closed down. Along the way, a chance encounter between one of them and a boy from the new school seems to be leading to a first crush between the two of them and jealousy on the part of another friend.

It happens that the four friends live underwater. Humanity is divided into ordinary humans who live on land and those who spend most of their time in the ocean, able to breathe underwater thanks to a special membrane. If they stay on land too long, the membrane dries out, but there’s apparently no problem with the kids being out of water for a normal school day.

Normal is in fact the operative word for most of this show. The underwater city looks just like one on land, aside from the fish swimming by. Light, gravity, and fluids all work exactly like they would on land most of the time. There’s no real sense that they’re really underwater. It’s very disappointing.

International stream: Crunchyroll (Territories not specified, but US and Canada at least) 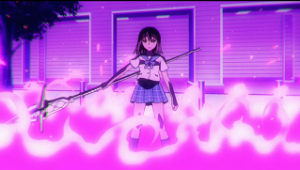 Strike the Blood premiere—Ikegami Island is a sanctuary for all sorts of magical beings that have been nearly wiped out by humans. Kojō Akatsuki was a normal human living there until a few months ago, when he was forced to become an especially powerful vampire. Still trying to live like an ordinary high school student, he discovers that he’s being stalked by middle school student and officially selected demon hunter Yukina Himeragi, whose mission is to observe him and see if he needs to be killed. After various meet cutes, they appear to be striking up a friendship.

It’s hard to care. The central characters are the least interesting part of the story and every part of the plot involving them feels forced. 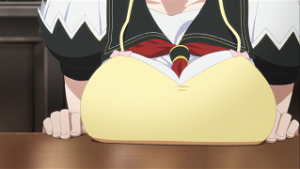 I Couldn’t Become a Hero, So I Reluctantly Decided to Get a Job. premiere—The setup promises an interesting idea or two, but all the production effort has gone into rendering the female characters’ underpants and their enormous wobbly breasts. 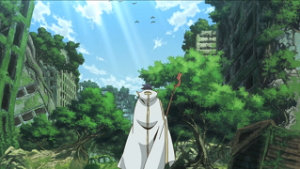 Log Horizon premiere—This latest entry into the gamers-trapped-in-a-game-world subgenre has some things going for it. The central character has been playing a mage, so we can expect him to really understand and think about what’s going on. All the main characters are familiar with this type of story. Ruined Tokyo (the game setting is a post-apocalyptic world) is way more photogenic here than in Coppelion.

All that’s accomplished in the first episode is establishing the situation and recruiting the first couple party members, so it’s hard to judge how this one is going to go just yet. But I can say that at least it doesn’t look like it’ll be outright terrible. 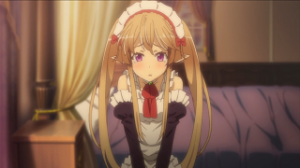 Outbreak Company premiere—If you’re an anime studio looking to make a sure thing that will sell a predictable amount of collector Blu-Rays and associated merchandise, why not play it really safe and make the main character exactly the sort of person who collects tons of anime merchandise? And then, to make extra sure, surround him with a few examples of the sort of thing he probably likes to collect?

So meet Shinichi Kanō, otaku extraordinare, who answers a job ad and finds himself appointed an ambassador to an alternate world on a mission to spread Japan’s entertainment culture. The main people he will be interacting with there are a half-elf in a maid outfit, an SDF officer with an impressive bustline, and the young empress, who is the living embodiment of moe little-girl-ness. If this doesn’t make you want to hurry up and pre-order posable plastic figurines of everyone involved, you are not the target audience. 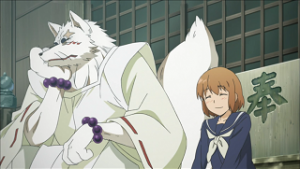 Gingitsune: Messenger Fox of the Gods premiere—The fox spirit Gintarō has served for 15 generations as the gods’ messenger to a small harvest shrine. He had a partner for a long time, but he or she vanished a century ago. The current miko (a sort of Shintō shamaness who tells fortunes, performs exorcisms, and assists with ceremonies) is teenager Makoto Saeki. They get along very much the way you’d expect a grumpy old man and a teenage girl to.

Makoto wants to impress a popular but unfriendly girl by telling her fortune; when it goes badly and Gintarō complains about being forced to do unimportant things, they have a falling out. Gintarō wanders off to grumble to some other spirits while Makoto reflects on her screwup, discovers an important matter that really does require Gintarō’s assistance, makes up with him, and learns that the popular girl has a nice side along the way.

Okay, so the plotting is currently at about the afterschool-special level of sophistication and the animation looks rough some of the time, but it’s a nice change of pace, and the opening sequence—and that matter of Gintarō’s partner—hints at more interesting times to come. 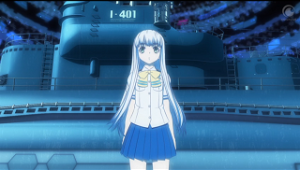 Arpeggio of Blue Steel premiere—In the near future, the rising ocean is not only inundating the land, but it brings with it the mysterious Fleet of Fog, which has taken over the world’s oceans. Communications satellites have been shot down, so that nations without land borders can hardly communicate anymore.

Gunzō Chihaya was a naval cadet until the avatar of a Fleet of Fog submarine found him and announced that her last order was to place herself under his command. Declared a traitor, he and his friends are now mercenaries, taking on the Fleet of Fog ship by ship. He’s about to take an unusual job: Japan has developed a weapon that may be able to help humanity take back the oceans, but doesn’t have the ability to manufacture it en masse anymore. Gunzō and his crew are tasked with smuggling the plans across the Pacific to the fractured remains of the US.

All that and there’s still time for naval battle sequences. I brought in the household military history expert to take a look, and he says that every ship show either in the episode itself or the closing credits has the name and general appearance of a real historical Imperial Japanese Navy ship. (For those of you wondering why you never heard about Japan having enormous submarines, they were commissioned too late in World War II to see any action. All the I-400s were captured by the US Navy, studied a bit, and then scuttled in 1946.)

The war buffs are going to love this show. For the rest of you, it’s got the makings of a decent plot and characters so far, though a few people may be put off by the CGI used to animate the human characters, as it makes some of their movements look robotic.

What shall we follow this season? At this point, I’m inclined to give Kill la Kill, Gingitsune, and Arpeggio of Blue Steel at least a second look. Beyond the Boundary, from last week, would be on the list too if it weren’t restricted to North America.

But wait, there’s more! There are nine more SF anime series with international streaming deals to check out. I’ll run through those next week, and then the week after, I’ll cover the second episodes of all remaining candidates, pick up Hunter x Hunter again, and make the final cut.