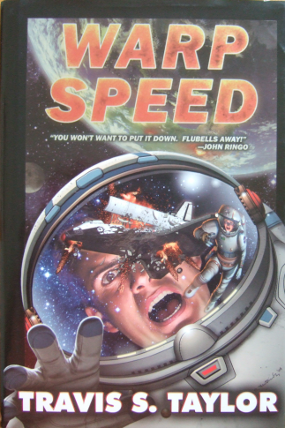 I confess that the idea of Warp Speed attracted me from the moment I first read its snippets on Baen’s Bar, to the point where I broke with my standard rule of not buying hardbacks from a new author until I’d actually read the work. Do I regret that decision? It’s hard to say; there are bits of Warp Speed that I like and bits that make me want to throw the book away (or at least give it to a charity shop.)

Write what you know, as the old piece of advice for writers suggests, is a double-edged sword. On one hand, a writer may write with great attention to detail when he talks about something he knowns intimately; on the other, he may forget that the prime purpose of his work is to tell a story and others may not find the details so fascinating. Warp Speed has good ideas, but at the same time it suffers from many problems caused by the writer being too close to the subject.

The main character (the book is told in first person), is Doctor Neal Anson Clemons, a brilliant physicist and martial arts expert (and something of a Mary Sue, being based on the author himself.) His dream has always been to reach the stars. At the start of the book, he and his team have achieved a breakthrough that can lead to both a workable warp drive and a new energy source powerful enough to make the drive more than an interesting theoretical concept. Working with a USAF officer and astronaut, Tabitha Ames, they start work on building a working drive. However, certain enemy nations (the Chinese) have their own plans for the drive … and they intend to destroy it before it can be used to reach the stars.

This is a cool concept – and there is much in the book to like. There is a vision of the promise of technology that pays no heed to idiots who see technology as the ultimate evil, a view I fully support. There’s some great action, including a handful of nail-biting moments. The science is hard, the women are beautiful; what’s not to like?

However, the book also has its weaknesses. Chief amongst them is that it is poorly paced, with jumps forward in time that can be difficult to spot. Worse, IMHO at least, the enemy are thoroughly stupid. There is one threat to future Chinese dominance of the world, the warp speed research team. However, despite a clear ability to track the team, the Chinese never seem to actually kill them. Instead, they indulge themselves in what I can best call random terrorism. Why not threaten the American Government into submission? They clearly have the ability to do so. Coming to think of it, why doesn’t the American Government retaliate with nukes?

As a character, Neal is far too good to be true. He is a scientist, but also an expert in martial arts – and the President hangs on his every word. In one place, the action stops while he discourses on the problems China has when facing the world – quite valid points, I must admit, but also unnecessary.

There’s also a thoroughly unrealistic picture of technical development. Neal and his crew invent more than just the warp drive, they invent advanced medical technology … and they do it all very quickly. Remember the EE ‘Doc’ Smith books where technology was driven forward at an astonishing pace? It happens here too. I wish technology could be forced forward so quickly, but I doubt it happens in real life.

But it was the ending of the book that had me screaming in frustration. Instead of using the technology to start a new explosion into space, the inventers who produced the warp drive are sent to a secret moon base to carry on their work, leaving the rest of the world utterly ignorant of what just happened. They could have opened the skies, ensured mankind’s survival and started moving industrial production into space, laying the groundwork for a bold new era that would rejuvenate human development and turn Earth into a garden. At the very least, they could have handed over the tech for ending the dependence on oil, once and for all.

I’m pleased to report that many of Taylor’s later books are much better. This one, however, has too many problems for me to wholeheartedly recommend it to anyone.