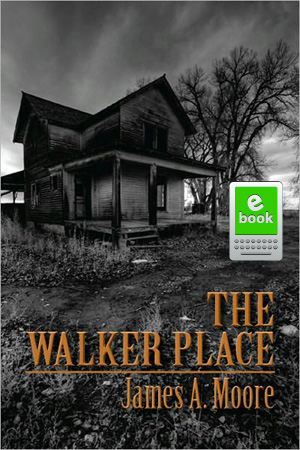 “The Walker Place”
James A. Moore
Cemetery Dance
Ebook (mobi and ePub files in one download for $0.99)

If I’ve read the calendar correctly I will write six posts before Halloween. So I’ve decided to review horror and dark fantasy rather than science fiction for those posts. Sort of a Six Weeks of Scares theme.

I’m kicking things off with a review of a short story, “The Walker Place” by James A. Moore. I recently reviewed his first epic fantasy novel, Seven Forges, over on my own site. I’d not read Mr. Moore’s work before, but I was pretty impressed by how he handled epic fantasy. Since he’s been writing in the horror field for a while, I decided to give his work in that area a try. Cemetery Dance had a special offer last year, an all you can read ebook special. I took advantage of it and loaded my ereader. I’m still making my way through the selections I purchased. One of them was “The Walker Place.”

This is a creepy Halloween tale that isn’t for the faint of heart. If you are uncomfortable with stories in which children are threatened (or worse) with bodily harm, then you might want to give this one a pass.

It’s about three boys who sneak out on Halloween and break into what’s known locally as The Walker Place. The Walker family was murdered there some years ago. Noe of the adults will talk about it. None of the boys know exactly what happened, but they know all the rumors about who the killer really was and how the murders were committed. The ambiguity of the events and the contradictory explanations only add to the boys’ fear of, and attraction to, the house. Of course the house has a reputation for being haunted.

The story is told from the point of view of an eleven year old boy. I liked the way Moore handled the kids in his story. They aren’t the sanitized and saccharineized children you see in Disney movies, nor are dysfunctional little psychopaths. Rather they’re normal eleven year old boys. Being the father of an eleven year old, and having been one myself once, Moore’s depiction of the three friends rang true for me. They have their own pecking order, but we also see how much of the bravado is bluster. When the narrator realizes one of his friends is acting a certain way out of fear, he is able to overcome his own fear.

This is a short story, but some of the best horror stories I’ve read have been at short lengths. This one has plenty of chills. So throw another log on the fire. Turn on all the lights. Pay no attention to the whispers you hear. They’re probably just the wind. Probably.