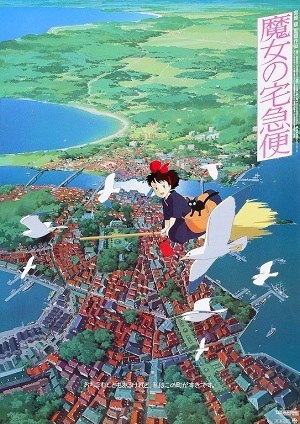 I don’t think there’s a single thing I dislike about Hayao Miyazaki’s 1989 film Kiki’s Delivery Service (Majo no Takkyubin in the original Japanese). I watched it for the first time when I was maybe eight years old; I distinctly remember turning the revolving rack at the public library and picking it, along with My Neighbor Totoro, from a host of other available titles. And when I watched it, well…there was a sarcastic talking black cat. I was sold.

Kiki is thirteen years old at the outset of our story, and she’s about to set off on her own to become a full-fledged witch. Accompanied by her talking cat, Jiji (voiced magnificently by Phil Hartman in the English dub), Kiki takes off on her mother’s broomstick to a town by the ocean. Once there, Kiki realizes that she doesn’t have any particular skill aside from flying, and she’s even hit-or-miss where that particular skill is concerned. Still, she is determined to make it on her own and prove that she is responsible enough to be her own witch.

Through beautiful happenstance that involves dodging the police and avoiding boys, Kiki finds herself working part-time for the heavily-pregnant Osono, who runs a small bakery with her husband. The bakery also serves as a base for Kiki’s new commercial endeavor: a broomstick delivery service. Amidst her many errands, she interacts with a host of characters, the majority of whom are women of vastly different personalities. These women serve as excellent role models for Kiki, displaying the various ways girls make their way in the world — whether that is as kindly grandmothers, jovial pregnant baker’s wives, or solitary forest-dwelling artists who get mistaken for boys. (This film not only passes the Bechdel test, but actively puts men in the minority; once Kiki gets to town, there are a total of two named male characters.)

I’ve always loved the fact that Miyazaki’s protagonists are so honest to reality. Kiki is no exception; she’s a hard-working adolescent with a goal, but when her duties deter her from having fun, she also can get really cranky. She doesn’t put on the veneer of finding joy in womanly self-sacrifice, and she is encouraged to take time to herself by her older female friends. She has old-fashioned values concerning interactions between boys and girls, but also just really wants to be friends with the amicable Tombo. She is flawed and she is lonely and she only changes her attitude when she realizes that it’s making her miserable. 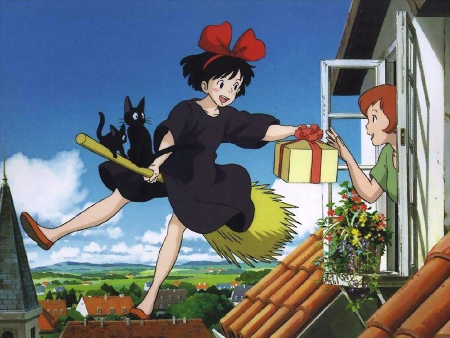 By the end of the film she obviously comes into her own, but it is Kiki’s struggle that has always given me hope. As much as I loved the magic and mystery of Kiki’s Delivery Service as a kid, I almost think I can appreciate it more now, as a twenty-something who is likewise trying to figure out where her place is in this world and how to achieve her goals. My personality is also very much like Kiki’s: I can get down on myself for my lack of abilities, I always try to do my best work, I’m easily frustrated when things don’t go as planned. And, also like Kiki, I have a lot to learn.

Kiki graces this post because she is a little witch with a little black cat — and what could be more in the spirit of Halloween than that? But her story is one that reaches beyond the confines of character type and takes a keen look at what it’s really like to be a young woman who is trying to learn independence. The witch is a perfect trope for this because she is the epitome of a woman who is held down by no man — ever independent, but also traditionally solitary. Kiki’s Delivery Service tries to strike a balance between that bitter view of womanhood with a healthier outlook of self-reliance and hard work. This is absolutely a film that I would encourage every child to watch — especially young girls — and to watch often. And it is a film that adults can also revisit time and again and see themselves reflected in the trials and tribulations of the most adorable little witch.