Over four decades, Pat Mills has been a key figure in the comics industry. From the giant shark Hookjaw in the notorious 1970s Comic Action (“The Sevenpenny Nightmare”) to 2000AD, Marshal Law and beyond, Pat has been a major force in keeping the British comics industry alive. I caught up with him to chat about the reappearance of one of his most enduringly popular characters, the Celtic barbarian, Sláine. 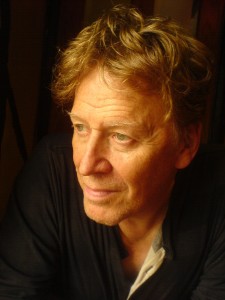 Alastair Savage for Amazing Stories: Sláine is back, with reprints of his 1980s adventures and a new weekly story in  Britain’s sci-fi comic 2000AD. What do you think is the enduring appeal of the character?

Pat Mills: He’s a Celtic hero.  Our distant ancestor – that strikes a strong chord in us.  And he was designed at the very beginning for a long run

ASM: How does it feel to be writing the character again after all these years? Do you feel your writing style has changed since Sláine’s first appearance?

PM:  Actually, I’ve been writing him continually during this time, so there isn’t really any breaks or significant changes of style.

ASM: You always credit your ex-wife, the artist Angela Kincaid, as co-creator of Sláine. How big a role does an artist have on creating a character like this?

PM:   Enormous. I gather these days that writers sometimes seem to be sole creators of stories and it’s then assigned to an artist who is therefore not the co-creator.  That’s fair enough if it’s a “man in a suit” who could be drawn by anybody. But otherwise, the artist’s visualisation of the world and hero is make or break. The wrong artist and the story is down the toilet.The fact that Sláine is around today is therefore also down to Angela. I’m not sure this is something everyone quite gets or values. To which I’d say, look at some other stories  – by myself or others – which didn’t last the course and you’ll see that often poor art is the reason.

ASM: As a story set from a legendary period in Earth’s past, Sláine draws on ancient Celtic myths and stories. How much research have you put into writing his adventures? Am I right in thinking that we actually have very few written records from the Celtic era, and what few accounts exist are mostly written by outsiders and invaders such as the Romans?

PM:  There are written records by the Celts and these were a primary source. E.G. The battle of Brian Boru against the Vikings.  The Tain. The Four Black Books of Wales.The Triads and so on.  We have to rid ourselves of our cultural slavery towards all things Roman. The Celts didn’t call them Romans, they called them Caesereans – Imperialists. The Imperialists need to be seen and condemned in those terms. Instead, teachers still venerate these fascists. That’s not coincidence, it’s calculated, cultural conditioning for the society we live in. The readers of 2000AD recognise this consciously or unconsciously and that’s another reason they like a rebel like Sláine.

ASM: The artwork in Sláine is just fantastic. Glenn Fabry in particular must be one of the finest artists ever to work in British comics. The story goes that he was working in a petrol station when he got the gig as Sláine artist. How did that happen?

PM: I had to find a new Sláine artist to meet the changing times and I mentioned this to Bryan Talbot who told me about Glenn working in a petrol station. He described Glenn as “The British Moebius”. Naturally I was after him like a shot!

ASM: Looking at the Tomb of Terror storyline again after all these years, I’m astonished at how complicated so many of the illustrations are. I’m thinking here of full-page images like the tomb of Grimnismal or the dark god himself. What kind of instructions do you give to your artist in situations like these?

PM:  Yeah, I love that tomb!  And the Dark God!  I would have given Glenn lots of descriptions and encouragement and probably tons of refs of “the kind of thing”.  After all, we were doing Lovecraft here.  But not just the “hinted” Lovecraft art where there’s an implication of insane architecture which the artist rarely depicts. Because it’s so bloody difficult. This is the real deal. This is Escher hell!  Glenn actually delivers. I think that single image is genius and possibly needs depicting as a poster, maybe minus the text. It’s a work of art. I dread to think how long it took Glenn!

ASM: The Time Killer collection includes the weekly choose-your-own adventure that accompanied the 1980s strips in the comic. In addition to this, you produced a special games magazine called Dice Man using characters from 2000AD as well as a new titular hero. Are there any plans to reprint any of those games? Could they be turned into apps or products for the Kindle Fire, as is the case with Fighting Fantasy gamebooks?

PM: Aha!  That’s a darn good point.  Thank you for drawing that to my attention. I shall copy and paste your question to the relevant guys at Rebellion. Definitely worth a thought in this digital age!

ASM: As the founding editor of 2000AD in 1977 and the writer of all the stories in the first issue, you played a huge role in changing British comics and raising their game. 2000AD in particular was the launch pad for the careers of many of the biggest names in the comics business,  but in the 1980s many of these creatives left Britain to work in the States, such as Alan Moore, Dave Gibbons, and Brian Bolland. Did you feel a sense of loss at that time as so many people moved their work overseas?

PM: There’s a sense now that this was inevitable. It wasn’t. It happened out of economic necessity. When it first started, I said to the publisher – we have to give Brian and Dave the money and the rights deal they want so they’ll stay. Give it to them. They’re worth it. The publisher said we couldn’t compete with the States. That is not an attitude I accept. It’s roll over and accept defeat. That’s not how I work.

It’s indicative of a general malaise in British publishing.  Example:  The top girls comic writers  – a husband and wife team – said to the managing editor they would go and work for Holland (Dutch Tina) if they didn’t get credits on their work. The managing editor let them go!!  He told me he “had to stand up to them. Otherwise it would set a dangerous precedent and other creatives would be wanting more and more.” That is INSANE! This corporate attitude (which is not dead btw) presupposes we’re in the army. It’s not like that. My view is simple – if a creative is a prima donna and they’re gonna sell a huge number of copies, give them what they want. I might swear about them, but it’s a talent business, so it’s just something we have to put up with. It’s not the army.  But if they’re crap and start  behaving like a super star (as sometimes happens!) I would take great pleasure in telling them to F.O.

ASM: Comics are incredibly cinematic and with modern CGI there are no limits to what we can show on screen, so does it surprise you that so far, Judge Dredd is the only 2000AD character to have appeared in a major movie? I would have thought that your dinosaurs vs. cowboys mash-up, Flesh, would be a prime ‘high concept’ storyline for a movie mogul to snap up.

PM:  I wonder if the reason is the British connection. Hollywood moguls often prefer comics with an American imprint.  Where Flesh is concerned, there’s that TV series about life in the Cretaceous. I’ve never seen it, but I gather it is quite squishy and has been cancelled. I don’t think they copied Flesh.

ASM: Finally, What does the future hold for you? What are your plans?

PM: Jeez!  So many things on the go. Right now – I’m working on a graphic novel with Hannah Berry for the Edinburgh Festival next year, in collaboration with other creators. And I’ve just drafted a proposal for a World War One series  that has something in common with Charley’s War but has a different spin and character line-up. Artist: David Hitchcock  (Madam Samurai).

ASM: Thanks for talking to Amazing Stories!