Fandomfest was missing the fest. 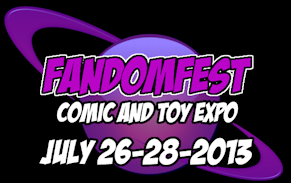 Just a few weeks ago, Louisville, KY was once again host to Fandomfest- a conglomeration convention that is part scifi, horror, comic book, anime etc. It did not go so well. Now, over a month later, the memory of that awful weekend still lingers. I had debated not doing any write up on the debacle of it all, but what the heck- folks considering going next year have a right to know the good, the bad and the ugly about Fandomfest 2013.

First off, let me point out that Louisville is ideally located for a scifi convention- right at the crossroads of Interstate 65 and 64. Louisville is just under two hours west of Cincinatti, Ohio, under two hours south of Indianapolis, IN, and I think under three hours east of St. Louis, MO. I can’t recall the driving time to Nashville, which is of course to the South. The point is, Louisville is smack dab in the center of a huge chunk of the Midwest.

Louisville now seems to host three major Scifi events each year- Wonderfest (a great model building/SFX show), the Derby City Comic Con (which is growing in leaps and bounds each year) and finally Fandomfest. That’s a lot of Scifi bang for your buck if you live in the region. So much, that I opted out of Wonderfest this year as my daughters are always bored to tears with all the incredible plastic models and sculptures that I spend a great deal of my time there admiring.

My first Fandomfest was in 2012- when Bruce Campbell came to town. My kids were super-excited. They know Mr. Campbell from his tamer movies- the ones I can fast forward past the naughty, inappropriate bits. Army of Darkness, Alien Apocalypse, My Name is Bruce and of course, the Adventures of Brisco County Jr. Great stuff.

For 2012, I decided to let the kids sleep in- I went over and stood in line with over a hundred other early-birders, reading a book as I waited for a chance to get my girls tickets to meet Mr. Campbell. Alas, you had to be present to buy a ticket- so I could only get one. As the show takes place in late July, near my youngest’s birthday, her big sister agreed to let the little one have the autograph.

We went and enjoyed the jam-packed sweatiness of it all, and thankfully got to skip to the head of the line to meet Mr. Campbell (all kids got moved to the front). My youngest was shy but still is excited about meeting Brisco a year later. His My Name is Bruce, autgraphed poster hangs proudly in the basement with all our other scifi & horror movie stuff.

For 2013, I was excited to represent Amazing Stories at Fandomfest- they requested someone attend. Not a problem- I was going anyways, as my eldest was dying to meet Stan Lee. After learning of all his work in the comic book industry over the years, and despite not being much of a comic book fan herself, my eldest is enamored with Mr. Lee and thinks he is the coolest. The only person she’d have been more excited to meet would be David Tenant or Matt Smith. Yes, Stan even eclipsed the mighty Bruce Campbell.

This year did not go so smoothly.

First, getting my press pass was a major pain in the rear. My plan was to use it to check out events (Han) Solo on Friday and Sunday, take the kids over Saturday and then do a three day write up and maybe even some live tweeting. I even recruited my cousin, a local podcaster and Con-goer extraordinaire to take photos for me so I could be busy with notes.

As Con time approached however, neither my cousin nor myself were contacted about our press passes. Later, it would turn out that his fellow local podcasters did get passes- but only two- and hadn’t broken it to my intrepid photographer. My follow up emails to the Con “organizers” (and I use that term very loosely) were going unanswered.

I gave up on a press pass two days before the event. I figured that I’d just take the girls and skip any article writing- because, clearly, the show wasn’t interested in any more press, what with their dozens and dozens of celebrity guests already generating enough hype to power a large city.

But, my cousin knew the organizer and never gives up. After many calls, texts and outright cornering him on the first day of the show, he got our press passes. I should have known this was not a good omen. I passed on Friday evening events and let my recruited cohort snap pics and wander around to take it all in.

Saturday, me and the kids loaded up and headed over, ready for the shoulder-to-shoulder throngs of sweaty fans and endless rows of vendor tables. We even had a small backpack with drinks and snacks at the ready.

When we arrived, we learned that the show had gotten so big, it was in two locations. The Convention Center, and the hotel it normally was hosted at. Both are connected by walkways. When we went to get our general admission tickets (I was still paying for the kids), we found the line had been moved to the convention center.

After a nice long walk where we got to see a lot of excellent cosplayers, we finally got to the jumbled mass of people milling around the convention center. Nary a Fandomfest crew member was to be scene. Nor were there any signs as to where we should go. We ambled around like the Walking Dead (who had several cast members there as well). Eventually, we found our way into a large hall filled with people in what I will call “lines” only because I can’t think of a better word.

We stood in our “line” for over an hour, waiting for a chance to get in line to buy general admission tickets. Being sold from three windows. That’s right, there were at least a thousand people in line, and they had three lanes open. Clearly, none of Fandomfest’s “organizers” had a retail background. They needed more cashiers.

Eventually, it was too much for my eight year old daughter, who was celebrating her birthday that weekend. She wanted to sit down. She wanted to go home. She wanted to stop looking at people’s backs and butts in a line that never ended. It was right out of Adventure Time– the one where Finn and Jake have to stand in line to see the boss of Hell.

Anyways, we had enough and stepped out of line. I took the kids home, stopping for ice cream on the way and wondering how many gallons of sweating I’d done. Once we were home, and my teenage daughter dropped into full I-didn’t-get-to-see-Stan-Lee pout mode, I got on the internet to check the status of Fandomfest.

Oh, man- Twitter and the Facebook were all worked up. There were some amazingly angry folks online. I can totally feel them. It’s one thing to drive for hours, stand in line with your kids and then be turned away, but to have actually already paid, then be turned away? That just smacks of lawsuit to me.

Now, the whole Fire Marshal story sure seemed like a tall tale when I first read it. I mean, Louisville’s International Convention Center is pretty darned big. Lots of events go on there and I’ve never heard of one being shut down before because there were too many people. My guess is that the lack of any organization, ropes, stanchions, etc was the problem. The curving, twisting, snake-like “lines” would have turned into a middle eastern riot if there had been an emergency. We could barely get out of line and leave- imagine if everyone had wanted to split at the same time.

I read a lot of stories about Fandomfest in the weeks since. The one that hit home the most was of a mom who drove her kids to the con, wearing their costumes, and then were turned away when the ticket lines shut down. She even posted before and after pics on Facebook- happy then sad little faces.

Conversely, Twitter and Facebook also had a lot of happy people- gushing on and on about how great it was to meet this celebrity and that. Of course, that does nothing for the vendors. I don’t recall a single huzzah about great stuff for sale. In fact, the few pictures I saw of the vendor areas seemed pretty empty. My intrepid photographer went back on Sunday and heard from many a vendor that sales were terrible- almost no one coming by. Probably because they were all in line to get autographs, or just to get in.

The problem, aside from the complete lack of organization, is that Fandomfest got too big for its britches. You don’t need thirty big name stars in a venue that can’t house them. Louisville is not San Diego. While it’s clear that Fandomfest could support a huge fan base, the site wasn’t large enough and there were far, far too few workers.

For 2014, I’ll be like so many other disgruntled Fandomfest goers- I’ll stay home. Wonderfest and the DerbyCity Comic Con are far better organized, and family friendly. I’m not dragging my kids out again with the goal of making them stand in line until they cry. Even if they mailed me tickets, I’d have to pass on this event- and that’s a darned shame. Fandomfest could have turned into a national event. Instead, it’s kind of a national joke, from what I read online.

The Language of Scandal: Why Do Speculative Fiction Writers Love Disgusting Scatological Insults?

Fannish Friday Not Being Held This Week

SPECIAL ANNOUNCEMENT(S): Amazing Stories publisher, Steve Davidson, will be participating on several panels at Boskone 51, taking place 2/14 – 2/16 at the Boston Westin Waterfront Hotel. (All pertinent information here.)  In addition to participating on panels with subjects devoted to Fandom and Fanzines, Steve will also be hosting a ‘special interest group’ meeting for […]

Are over-the-counter psychedelics in our future?