I used to play with My Little Ponies. I hated dolls, kept my hair short, wouldn’t wear dresses, but even I was susceptible to the unbearable cuteness of My Little Pony. For a while I kept a sizeable stable of them at the foot of my bed. 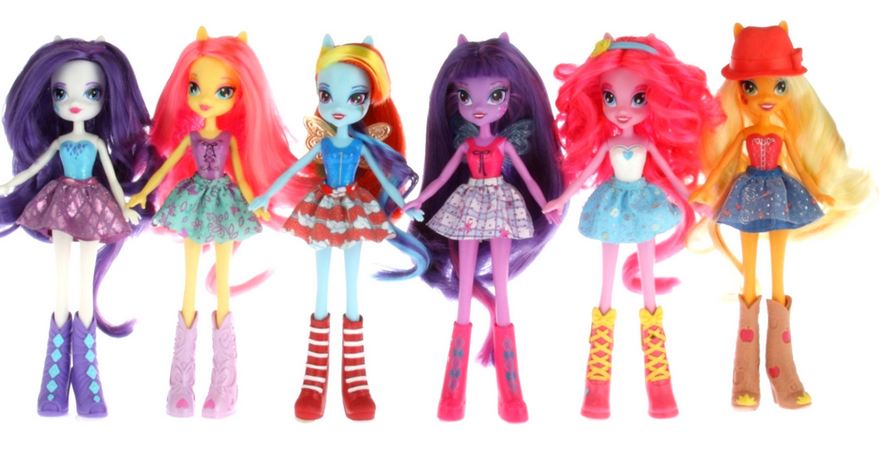 Imagine my shock when I found out that the newest My Little Ponies have breasts and thigh gaps.

This makeover goes beyond the desecration of my childhood memories. This is symbolic murder. Who killed My Little Pony?

In a horrid Medean twist, the murderer was the ponies’ creator, Hasbro Inc.

The premise of Hasbro’s new Equestria Girls movie is that the pony stars of the television show Friendship Is Magic have to travel to Earth to recover a MacGuffin stolen by the baddie. On Earth they are all high schoolers and the baddie, of course, is the school’s Mean Girl. I’m not going to recapitulate the utterly predictable plot here. It doesn’t matter what happens in the movie, or whether Friendship Is Magic suffers from it or not. As soon as the ponies turned into human girls, this franchise died.

The whole point of My Little Pony is that you, the child (or the adult), can pretend to keep ponies. It’s the molded plastic version of the Mercedes Lackey Heralds fantasy series. If the ponies morph into humans, who’s keeping who as a pet? It’s as if Peter Rabbit turned into a boy. Suddenly, breaking into Mr. McGregor’s garden isn’t brave and cute anymore, but behavior worthy of a restraining order.

Hasbro seems to have entirely missed the point of anthropomorphized animals. They are safe and appealing companions for children because the child remains in control of the relationship. Human > pony. The Equestria Girls pulverize this fantasy. They’re aspirational. They will confuse and alienate every child who likes to imagine herself romping with talking ponies, and the early buzz is that they’re putting adult fans off, too (read the comments). It’s astonishing that the most successful toy company in the world could have got it so wrong and I predict that the Equestria Girls movie will sink without a ripple and those loathsome tie-in dolls will vanish from shelves within weeks of their launch.

I think anime happened. The movie is drawn in an Americanized anime style. With their big eyes and swishy hair, the humanoid Equestria Girls are straight out of a low-rent Sailor Moon rip-off. Sitting here in Tokyo, I feel disloyal for saying this, but the artistic conventions of anime are horrifyingly sexist and objectifying, and now they’ve been imported wholesale into Western design studios. Yay? Boo hiss.

Anime fans are strangely loth to admit that their beloved genre has contributed to the sexualization of childhood. But guys, it has. Remember what cartoons and toys looked like before the Japanese invasion? Before the saucer eyes and infantilized facial features and missing mouths and pneumatic bosoms and pencil physiques? Toys for children weren’t always loaded down with fertility markers.

So now another player enters the mystery … thousands of them actually. Meet the Bronies! These are adult male (and female) fans of My Little Pony. They are not perverts or deviants. They just think that sparkly friendly ponies are awesome! They’re not too happy about Equestria Girls, either.

But what corporation is savvy enough to accept the simple notion that adults like ponies, too?

Your Honor, permit me to recreate the scene of the crime.

DESPERATE MARKETING MANAGER 1: We have a lot of adult male fans!

DESPERATE MARKETING MANAGER 2: We have to give them what they want! What do they want?

DESPERATE MARKETING MANAGER 1: Could we make the ponies sexier?

DESPERATE MARKETING MANAGER 2: Perhaps if we made them … girls? Sexy girls, like in that “Bratz” thing.

DESPERATE MARKETING MANAGER 1: Yes! Yes, that’s it! These “Bronies” will eat that up!

DESPERATE MARKETING MANAGER 2: But if they’re not ponies anymore, what shall we call them?

A 10-TON WEIGHT falls through the roof of the conference room and squashes them all flat.

So that’s how I think it happened. Hasbro Inc. killed My Little Pony. Their motive: a shallow bandwagon mentality … and the inability to believe that their own product’s message of love and tolerance could really appeal to adult fans, especially male fans.

I also find anime guilty on a charge of accessory to murder. By bringing teh sexy to the realm of cartoons, it started an arms race of kawaii!! in the toy industry. In this environment, the Hasbro marketing department must have convinced themselves very easily that their cute ponies weren’t cute enough.

In today’s toy industry, cute means kawaii!! (2) And I can’t be the only ex-My Little Pony fan who thinks that’s a damn shame.

1. There is nothing wrong with enjoying anime. I’m only criticizing the way its stylistic conventions have colonized children’s products.

2. Interestingly, most Japanese toys are not kawaii. They tend to be lovably grotesque or just silly (think Pokemon).