Back in March, the studio Animation Do released a trailer for a nameless anime about a group of hunky male swimmers.  The trailer caught fire on the internet, with folks all over begging for an anime to follow.  In July of this year that anime, based on the light novel High Speed! by Koji Oji, was released: Free! Iwatobi Swim Club. 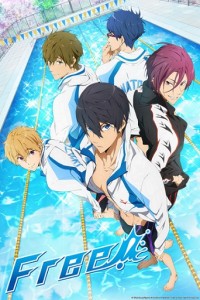 The series is currently simulcasting through websites like crunchyroll.com, and while it may seem premature to review an anime when it’s only on its fifth episode (out of a projected twelve), there are many things worth noting about it.  To start out, there is absolutely no question in my mind that this anime is fan service.  There are half-naked teenage men with swimmers’ bodies in every single episode, complete with slow-motion pans and sparkly water effects.  The relationships between the characters allow for a variety of potential homosexual romantic pairings which will probably never come to fruition in the show but are left entirely to the fans’ imaginations.  If that’s not fan service fodder, I don’t know what is.

But the whole thing isn’t just pointless cheesecake, believe it or not.  There is a plot, and each character has their own distinct personality that furthers that plot along.  And unlike so much fan service geared toward young women, the female characters (though they are few) are not annoying, meddling, vindictive, completely nonexistent, or excessively problematic.  What a concept!

The protagonist is Haruka who, along with his companions who also have girlish names (Makoto, Nagisa, and Rei) team up to form a swim club at their high school in order to compete against an old friend with a likewise girlish name, Rin.  Haru, Mako, Nagisa, and Rin had all been on a swim team together in middle school, but when they were making the transition into high school, Rin opted to study in Australia with the dream of becoming an Olympic swimmer.  Rin’s polar opposite, Haru just wants to swim for himself, because he feels a deep connection with the water; Haru is insistent that he will only swim freestyle.

I never considered that I would watch and enjoy a sports-centric anime.  And though this one obviously involves a certain amount of pandering, there is actually a good deal of swimming and training that goes on, reminding you that visuals can only get you so far if your story is lacking.  The animation is pretty stunning, though; not a single clip from the original teaser trailer is reused in the episodes released thus far.  It’s obvious that the animators have been studying not only what a swimmer’s sculpted body should look like, but also what the actual act of swimming looks like – both from inside and outside the water.

The show’s main female character, Gou (Rin’s little sister with the boyish name!), is actually quite wonderful.  It would be so easy to make a character that is hopelessly drooling over the main boys all the time and trying to get them to date her.  Gou-chan does do a fair amount of drooling, but not enough that it distracts her from her responsibilities as the captain of the Iwatobi High School swim club!  She comes up with training regiments, organizes trips, and keeps the boys on track.  And beyond that, she has a genuinely likeable personality; so often, female fans of a male-centric anime will gang up on female characters, calling them annoying or accusing them of getting in the way of their homoerotic fantasies.  I seriously think it would be hard to cast Gou in that kind of negative light, and sad as this sounds, that’s a real accomplishment for this kind of anime.

The character designs and personalities are interesting, as well; even though the boys’ bodies look more or less in-shape and similarly muscular, every character has his identifying features – be it face shape, hair color, or in one case…pointy teeth!  And each boy has his own goal: Haru wants to swim as much as humanly possible; Makoto wants to make sure that Haru is happy and swimming; Nagisa wants to be reunited with his own friends; Rei wants to be a beautiful swimmer; and Rin wants to beat Haru in a race fair and square while Haru is at his peak swimming condition.  Even Gou has a goal – to reintroduce her brother Rin to his old friends and remind him that swimming is fun and that he doesn’t need to be so competitive and pigheaded about it.  The motivations are not only clear, but the viewer is roped into hoping that each character will achieve his or her goal.  Twelve episodes isn’t a lot, but hopefully it will be enough to deliver the goods in that department, since we already know that it will be visually very pleasurable. 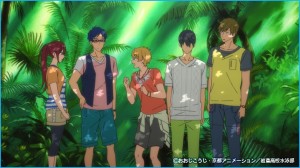 I do think that Free! is an anime worth watching, regardless of your gender or romantic preference.  The fan service is fun to chuckle at, and the story is actually engaging.  I know that I’m waiting with clenched fists for the next installment (episode five left off on a HUGE cliff hanger that had me shouting at my computer screen).  With the summer wrapping up, Free! is a good close to the beach season, and a great beginning for the fall sport season.

The next episode airs on August 14th.