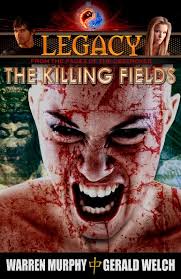 The Destroyer spinoff series Legacy is back with another great book, The Killing Fields, in what is turning out to be a fantastic series.

If you aren’t familiar with the Destroyer, it goes something like this: In the 1960s, the US Government started a secret agency, CURE, to work outside the Constitution to battle threats to America. To serve as its enforcement arm, CURE chose a beat cop named Remo Williams, had him framed for murder, faked his execution and then turned him over to the House of Sinanju.

And that’s where the science fiction/fantasy fun begins. Sinanju is the sun source of all the martial arts- a House of assassins going back thousands of years, working all around the world and perfecting their art, and their bodies, to superhuman levels.

Oh, and there was a really lame movie made about the series in the 80s. (Remo Williams: The Adventure Begins) 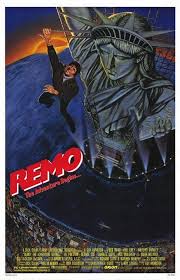 For the 21st Century, the Destroyer family has expanded. Remo Williams, like James Bond, has sown some wild oats during the course of his decades of thrilling adventures. So his kids, Freya Williams (daughter of a Viking Valkyrie warrior princess) and his son, Stone (a Navy SEAL) now find themselves living on an Indian reservation, being trained by Remo’s natural father, Sunny Joe Roam.

Yes, it gets soap opera-like here. Turns out an ancient Sinanju Master left the tiny West Korean village and journeyed to America, long ago. He was adopted into a tribe and became its Chief and Protector- passing down the secrets of Sinanju to his son and so on.

As Remo and his adopted father Chiun, the 102nd Master of Sinanju, continue to kick butt around the world, Stone and Freya find themselves hired by an offshoot of CURE to protect America’s borders.

Very long-winded, I know, but it’s a clever way to relaunch the series to a new generation, without actually relaunching it. You get the same feel as the old series, but with new characters and all new adventures. And, hopefully, guest appearances by Remo and Chiun when they aren’t in their own books.

I’ve previously reviewed Legacy #1, Forgotten Son. It was pure awesomesauce. Right now it should be in development to be a movie, series of movies or AMC’s eventual replacement for The Walking Dead (they’ve been walking for what, four seasons now? When are they going to get there?!)

Legacy #2 takes up right where we left off. Freya is a 16 year old Wunderkind, and the first female ever trained in the art of Sinanju. She’s a total bad ass- and a sixteen year old girl with insecurities, impetuousness, etc. etc. Stone, her big brother, has spent a lifetime becoming Rambo 2000. He smokes cancer sticks and eats delicious steaks while scoring bull’s-eyes with his offhand and one eye closed. He’s not really ready to abandon decades of American military training and experience to go around karate-chopping bad guys. It makes for a good conflict. Stone is the wiser, more street-wise super commando. Freya is the terminator-like waif with the heart (and hair) of gold.

In The Killing Fields, the dynamic duo face off against a super assassin made with the latest technology. A great premise, especially given that Stone and Freya are protectors, not assassins. This new assassin,  named “14” works  for  a shadowy ogranization known as VIGIL that we met in Book 1, Forgotten Son. And she has her  sights set on Freya and Stone.

The book is well written, flowing so very fast from page to page. Like classic Warren Murphy and Richard Sapir tomes, it is wonderfully descriptive, wasting no words and putting you right there.

Okay, Fanboy mode off. I will admit, I can only give The Killing Fields four stars. That’s not to say it isn’t a great book. It is. It’s more of the same of stuff from Forgotten Son, book 1- which is great and a teensy bit dissapointing. There’s not a whole lot extra, here. When I read the first book in the series, I was excited with the newness of it  and wholeheartedly gave it five thumbs up. And while an excellent book on its  own,  The Killing Fields just needs a little something extra for such a perfect score as a sequel.

For one, the witty humor of Warren Murphy seems to be lacking. In The Destroyer, Remo Williams is a complete smart ass, and his Master, Chiun, is a straight man who clearly studied Abbott and Costello before coming to America. The series drips with humor.

Legacy is all seriousness. Freya is serious and teenagery. Big brother Stone is serious and Big Brotherly. Their supervisor/CURE liaison is all former-MOSSADerly and serious. Nobody laughs. Nobody tells jokes, except their grandpa, Sunny Joe Roam, and he’s barely in the book.

C’mon! Splitting heads open and tormenting bad guys should be fun. I want to laugh when I read a Sinanju title.

Then there’s the action. It reminds me of watching the Incredible Hulk when I was growing up. Bill Bixby was awesome, but I wanted to see a green-painted Lou Ferrigno tearing stuff up. Which amounted to like seven minutes of screen time. Half of which was him looking sleepy as he turned back into the Magician. Legacy is the same- great action, but in conservative amounts that left  me wanting more. I expect it is hard to write prolonged action sequences worthy of John Woo- this is a series about superhumans who can bend steel with their hands and dodge bullets, asfter all. But I think that just means the authors need to step up the villains’ threat levels. I don’t want the end of Act 2 to be over quickly- I want the heroes to fight for it and get their butts handed to them. And I want the Grand Finale in Act 3 to last at least half a chapter and leave behind a trail of carnage worthy of a Godzilla movie.

Does this mean The Killing Fields isn’t good? Not hardly! It just means I have to deuct thumb, or at least a knuckle from Book 1’s five thumbs up. Legacy: The Killing Fields is a fantastic book- even if I did I read it in five hours (my fault for reading so darned fast). But now I have to wait months for the next one. Netflix has put me in the habit of gorging on whole seasons of TV shows in one sitting. I’ve become jaded and impatient. I want more Legacy and I want it NOW.

If you’re a Destroyer fan, you totally need to read the Legacy Series. If you aren’t, well read it anyways- it’s a good way to see if you’d like The Destroyer (which numbers over 150 books now). In either case, rest assured that Gerald Welch and Warren Murphy once again deliver some great reading for a reasonable price, and which may actually be appropriate for my teenage daughter, as I don’t recall any of the boobage and James Bondian manwhorishness Remo Williams so often engaged in. It’s Sinanju for a new, younger generation.

Four Thumbs and a knuckle up.