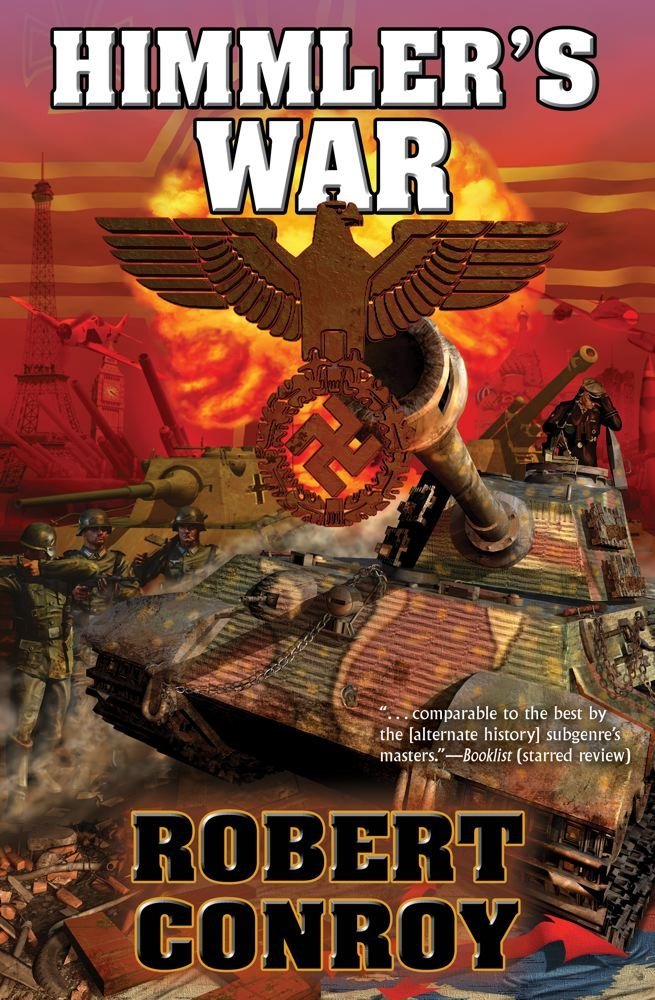 Writing alternate history (and period fiction) is a tricky task. There is always the temptation to bend details for the sake of a good story – and then there will be some humourless reader who will then write long posts on why it couldn’t happen the way you suggested. I tend to judge the book on both its merits as a piece of alternate history and the writer’s skill in telling a story. A world where Hitler successfully invaded Britain might be implausible, but that doesn’t mean that someone can’t write a good story set in such a world.

Himmler’s War takes a look at what the world might have looked like if someone more rational than Hitler had been in control of Germany during the crucial years of 1944. A bombing run by an American bomber kills Hitler just after D-Day begins. Calling Himmler more rational than Hitler is rather tricky – but at least Himmler has the sense to actually listen to his generals. A few pages into the book and the story hangs together rather well. Conroy does a reasonable job with a vast cast of characters, showing their reactions to the war – and how they might react when confronted with different possibilities. One weakness shows itself clearly, here – many of his characters are very similar to his other characters from earlier books.

One character who does stand out is Harry Truman, who asserts himself in a manner that is quite historical. The situation in the US that makes it necessary, however, is a little harder to follow. FDR was certainly weaker than the American public knew at the time, but he wasn’t senile.

Unfortunately, I find it difficult to follow the logic behind the course the war follows. Himmler would probably allow the German generals to run the war the way they wanted to run it – and yes, this would certainly cause huge problems for the Allies. It is quite likely that an increase in German production earlier than historically would make it more likely that the Germans would bleed the allies badly. However, there is little logic in the Soviets accepting a truce with Germany – let alone shipping hundreds of tanks to the Nazis. Stalin might well have accepted a truce with the Germans – a period of six months for the Red Army to catch its breath would have been very helpful – but I can’t see him helping the Germans. The Red Army needed the supplies it was getting from the West and deliberately betraying the Allies would have been disastrous.

The problems get worse as the story continues. Historically, the German nuclear program was unable to produce a bomb. The idea that they can jump to building a working device – and then slipping it to Moscow to blow up Stalin – is implausible, to say the least. Conroy hand-waves desperately here, assuming that we won’t notice. At the end of the story, it seems that the West has managed to take all of Germany – with the Poles still under Russian domination. Quite why the Russians fell apart so quickly is beyond me. A case could be made that Moscow falling in 1942 would have crippled the USSR, but the situation was different in 1944.

There’s also the issue of international politics. It is true that both Britain and France had reservations about fighting to the bitter end. However, it is unlikely that either of them would have resorted to considering deals with Himmler. The French Communists might have risen against the Free French on Moscow’s command, but frankly I’m not convinced that that would have won them any friends.

Assuming that the POD works, what is likely to happen? The chances are that the Germans would certainly manage to stall the Allies for much longer, but their ability to take the offensive would be very limited. Why? The Allies (mainly the USAAF, but the RAF as well) had overwhelming air superiority. They could (and did) hammer the Germans from the air, despite German jet fighters that were (in theory) superior to anything the Allies had. (The Germans might have done better if they’d diverted resources to more propeller aircraft than jet fighters.) However, the war would have ended only a few months after OTL.

Why? Unlike the German program, the American nuclear program produced a working nuclear bomb. If Germany had held out a few months longer, the US would have started dropping atomic bombs on Germany. I assume that the German generals would have been smart enough to overthrow Himmler’s regime and surrender to the West. That would have opened up a whole new can of worms – a fitting place for a story.

The plotline of this story is familiar. It is very like Fox on the Line and Fox at the Front, which – IMHO – explored the possibilities far better. Overall, Himmler’s War is worth one read, if you can put your doubts aside. But it doesn’t deserve more than that. The author’s 1901 was a much better read.