Angst is a modern condition that few of us can escape. How many people, I wonder, wake up each day and ask themselves: “How did I get into this situation?  How can I fix my life? What can I do to straighten out my life?”

Philip K Dick had other questions: “Am I mad? Why do my visions become real? Are my visions communications from inter-dimensional beings?”

Some thought Dick mad. At times, Dick was wracked by doubts because he had visions that permeated his life. They are now well known. Individually, these visions might have discredited him with casual acquaintances, but his close friends, seeing them on the whole, view them differently. Some of those visions were truly remarkable.

One incident in particular instigated an entire year of visions. It began one day when a woman, with Christian symbol of a fish about her neck, knocked on his door. Reflected pink light, from the symbol, blinded him briefly. Dick remarked later it burst:

It triggered visions throughout the following year. One of those visions saved his son’s life. He envisioned the cause of his son’s ailment, insisting to his wife:

“He has a hernia, a birth defect… it’s killing him.”

Dick and his wife rushed the child to an emergency and, in fact, Dick’s belief was confirmed by medical staff. It saved his son’s life. It was not the only vision that he had. Other visions came true. Associates insist that Dick’s visions often gave him unique insights into the truth.

Dick was regarded as more than a remarkable visionary; by those who followed his career, he was regarded as a prophet. Since his death, Dick’s fame has only grown stronger and many regard him as the greatest Science Fiction Writer in the last fifty years. But was he mad? Were his visions drug-inspired?

When I believe, I am crazy. When I don’t believe,
I suffer psychotic depression.

On November 17, 1971, someone broke into his house and used explosives on his 1100 lb safe. Police accused him of doing it himself. Friends explain that the safe may have had a white powder…heroin…within. They even have suspicions about who may have done this. There is an anecdote about Dick contemplating whether or not he had blown the safe himself … but just didn’t know it. Friends play this down as a joke. Well…they think it’s a joke.

Many of his works of fiction became true. What he envisioned somehow manifested into reality. So what about these visions about being watched by the government? Or did this paranoia push him over the edge and drive him into schizophrenia?

Michio Kaku, a theoretical physicist at NYC University, would ask you: If electrons can jump from one state of existence to another, and can exist in multiple realities, or drift across parallel realities, what’s to stop a human being from doing the same? The implication is that Dick’s experiences can’t be discounted, but may be within the realm of possibility. I like to think that Dick is the first human to claim citizenship in the multiverse. 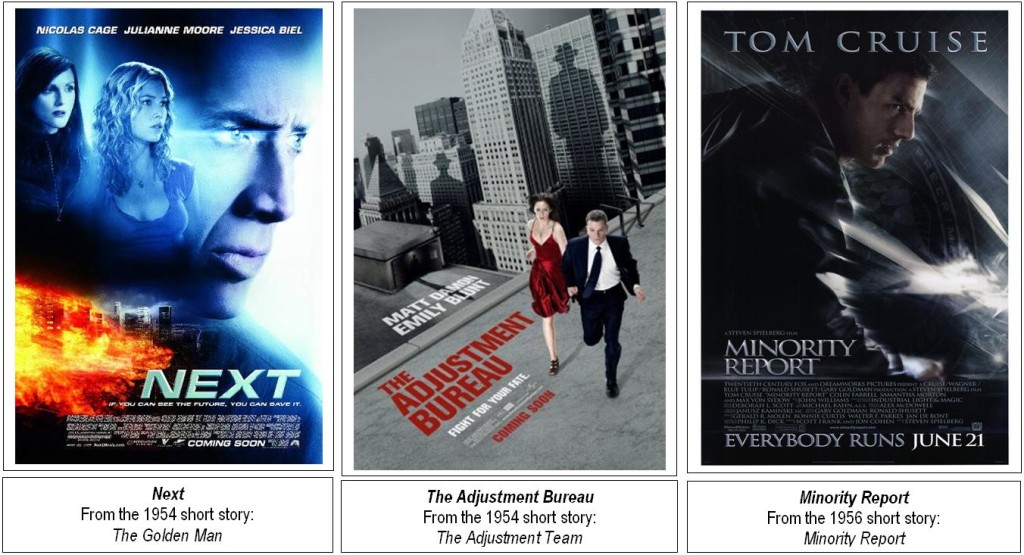 Dick wrote 44 novels and 120 short stories; an impressive number of his works were made into feature films.

Dick’s influence is all over the following lists of films and filmmakers:

This is just the short list. When you start surveying modern SF films, you’ll quickly come to believe that Dick may have single-handedly revolutionized filmmaking. You can find his influence everywhere, within movies like James Cameron’s Avatar. It’s possible that screenwriters, following in the Dick tradition, don’t know of his work. They may simply be riding the rising tide of his remarkable influence.

There may be plans afoot to adapt The Man in the High Castle and Flow My Tears, The Policeman Said to film. A better bet may be Ubik, directed by Michel Gondry (–remember Eternal Sunshine of the Spotless Mind?)

If you’ve only seen Dick’s movies, let me offer you a run down on a couple of his written works.

A Maze of Death: On Delmak-O, colonists live along side both real and artificial beings. But colonists are being killed off under mysterious circumstances. During one violent episode, a colonist, Seth Morley, escapes from would be captors and discovers that Delmak-O is, in fact, Earth. When he rejoins the other colonists and reveals this, they come to suspect they have been incarcerated as criminally insane victims in a psychological experiment for their own rehabilitation. An accident causes their world to collapse around them. They awaken, finding their dead have rejoined them. Trapped on a spaceship, they rationalize that they’ve been trapped in a virtual reality. Morley, depressed about all this, considers letting the air out of the ship to escape this false reality. Before he can act, one of the artificial beings removes him from the ship and the hallucinatory cycle begins all over for the others, but without Morley.

The Man in the High Castle: This 1963, Hugo Award winning novel is an alternate history of World War II. The Japanese and Germans have won and taken over the United States, dividing it in two, each victor managing a different half. Germany is the senior partner in this effort. FDR is assassinated and a weak president loses the war. A critical plot device within the work is the novel within the novel: The Grasshopper Lies Heavy. It is an alternate history of this world where an entirely different set of circumstances leads to the defeat of Germany. As a result, the Germans, in Dick’s Alternate History, have banned the book in America. Several themes in the novel revolve around the question of truth, not only about “our” reality, but the reality of the characters and their reacting to another “possible” reality. An antique dealer wrestles with personal perceptions as he peddles counterfeit Americana to his Japanese customers. All in all, the novel is richly sprinkled with a hallway of mirror images of possible realities.

Ursula K. LeGuin, who happened to be in Dick’s 1947 Berkeley High School graduating class, admits to Dick’s influence on her. Dick was married five times and his third wife wrote a memoir about him: The Search For Philip K. Dick by Anne R Dick. Some claim that the definitive biography of Dick is by Divine Invasions: A Life of Philip K. Dick by Lawrence Sutin (1989). Eric Carl Link studies recurrent themes of Dick in his Understanding Philip K. Dick, though it’s anybody’s guess if you can make sense out of what was going on in Dick’s mind.

Toward the end of his life, Dick wrote frenetically in his journal creating what he called The Exegesis. It is a lengthy diatribe, rambling notes explaining Dick’s metaphysical conceptions on religion and human perception. Some assert it contains the secrets of the universe. Perhaps its mere hyperbole, but I suspect it depends upon either your intuition or your imagination … or both.

If anyone is so inclined, they can mosey over to the Special Collections Library at California State University, Fullerton and peruse the Philip K. Dick Science Fiction Collection. His original manuscripts are housed in the Pollack Library there.

Some of you may not have heard that at one point, fans created an android head of Philip K. Dick. It appeared at a San Diego Comic Con as a panel member, discussing the film adaptation of A Scanner Darkly. It was “misplaced” by an American West Airlines employee and has never been found. Many fans, no doubt, spent some time asking: “Hey! Does anyone know where Philip K. Dick’s head is?”

That question is, perhaps, one that Philip K. Dick may have often asked of himself.

Welcome internet traveler. I will be stockpiling neatly organized bits into a collective known as a blog along this portion of your journey. Do not fear for your personal safety, as I will take great care to observe the rules of hospitality during your visit.  As I am a certifiable Tech Geek, I will spend […]

Happy Hanukah from the ISS

Visiting a Ship from My STAR CRUISE #SciFi Romance Novels