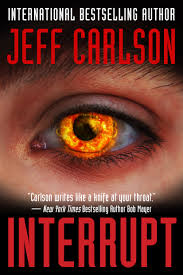 Let’s get one thing out of the way up front. I am crazy about Jeff Carlson’s writing. I even tipped him as my favorite lesser-known SF author in a recent interview here on Amazing Stories. Tying that hangman’s noose a bit tighter, I stated at the time that I thought Carlson’s best work was still ahead of him.

Well, I still hope it is.

Because his new novel, Interrupt, was very disappointing.

The reader in me would have thrown Interrupt across the room when I finished it, had it not been inside my Kindle at the time. (This is a major drawback of the e-book era! The pleasures of throwing, shredding, binning, and burning[1] books are now a thing of the past. DELETE FROM DEVICE just does not satisfy in the same way.)

But it’s just as well I didn’t get to throw Interrupt away, because the writer in me needed to interrogate Carlson’s failure to find out how it happened. And I believe that once we get past that negative reader’s reaction, I’ve got a constructive thing or two to say about Interrupt. This might even end up being (ghastly phrase!) a teachable moment.

In the distant past, the leader of a Neanderthal tribe confronts the end of his kind.

Today, a computational biologist, a Navy pilot, and an autistic boy are drawn together by the ancient mystery that gave rise to Homo sapiens.

Planes are falling from the sky. Global communications have ceased. America stands on the brink of war with China—but war is the least of humankind’s concerns. As solar storms destroy Earth’s electronics and plunge the world into another Ice Age, our civilization finds itself overrun by a powerful new species of man…

That’s the blurb. Sounds good, right? If you want to go read the book for yourself, click here right now because there are spoilers ahead.

Still with us? OK, the first half of the book is given to the process of working out, mostly by protagonist Emily, a computational geneticist, that the EMPs from the solar storms are turning regular human beings into “primitives” and autistic / Asperger’s people into Neanderthals. Yes, actual Neanderthals. Who turn out to have no individual personalities. Their tribes are like group minds whose thought processes can be summed up as “Grok run. Grok hunt. Grok kill.”

The second half of the book is Emily and the other survivors being chased, swarmed, attacked, and outnumbered by the Neanderthals, until they finally use their human intelligence and a hefty stroke of luck to defeat them.

Does this remind you of something?

Well, it reminded me of … pretty much every post-apocalyptic survival story published since World War Z.

So what has happened here is that Carlson has had this incredibly cool idea, and he’s spent about 150 pages walking us through it in detail, only to end up with the zombie apocalypse.

The lesson here is that you can call a zombie a Neanderthal, but if it hunts like a zombie, overruns civilization like a zombie, and infects formerly sympathetic characters like a zombie, it is a zombie, and no amount of smeerpage(2) can make it feel fresh. Especially since these zombies are Neanderthals, which means that they don’t have the most thrilling zombie traits, such as eating people. These are weak-sauce zombies. It’s so depressing.

So that’s one thing that’s wrong with Interrupt. I have the utmost empathy for Carlson on this, honestly. I’ve done the same kind of thing myself in the past. You’re so enamored with your own cool ideas and shed-loads of research that you think readers will be, too. But cool ideas do not necessarily generate exciting dramatic situations. Stories need movement and development beyond the characters’ threading of the intellectual maze lovingly created for them by their author.

Emily’s arc starts off promisingly, with angst over her impending marriage and a nicely conflicted relationship with her sister, but then the sister vanishes from the book and when Emily finds her fiance’s corpse, she’s over him in two pages–never mentioned again. She spends more page time worrying about whether it would be for the best to turn everyone into Neanderthals, because the Neanderthals seem to be happier than the human survivors.

This brings us to the other problem with Interrupt, which unfortunately involves one of Carlson’s greatest strengths as a writer. I actually suspect him of being a stealth Christian, but that’s neither here nor there, except that it inspired me with the title for this post.  “Love thine enemy” is a major theme in all Carlson’s work, going back to the Plague trilogy. He’s got a thing for big abandoned gestures of love that look, to the suits and officers and sometimes the readers, actively suicidal. Think about what Ruth does with the vaccine in the end of Plague Zone. A stronger parallel to Emily’s musings about turning everyone Neanderthal is the attitude of pity and admiration, almost love, that protagonist Alexis adopts towards the sunfish (aliens) in Carlson’s novel The Frozen Sky.

In fact, I was about three-quarters of the way through Interrupt when I thought to myself, “I’m reading The Frozen Sky all over again, with Neanderthals instead of aliens.” It really is exactly the same story: strong woman protagonist, a scientist or engineer, confronts an inhuman enemy race in a life-and-death struggle, and falls in love with them. This is, let’s be quite clear, a fantastically entertaining story, with an emphasis on courage, love, and emotional imagination that’s often missing in genre fiction. It’s the fact that Carlson has now written it two or three times with different furniture that I don’t like.

And what’s worse, the danger presented by the EMPs in Interrupt–our heroes can’t go outside while the solar flares are active–bears a strong resemblance to the nanoplague situation in the Plague trilogy, which confined our heroes to mountain-tops.

Come on, Jeff, man. Please. Don’t cannibalize your own stuff. You’re better than this. Stop. Retrench. Branch out. We love you.

I feel almost too sick about this to wring a writerly lesson out of it, but for the sake of completeness, here it is:

You can change up the worldbuilding all you like, but it’s the dramatic situations that make a story. And the more often you repeat them, the more likely you are to provoke blog posts like this one.

1. I was eight. The book went into the grate and slowly turned into a briquette. I wouldn’t have been able to get to sleep that night otherwise. And no, I will not reveal what book it was.

2. Smeerpage: I just now coined this word to describe the thing that writers do when they lay on sciencey exposition in the attempt to convince readers that their rabbits are really smeerps.