Home Fiction Is the Hulk Catholic?

This is a post for the writers. And for readers who enjoy a bit of a rant.

Pictured above: the League of Catholic Superheroes! (Click on the pic to see a larger version.)

Yes, someone actually took the time to do this. And I am properly grateful.

I mean, I knew Daredevil was Catholic. But the Hulk?!

Why, yes! According to the Vatican daily L’Osservatore Romano, “Bruce Banner, the incredible green man, in fact married his beloved Betty Ross in a church and a Catholic priest presided at the ceremony.”

Now if they were Japanese, this would be no proof at all. Loads of couples here get married at Catholic churches by Catholic priests despite not knowing the Holy Trinity from the Seven Deadly Sins. But there’s more:

“There are other indications dispersed among the hundreds of comic strips dedicated to him that are said to unequivocally reveal his faith,” L’Osservatore Romano said.

If a character’s kneeling with a rosary in their hands, it’s pretty obvious that they either are Catholic or soon will be, heh heh. But sometimes we get no textual indication whether a character is a Catholic, or a Christian at all, or an agnostic, or “I’m-not-religious-I’m-spiritual,” or a worshiper in the Church of the Flying Spaghetti Monster. (Dear atheist friends, this means you. Affectionately.)

Well-written characters always have some beliefs about religion and God or the non-existence thereof, inasmuch as they’re human and we all do. If it’s not relevant to the story, it needn’t come up, but the author ought to know about it. Sometimes I suspect the author just hasn’t thought about it; characters written by this sort of writer usually share their creator’s dullness and lack of curiosity about the world. It’s not necessary to put your characters through a U.S. Census-like battery of questions–and please, please stay away from those dire D&D-esque character sheets! — but you should know how your main characters would answer the questions “Do you believe in God?” and “What do you believe happens to us after we die?” Their answers may trigger insights that enrich your story thematically and even in terms of plot.

What really irks me is protagonists who answer these questions in their internal monologues with some variant of “I dunno. I guess I hope there’s no God or I’m gonna be in trouble for slaughtering several dozen people in 300 pages. Snerf, snerf. But I really dunno. I’m certainly not gonna express any beliefs that might offend any segment of my author’s target readership.”

For some reason urban fantasy is especially culpable in this regard.

These dodges are just so silly. In a world where magic works, or Loki is running a casino in Nevada, or werewolves and vampires stalk the corridors of every other friggin’ high school in America … there will, I submit, be a lot fewer agnostics. But the weaselly attitude summarized above isn’t even agnosticism in the honorable tradition of Albert Einstein. It’s just writers being scared to offend anyone.

Speculative fiction is so careful these days. We’re all walking on tiptoe, straining to be inclusive, terrified that our lack of authenticity might be exposed. But each of us has beliefs of his or her own that are real and authentic. Why on earth do we feel like we have to hide them? Whence this weird compulsion to avoid the topic of faith altogether?

It probably goes back to the outdated notion that religion is a taboo subject. “Just don’t mention politics or religion and you’ll be fine.” People have been saying that to me, too, for most of my life. But come on! Have these people glanced at the news recently? It’s politics and religion wall to wall, 24/7. Where CNN, MSNBC, and Fox can blithely tread, surely speculative fiction writers can follow, and maybe contribute some sincerity to the discussion.

The times they have a-changed, and Marvel Comics proves how much. Once upon a time there was a thing called the Comics Code. It  discouraged comics writers from so much as mentioning religion by the use of vague but heavy-handed stipulations, e.g. “In general recognizable… religious institutions… will be portrayed in a positive light. These include… known religious organizations [and] ethnic advancement agencies.” (And who’s going to say what is positive enough? Who arbites these things? Anyone who takes offense, that’s who!) This from the 1989!! edition. As Douglas Rushkoff points out, comics had their genesis in an era when “America was supposed to be a melting pot. That was our cultural metaphor. Religion and ethnicity were supposed to be subordinate to our role as Americans.” But now? Fast-forward to 2013. The new Superman film is overtly marketed to American Christians as a Biblical allegory, and major news outlets carry the story that the Hulk is, in fact, Catholic.

So maybe it’s time for writers of speculative fiction, too, to stop worrying whom we might offend, and wade into the discussion–with sincerity, humility, and respect for others in our hearts. 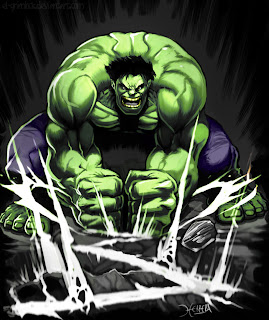 Writing about religion is hard. But writing stories in which characters are religious is simply honest.

Whatever your personal beliefs, they give you a platform to explore the whole wide, wild world of exotic and interesting people who disagree with you … and fiction gives us a peerless set of tools to understand them with. I do have one bit of advice for writers grappling with the challenge of incorporating religion into their stories, cos it is a challenge, one I’m still wrestling with myself. This trick has been invaluable to me; I think I pinched it from Evelyn Waugh but I can’t now find the reference. It is this: Give your own beliefs to the least likable character in the story. And if you can bear it, give your protagonist beliefs that are several twists of the kaleidoscope away from your own.

1. What is it about writing this blog that makes me quote Nine Inch Nails all the time?