Last week we looked at some of the structural and aesthetic devices used by mainstream espionage fiction, and saw how the genre actually makes use of many tried-and-true staples of speculative fiction. So how does the relationship work in reverse? How do science fiction and fantasy incorporate the devices and techniques of espionage fiction?

An Uncoiled Spring: The Absence of Real-world Tensions

As we discussed last week, espionage fiction explicitly builds on contemporary real-world apprehensions amongst its (generally) middle-class readership. When readers are worried about a German invasion, spy fiction gives them comfort. When they fear the Bolshevik Menace, they can sleep soundly because daring spies are on the job. And when nuclear Armageddon is at the gate, there are brave (if tortured) souls ready to secretly prevent mutually-assured destruction.

We come to mainstream espionage fiction cognizant of the real-world tensions that genre explores. It is much harder for speculative fiction (particularly secondary-world fantasy and far-future science fiction) to derive its narrative tension from the real-world geopolitical concerns of its readership. This difficulty arises from one of the very tools that both speculative fiction and espionage rely on: world-building and its resultant estrangement.

Whether it is the technological novum, the careful application of neologism, or the verisimilitude of an alien/imaginary world, speculative fiction has relied upon and refined the same techniques of estrangement used by espionage fiction. But while the two genres may utilize the same tools, they rely upon them to different degrees.

When we sit down to read the (largely fantastical) work of Robert Ludlum, for example, the narrative remains rooted in our recognizably real world, with its related and relateable problems. The narrative suggests to us that we exist in the same reality as Jason Bourne, and so the narrative encourages us to bring our real-world apprehensions into the fictional environment.

The same cannot be said for Iain M. Banks Culture novels, or for Robin Hobb’s Farseer books. While both stories feature spies and assassins, their fantastical settings explicitly separate the narrative’s environment from our own. In this one sense, the cognitive distance between their far future or secondary-world fantasy setting and our own reality gives rise to a forced escape: Where mainstream espionage novels encourage us to bring our real-world tensions into the narrative, speculative fiction explicitly encourages us to leave them at the door.

My statement above may be seen by some to be somewhat controversial. After all, speculative fiction has a long tradition of exploring the same ethical and political conundrums as espionage fiction. The difference, I think, lies in the context given to those conundrums. In espionage fiction, real-world concerns are given only the thinnest of fictional veneers; the narrative plot is explicitly unified with its underlying themes, in a way that is often not the case in speculative fiction.

Consider for a moment the plot and themes of John Le Carré’s Tinker Tailor Soldier Spy. In terms of plot, we have an espionage bureaucrat called out of a quasi-forced retirement to hunt down a traitorous double-agent highly placed in the British intelligence apparatus. The underlying themes of justification, betrayal, personal and patriotic loyalty, etc. can all easily be spotted in such a cursory summary of the novel’s plot.

Contrast that with a summary of Iain M. Banks’ The Player of Games, where a Culture board game player is recruited by the Culture’s intelligence service to travel to an alien empire and defeat that empire’s greatest game players in a board game intrinsically tied to that empire’s politics and social systems. While the novel’s themes of patriotism, loyalty, and the multifaceted expression of cultural values are closely tied to the plot, the relevance of those themes to our daily existence is less clear.

And that, I think, is the difference between how speculative fiction explores themes through espionage and how espionage fiction does the same: In espionage fiction, the narrative’s underlying themes are superficially represented in the narrative’s plot while at the same time being easily related to our real world experience. In speculative fiction, while the underlying themes may get representation in the narrative’s plot, it is harder to overlay those themes onto our real world because their relationship to our world is more oblique. 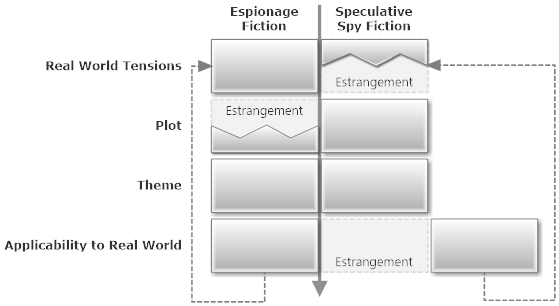 Coming Up Next Week…

So how do espionage tropes (spies, double agents, assassins, assassination, etc.) actually get used in speculative fiction? What do writers like Banks, Hobb, Martin, Carriger, and others actually do with them? Given this week’s brief and admittedly theoretical background, next week we’ll take a closer look at the details and explore specific examples of how espionage in speculative fiction is actually used.