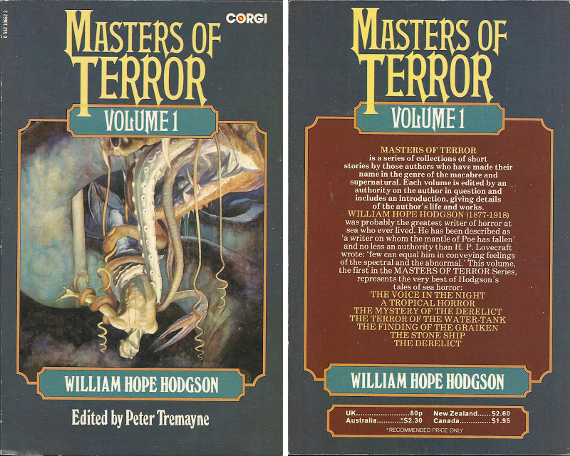 William Hope Hodgson has, from the very beginning, been one of my favourite writers of the weird. When you read through this slim, quasi “best of” collection you’ll see how much influence he had on H. P. Lovecraft. It’s not fair to Mr. Hodgson, but many of his short stories could easily be described as “proto-Lovecraftian”.

Mr. Hodgson was not only an excellent writer of short horror stories; he was also a very successful novelist.  His most famous novels of horror and the fantastic were “The House on the Borderland”, “TheBoats of the “Glen Carrig”” and “The Night Land”. He also penned a series of stories about the supernatural investigator “Carnacki the Ghost Finder”. All of these stories and novels are in the public domain and are available on-line to read. They are also all still in print and available at Amazon! So do yourself a huge favour and look up some of these stories and novels. They are fun, readable and have held up amazingly well when you realize that this was all written before 1914!

Mr. Hodgson sadly died at a fairly young age when he found himself at the receiving end of a German Artillery shell in France during WWI. So we will never know how many more novels and stories he had in him still.

Mr. Hodgson didn’t bother with mundane or traditional horrors such as Ghosts, Demons or other such supernatural horrors that are so common in Edwardian horror stories. Nope, Mr. Hodgson’s horrors are tentacled, slimy and squamous. Just the way Mr. Lovecraft liked ’em! The horrors in these stories may be unnatural, but never supernatural. They are all physical, if not terrifying and disgusting, tenants in our world. If Mr. Hodgson is famous for anything it would be more or less single handedly inventing the popular concept of the “Sargasso Sea”. That huge continent sized mass of sea weed floating out in the middle of the Atlantic Ocean,  a huge seething mass that has trapped sailing ships throughout all of history. That it also happens to be the home of numberless shapeless and slimy horrors that defy description just makes it that much more enjoyable.

Every story, except one, in this collection deals with these maritime horrors. If you find a copy heed my advice and space them out. They are all wonderful tales, but the plotting and setting lend them a sameness that blends them all together if you attempt to read them all, like I did, in one sitting.

Mr. Hodgson spent many years at sea when he was very young. And it’s this maritime experience that lends a strong sense of authenticity to his stories set at sea. I think he did take a few liberties though when describing the ship’s crewmen. In these stories they all come across as good, decent and brave men.  From what I’ve read of his own life, it seems that this is not actually the case as far as Mr. Hodgson’s experiences went.

I’m not going to go into to describing these stories this time. They have to be read to be believed. And lucky for you, they are all available online!

The collection opens up with Mr. Hodgson’s most famous story, “A Voice in the Night”. This is one of the first horror stories I ever read. I can vividly remember taking home a copy of “More Tales to Tremble By” from the library at “Johnny Clem Elementary School” back around 1970. The story, although bloodless, scared me out of a year’s growth and managed to give me a lif long fear/hatred of moldy things. I reread it last week and even though I’m 51 years old now, it still managed to be deliciously creepy! You’ll have to trust me on this. The story is so good that it was even filmed in Japan as “Matango, Fungus of Terror” aka “Attack of the Mushroom People”. You can find a few clips of this film on “Youtube”.

Here’s a typical passage describing one of Hodgson’s horrors….

“But he never finished, for a tremendous hoarse scream cut off his words. They hove themselves round and looked. I could see without turning. The man who had run from us was standing in the waist of the ship, about a fathom from the starboard bulwarks. He was swaying from side to side, and screaming, in a dreadful fashion. He appeared to be trying to lift his feet, and the light from his swaying lantern showed an almost incredible sight. All about him the mold was in active movement. His feet had sunk out of sight. The stuff appeared to be lapping at his legs and abruptly his bare flesh showed. The hideous stuff had rent his trouser-leg away as if it were paper. He gave out a simply sickening scream, and, with a vast effort, wrenched one leg free. It was partly destroyed. The next instant he pitched face downward, and the stuff heaped itself upon him, as if it were actually alive, with a dreadful, severe life. It was simply infernal. The man had gone from sight. Where he had fallen was now a writhing, elongated mound, in constant and horrible increase, as the mold appeared to move towards it in strange ripples from all sides.“

Now, did that wet your appetite? If it did, then search out these stories online or at your bookstore or library. I can honestly say that these are some of the finest stories of this sort that the genre has ever seen. And they are of course, of special interest to any serious fan of H.P. Lovecraft.