Home Fiction The Universe is Bigger than You Think, Writers

I must admit that I have a huge pet peeve when it comes to science fiction. Don’t get me wrong- I love this modern era where SF is all up in the mainstream. But what really irks me, more even than the bad science from writers who’s educational background I have to question, is the issue of scale.

One of the most copied visual effects of recent years is the Star Trek VI exploding moon of Praxis. They even went back and added that version of a bursting planet to the deathstar in one of the many “enhanced” versions of Star Wars: A New Hope. What a nice, pretty, hula-hoop-like circle expanding outwards. At impossible speeds. 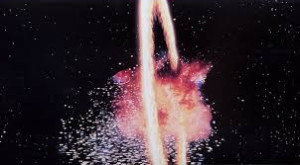 If a planet is 12,500 miles in diameter, and it bursts apart, the chunks moving whole planetary-widths in under a second, it implies to me they are are accelerating to a speed of 45,000,000 miles per hour, or more (12,500 x 60 x 60), or 1/14 the speed of light. Frankly, I’m skeptical that ANYTHING could survive such an acceleration. There couldn’t even be chunks.

Take the Star Trek reboot. Vulcan implodes in a matter of seconds. Utterly ridiculous. The force needed to do that would have sucked surrounding star systems in as well. 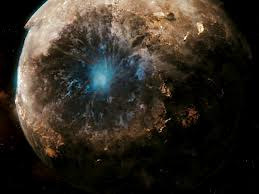 But beyond the whole planets-bursting-too-fast issue, there’s travel times. I know it would be incredibly boring to watch people travel in real time- heck most movies don’t last long enough for starships to get where they’re going. But when we fast forward, lets keep those travel times in mind.

It took the space shuttle about 8 minutes to reach orbit during that program. In Star Trek, Bones and Kirk have a delightful conversation as they jet into orbit from Iowa. It takes them about 2 minutes. I’ll give you that inertial dampeners might have kept them from being turned to jelly on that crazy ride, but what about atmospheric effects? The shuttle moved at about 18,000 mph. To do that same trip in one-quarter the time? Well, you’d be going four times as fast. I’d think the noise pollution from such a transit would really irritate a lot of the 24th Century homesteaders.

And don’t get me started on Star Trek 5 and how quickly they’re able to reach the center of our galaxy (which is 50,000 light years in diameter)… 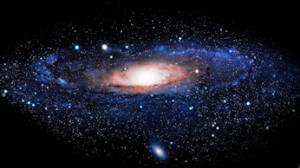 It’s not just Star Trek though. I particularly disliked in Iron Man 3 when it took the pieces of Iron Man’s armor less than ten minutes to get from Tennessee to Florida. Sure, they’d need to be moving fast as they couldn’t possibly have that much fuel in them. But again, wouldn’t they at least be going faster than the speed of sound? Where exactly over America did they emit a sonic boom? I mean, 700+ miles in less than ten minutes? They’d have been moving well over 4000 mph.

Okay, so travel times and planetary sizes are all jacked up in SF, all for the sake of moving the story along. What else is off about scale?

There’s communication times. How often do we see in a space opera folks talking in real time with ships or star systems lightyears away? When NASA put men on the moon, the delay in their transmissions was 2 seconds. That’s just our moon. It’s not very far away at all. Subspace communications? Might as well say they’re using magic wands. 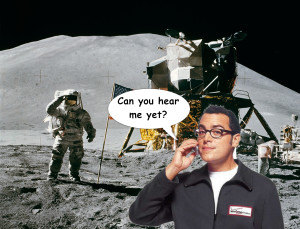 And here’s a real pickle for you. Tonight, when the sun sets, look up at the stars. Aren’t they pretty? Who knows- we can’t see them. We’re actually seeing light from the past. Even our closest neighbor is something like four light years away. It took four years for that light to get here. For all we know, it could have been swallowed by a black hole yesterday.

That makes faster-than-light travel a bit confusing. Everything is in motion- our galaxy spins around it’s own central axis. So if I wanted to travel to a planet a hundred lightyears away, I’d need to take into account that it has moved since then. Maybe not by much, but the further a destination is, the more it will have moved from where we see it now.

None of this will probably ever find it’s way into a movie or novel though. It’s far easier to shrink the universe down to make it fit a story. That’s sad, because it reinforces the idea that our planet is getting smaller everyday, when in fact it, and our universe, our far, far larger than we can truly comprehend.