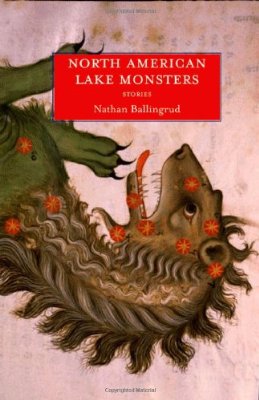 What do you say to a man who’s fresh out of jail, whose wife has been sleeping around and who doesn’t know his daughter anymore?

What do you say to a kid living alone with his disabled mother, who finds the companionship he craves in a white supremacist group?

What do you say to a homeless man, a post-Katrina refugee from New Orleans who’s lost his home and is now losing his mind?

These are the awkward footnotes to the American myth, the bodies trapped at the bottom of this big old North American lake of ours. Cos yes, it is full of monsters. And they devour people.

We, the lucky ones, live in a world of surfaces narrated for us by the slick storytellers of pop culture. When we look down, we recoil, if we see anything at all. But Nathan Ballingrud has lived down deep and seen everything. The stories he wants us to know are the messy ones, the tales of horror that don’t wrap up in three acts and a dramatic reversal. I dare you to read this book.

So let’s talk about vampires!

And wounded angels and cannibals and werewolves and zombies.

North American Lake Monsters has them all. But they aren’t what you think they are. Ballingrud’s most traditional take on a monster, “Sunbleached,” is also the story among those collected here that hews most closely to the accepted idea of “a story.” It has a straightforward plot, a gut-wrenching conclusion, and yes, a dramatic reversal. It’s no coincidence that “Sunbleached” is also the one it’s hardest to take seriously. You finish reading it, shiver, and pass on. It’s good. It’s a story.

The other monsters here are scarcely recognizable, although you will recognize them, and that’s part of the fun. Here’s Ballingrud’s take on Nessie or something like her, washed up dead on the shore, in the title story:

It looked like a huge, suppurated heart. It seemed a confusion of forms, as though the weight of the atmosphere crushed it out of true: he had the strong impression that underwater it would unfurl into something sensible, although perhaps no less strange. Its skin, glistening with dew and sickly excretions, was dark green, almost black. Enfolded in the flesh near the mud was an eye: saucer-sized, clouded, eclipsed by a nictitating membrane which covered it like a bone-white crescent moon. A two-foot-long gash was partially buried in the mud; it could have been a mouth, or the wound that killed it. An odor seeped from it like a gas, candy-sweet.

Transformation. Ballingrud’s language transforms known quantities into monsters again. No meta winks and nudges at the reader here, no Hollywood-proofed wisecracking. These stories feel reported. (The exception is The Crevasse, written with Dale Bailey, a great story that belongs in a different collection.) The monsters feel as real as the sad, struggling, and quietly desperate Americans who experience them.

Transformation. Each of these stories wreaks a transformation upon its protagonist. I use the passive voice purposely. If there is a weakness to Ballingrud’s handling of human drama, it’s that his characters can seem a touch passive, the proverbial victims of their circumstances. But I think that’s the point. They are victims of their circumstances. Welcome to Planet Earth. And although Ballingrud’s characters don’t find their own transformative moments, but are found by them, they have autonomy and they choose transformation–spiritual, mental, or physical. Even if, as in “You Go Where It Takes You,” that choice amounts to: anything would be better than this.

“You Go Where It Takes You,” the opening story of the collection, sets the tone and, with its shocking ending, frames the moral of North American Lake Monsters. Transformation carries a shocking cost.

Two recent, disastrous transformations of the American landscape reverberate through the book: Katrina and the financial crisis. New Orleans is felt as a lost love. So is the American Dream, which seems now to have vanished for good along with Bear Stearns’s collateralized debt obligations. The transformations of Ballingrud’s characters echo these cataclysms. And yet–despite all the blame that’s flying around the landscape, and in the teeth of our contemporary hysteria about anything resembling reckless behavior–he refuses to judge them. These people do some really terrible things. They suffer. But there’s no sense of comeuppance earned, much less deserved.

This is the most striking quality of this extraordinary collection: the compassion of Ballingrud’s gaze. He makes no excuses for his characters, never comes near to glorifying their bad choices, and yet never looks down on them. The reader is left with the scarcely bearable knowledge that in the end, the subjects of North American Lake Monsters are human.

North American Lake Monsters is available now from Small Beer Press, the extremely worthy publishing house run by Gavin Grant and Kelly Link. Buy it from Amazon or Barnes & Noble. Or, of course, a bookstore.

Full disclosure: I have known Nathan Ballingrud since we attended Clarion together. It was a vintage year! But I’d still rave about North American Lake Monsters even if I didn’t know him from Adam.

Our Ansible is Missing – Intellectual Property Theft in Science Fiction

A trip down memory lane – with art catalogs!