There’s a movement to boycott the upcoming movie Ender’s Game based on a popular and award-winning Orson Scott Card novel of the same name. 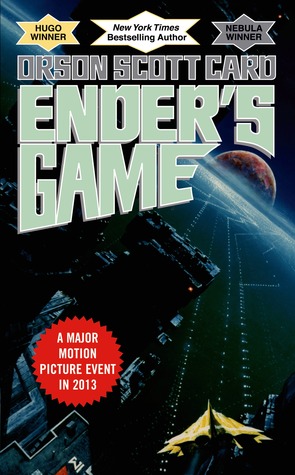 The basis of the boycott is that Card is a Mormon who advocates against gay marriage and other groups because of his religious beliefs and puts his money where his mouth is.  I agree that Card does these things, and I’m not a fan of his personal beliefs by any means.  I think his views kind of suck, and as an atheist (one of those other groups), I take some of them personally.

I don’t think there’s anything anti-homosexual about Ender’s Game, or a lot of Card’s work more generally, although some have criticized the novel in ways I admit are compelling (really interesting essay worth reading, so check it out).  Subtext is subtext, however, and subject to personal interpretation.

Card has called for tolerance here.  He’s being a bit of a hypocrite, of course.  I think we should give it to him, even if he isn’t so tolerant himself and is as unworthy of special consideration as any dogmatic fundamentalist.

Still, why shouldn’t everyone jump on the boycott bandwagon?

Here are my reasons.

1. A major motion picture is not the work of one person.  It’s thousands of people whose livelihood depends on the success of a movie with millions of dollars invested.  The movie is going to help or hurt many more people than Card personally.

2. The story is not anti-gay.  There’s a non-sequitur here.

3. If this turns out to be a great movie, I punish myself a lot more than I punish Card.  There’s a long history of great art by sucky people (and almost everyone from different times/cultures holds some offensive views).  I’m sure I can find something you love by someone craptacular.  Do you want to start rationalizing it away now, or wait until it’s pointed out to you?

4. Card himself says in his call for tolerance that he’s lost.  I agree with that assessment, maybe not for exactly his reasons, but history is against him.  A boycott of this movie doesn’t have any effect on gay rights, which are coming along faster and faster.  I’m pretty happy about that.

6. I’m having a real problem with people picking individuals and following them around and boycotting their work and livelihood.  I’d like to think I could write whatever novels, stories, and even essays as I wished, and if they didn’t like them people would not try to keep me from conducting my research and teaching in astronomy.  Litmus tests over narrow issues will always find targets.  People are complex, with a mix of good and bad, but a litmus test will find that they’re “good” or “evil” and that’s kind of shitty.  I’m sure Card thinks he’s good and doing the right thing, and he has a loving family that he also loves.  No one is all bad.

7.  I’m seeing more and more often, with less and less provocation, individuals and groups trying to start boycotts of people for the slightest things.  Don’t get me wrong — Card’s bigotry is not so slight, and if anyone not a criminal is worth the effort he is — but it’s a bad trend.  In some spaces, the slightest disagreement immediately becomes a call for boycotts or firings.  That’s just messed up.  Would Ghandi or King pull this shit?  Maybe, but not so often.  I’m really seeing it way too much.  While I think it’s okay to be somewhat intolerant of the intolerant, let’s err on the side of tolerance.

8.  Turn the other cheek.  People are watching.  This is really not about changing Card’s mind, but bullying him.  The key to changing our culture that still permits tens of millions of people to hold Card’s views is not bullying, but exposure and engagement.  Boycotts sometimes just invigorate enemies.

9.  There are still tens of millions who share Card’s opinion in the USA, more around the world.  Should people target one particular person?  How is that fair, to be so arbitrary about it?  Yeah, he made a target of himself by being a successful loudmouth.  So what?  Which leads to my final point…

10. Is the time and effort to lead and spread news about a boycott the best use of that time and effort?  Are there pro-LGBT charities or causes that could be promoted, to greater advantage, than a boycott of a movie without anti-gay content that happens to be based on a book by a fundie Mormon?  Why not urge people to donate to a pro-gay charity — whether they see the movie or not?

Personally, I’ll wait to see the reviews.  If it gets good reviews, I’ll see it, like any other movie.  If not, I’ll wait to see it for free on cable or elsewhere, if it’s convenient.  There’s a lot of science fiction movies I don’t see just because they’re reported to be mediocre.  I think that’s a good reason to wait.  Not because the author of the book they’re based on is loud-mouthed enough to have succeeded in making his bigoted political views known.  There’s a crapload of artists like that.

An Interview with Hugh Howey

In this week’s viewing: Higurashi and (spoiler) talk about parallel worlds, Re:ZERO indulges in some counterfactuality, and more!

On Monday Skyfall was released on Blu-ray and DVD in the UK. Tomorrow Cloud Atlas will open in UK cinemas. Two films, poles apart. Skyfall, the 23th entry in probably the world’s longest running and most successful film franchise. An undemanding, commercially safe example of formula film-making and an enormous box-office hit. Cloud Atlas a […]

The Clubhouse; Sometimes the Chair needs a chair.

Inspired by Nature but as Tough as Iron: Metal Foams