Remember that really creepy painting done by Francisco Goya, Saturn Devouring his Son? Well, someone in Japan thought that would be an interesting motif for an Anime series / Manga, and they were damn right.

Attack on Titan was created by Hajime Isayama back in 2009 and made into an anime this year. The story takes place in a dystopian future where large beings known as titans have pushed humanity to the brink of extinction. In response, the remaining human settlement had created a few giant walls to keep them out. And they worked pretty well for about a hundred years, until a titan the size of a skyscraper mysteriously showed up.

The premise may sound a bit ridiculous, but it actually works — considering the titans are not your typical biological creatures: no reproductive organs and no chemical energy required for them to keep going and going and going … . But if you ask me, I’d like to think they eat us because we taste like bacon: delicious, screaming bacon … mmmmm. 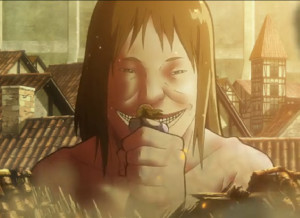 I love its art style; there is a real Guilty Gear X vibe to the character design and action sequences. My only gripe with the show is the pacing. It’s nowhere near Dragon Ball Z bad, but it definitely gets hung up on conversations that wouldn’t ever take place in these types of situations. I’m sorry, but when you’re staring down a 30 foot tall, naked man with that “I haven’t eaten since breakfast” glimmer in his eyes, I don’t think you’re going to stand around reminiscing on the not so good old days.

With that said, I’m hooked. There is a constant tension that really gets to you. And when it breaks, all hell goes with it. There is no sugarcoating or sidestepping the horror and bleakness of their lives, here! You can head over to http://www.crunchyroll.com/attack-on-titan to watch all the man-eating carnage with new episodes being released on Saturdays.

Alternate History tales – the view from the Vatican!

Wings of the Archangel, a new novel by Ariana D. Aldaz López, explores the mother-daughter relationship

NEWS SPECIAL from Frederik Pohl’s The Way the Future Blogs

Nebula Awards by the Numbers