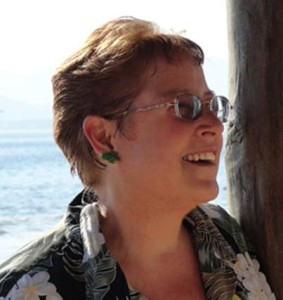 Julie Rodríguez Jones is an independent artist both physically and stylistically. Julie’s space art usually falls into the impressionistic category (colloquially we call ourselves “swirlies” in the IAAA) —though not always and she will often incorporate her space art into her other styles of art especially liturgical art which is the mainstay of her business, Art from the Soul. Jon Ramer, the current IAAA president, summed up in a recent article, the type of art that Julie creates as being “about inspiring people, making them think and feel, raising their emotions, and creating a sense of awe in them.” For well over a decade, Julie’s art has turned to space to express that sense of awe we experience when viewing images from the heavens.

Julie’s life prior to Art from the Soul, was at the Lawrence Berkeley National Laboratory where she worked for thirty-three years and wrote collaborative research and development contracts between the Lab and other scientific institutions world-wide. She left Berkeley Lab in 2003 to create her art full time. Prior to pursuing her own art career she also studied traditional art at the Berkeley School of the Arts with Arngunnur Ýr, Lien Truong and Gwyneth Welch.
Being associated with the IAAA has brought and education in space art and even in Julie’s more fanciful pieces, she depicts phenomenon based on aspects of actual science or what has been visually observed—on which the IAAA prides itself.

Julie grew up at the beginning of the space era with her mother pointing out Sputnik in the night sky along with major constellations. Later her father took her to telescope making sessions at the Contra Costa Astronomical Society where she ground a mirror and hand made an 8” Newtonian reflecting telescope. (She and her dad carried the pipe fittings for the mount home on the bus!) She followed the space program from its inception. Julie always had an interest in art but it wasn’t until after college and mid-career that she was able to truly pursue her interest. And it was a drawing of her son’s in middle school that first spurred her interest in space art. Julie discovered digital media while working at Lawrence Berkeley National Lab and her art is now almost exclusively digital.

Julie’s space art includes everything from mail art for Yuri’s Night to traditional framed pieces to book covers to liturgical art. You can find elements of space art in much of her non-space art work. Julie has had her art published in and on books and magazines, has created art for businesses and churches world-wide. She has received numerous awards and honors. Here are some examples of her work:

Mail Art: Mail art isn’t necessarily a piece of mail, though it can be an actual postcard, illustrated letter, original painted stamp or similar item, but could be an object, or anything else accepted for shipment by the postal system and subsequently shared or exhibited.  These pieces, along with several others, were exhibited at Yuri’s Night 2008 at NASA/Ames at Moffett Field, California and at Yuri’s Night in Montreal, Canada.

“Supernova Remnant” (24” x 48”), was originally created as a traditional piece of art (in purples and blues!) and was transformed into a kitchen backsplash with the help of Joy Day of the IAAA and her company, Spherical Magic, who embedded the art into tiles. The art was digitally transformed to match the colors of the kitchen.

The above piece, “Accretion Disc 2,” (36” x 96”) had a shape based on IAAA member, Dirk Tirrell’s, disc formation and evolution animated graphic. The color and interior shapes are purely imaginary.

Solar Song:My son said this piece reminded him of music, thus the title which I thought was appropriate for the warmth we receive.  This view of the crescent earth was inspired by the Rosetta’s spacecraft images but this particular Earth is my own creation.

A clergy stole based on Julie’s “Nova” piece of art (left) and one of pure fancy (right).

A Christmas banner based on Comet Neat.

One of “The Shawls of Easter” banners.

Julie also creates liturgical art, large format banners up to five feet in width for churches, and cotton clergy stoles. This is by far the largest portion of their business. After she creates the art she also prints her own fabric and then has a small core group of sewers who sew and complete the stoles. Julie’s son, Ross, assists her and she says he is the best critic. (Ross is also an artist in his own right.)

Julie invites you to come and explore. “Open your eyes. Look up to the skies and see.” – Queen

This past February I had the great pleasure of speaking with Mr. Murray Tinkelman, the famous and award winning illustrator. This came about by my wanting to do something different for once in the blog. Mr. Tinkelman has been one of my favourite cover artists since the middle 1970s when he illustrated the front and […]

I’ve been a bit stuck for a topic, so I punched “space rabbit” into DeviantArt’s search field. This is the result: Enjoy!