Only two this week, both representing Hugo Award winning efforts in the field of fanzine publication, one hailing from the pre-internet era, the other a product of that era, and both invaluable resources for both Amazing Stories and fans in general. 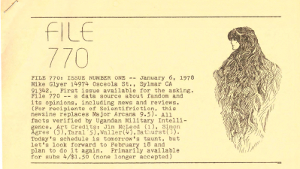 Mike’s File 770 has been a mainstay of fannish news coverage since 1978. File 770 began as a mimeographed (look it up) publication and continues as an electronic (PDF) publication as well as a daily updated website.

Mike provides straight coverage of fannish news, from cons to awards, feuds,  an inside look at well-known personalities and the occasional touch of fannish humor.

Mike Glyer and File 770 have been nominated for Hugo Awards (for Best Fan Writer  and Best Fanzine respectively) a total of 45 times – THE most times anyone or anything has been nominated.  File 770 has won the Best Fanzine Hugo six times and MIke Glyer has won the Best Fan Writer Hugo Award three times.  Mike was also the recipient of a special committee award presented at the 1982 Worldcon for Keeping the Fan in Fanzine Publishing.

You can visit the website and read full issues on eFanzines.com

SF Signal is the first purely online fanzine to win the Hugo Award for Best Fanzine.

SF Signal was conceived, developed and published entirely during the internet age and represents the first truly successful merger of internet, electronic publishing and fanzines.

Rockets and Missiles: Past and Future

I am totally biased and opinionated when it comes to art. It has to connect with me in some emotional way.

How could a trip to Mexico in Richard Feynman’s van possible go wrong? (Bonus: Science Lessons!)