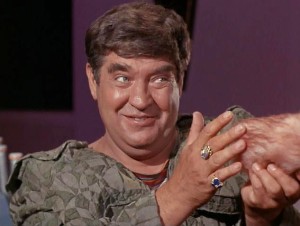 I’ll start this week’s thought-provoking commentary with a statement: I like Star Trek. Mostly. I’m no Trekkie/Trekker, but I greatly enjoyed TOS and TNG. DS9 had a few good moments. I refused to watch Voyager, and I thought Enterprise was well made but it lost my viewership after about six episodes. I love the JJ Abrams reboot movies. Well, the first one- I still haven’t gotten to see Into Darkness.

Now, all that aside, let me begin…

I was cruising the old Facebook this week on my PADD, er, tablet, and I saw one of those Trek Memes, with Picard on the bridge, talking. The caption was something about how in the 24th Century they no longer focused on the acquisition of wealth, but in improving the quality of life for all.

First off, that sounds akin to Communism. I know Trek has many times claimed that money didn’t exist in the enlightened 23rd-and-a-half-Century, but I can distinctly remember episodes and characters where merchants exist. Take Harry Mudd- no seriously, take him. Far away. Why didn’t they send him to the Borg – problem solved.

But let’s look deeper for a moment. Perhaps Captain Jean-Luc “I’m-a-talker-not-a-fighter” Picard was right. For argument’s sake, let’s examine the Federation as a moneyless empire. That would be communism. All the collective workers would be striving on equal footing, unable to acquire wealth, but rather to working like bees to better everyone around them. The janitors cleaning up puke from the holodecks at daycares around the Federation would be receiving the same benefits as the scientist sitting on the bridge scanning for lifeforms on some new planet.

In a galaxy like that, people would probably be judged based on their aptitude. You’d probably take a test that would determine if you were going to be a redshirt, or the people sending condolence emails to the redshirts’ family members. Not everyone could be a starship captain – or even hope to rise to that level from hard work.

A society like that would soon crumble. Without hope of a better, personal tomorrow, many folks would be apathetic. They wouldn’t work hard. They wouldn’t do the best maintenance job they could on the transporter buffers, for example. There would be a Federation of slackers who knew that as long as they punched the clock and went through the motions, they’d still go home to their Federation-specified sleeping quarters.

I seriously doubt Gene Roddenberry had such a “Utopian” Pinkos-in-space vision of the future in mind.

Fret not though- I can prove that Star Trek’s Federation is not communist. There is incentive for workers, and people can still acquire wealth.

First off, take a look at the San Francisco skyline in any Star Trek movie. All the buildings are not the same. Some are taller. Some are newer. Why is that? Why aren’t all the buildings the same? Why would some buildings be nicer than others? Taller? With better views?

Okay, I can see where Captain Kirk might rate a posh penthouse view as reward for his years of service. But remember in Star Trek 4, Save the Whales, when McCoy came to visit him? His walls were adorned with pricey antiques. Sure, he might have inherited them, but I’d wager he bought them. But with what? And how did Bones bring him antique glasses and Romulan ale? How would a geriatric, penniless Doctor pay for those commodities?

Yes, the Federation may have done away with paper money and even coins, but clearly there would be room for a barter system. Take that Holodeck janitor I mentioned earlier. Say that he doesn’t work very hard, and therefore doesn’t wear his boots out in the time the Federation’s bean counters have predicted. When he’s issued a shiny new pair of boots, he finds he doesn’t need them. So he trades them to the guy who works on transporters. That guy wants a shiny new pair early, to impress the widow who lost her husband in a terrible transporter accident (totally not the transporter maintenance guy’s fault). Well, he has to trade something for them. Maybe he lets the Janitor beam all that vomit from the holodeck into deep space?

The point is, even in a cashless society, folks would have goods and services they could barter. And as countless science fiction shows have revealed, there is always a Klinger-like character who gets really good at that and accumulates a lot of material wealth through slick deals. My personal favorite was Lieutenant Krieg from Seaquest. The guy who managed to get Roy Scheider a burger in a world where beef was forbidden (a heart breaking episode for this cheeseburger lover). 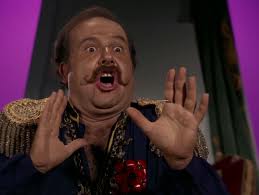 Eventually Klinger, or Harry Mudd if you prefer, would have enough junk accumulated to barter his way aboard a starship- or maybe even to get his own starship. He might even be able to get Captain Kirk, who’s decided to come out of retirement and will be in space most of the time anyway, to trade quarters with him- off the books, of course.

The point is, Picard is living in an alien probe-induced fantasy land when he thinks that people don’t still exist in the 24th Century who successfully gather wealth. Not everyone is Ghandi or Mother Teresa. There will always be folks who want to better their lives, rather than sacrifice so an unnamed stranger can be better off.

Yes, life in the Federation could be better than our own today. Or it could be like something out of Bladerunner or Judge Dredd, were the masses, who didn’t get into Star Fleet, live in boredom and poverty at ground level or in tiny, closet-sized sleeping boxes.

The only real way to have a society where everyone would be equal, where no one would seek to make it better just for themselves, would be one like the Borg have. Where they’re all machines, robotically working for a common, perceived/brainwashed good. And of all people to make the Communism-in-Space claim, Picard would surely be the last.