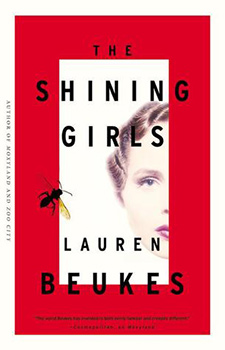 The premise of The Shining Girls sold me before I’d read a sentence from it or knew who Lauren Beukes was: a serial killer with the ability to time travel jumps across decades to kill women and escape capture, until one of his victims survives and decides to track him down to stop him.

The concept of the time-travelling serial killer isn’t new (the first time I encountered it was in Harlan Ellison’s “The Prowler in the City at the Edge of the World,” though I’d be surprised if it debuted there), but it’s far from the worn-out tropes much genre fiction insists on worrying over and over again. Plus, Beukes’ novel had the promise of a feminist perspective, something that’s sorely needed in the too-often-exploitative serial killer genre.

The reality of the book is more complex, though. While The Shining Girls delivers on the fundamentals of its pre-release promises, and offers some powerfully effective scenes, it’s ultimately a frustrating novel that can’t grasp its own potential.

One half of the story follows Harper Curtis, a Depression-era murderer who stumbles onto a House that allows him to travel to any future year he pleases (he can’t go before 1929). In the House, he discovers trophies of the murders he’s committed in the future and then sets about to make those murders a reality. He travels through time seeking girls who “shine,” who radiate a certain light that lets him know that they’re his designated victims. One of those shining girls is Kirby Mazrachi, a young Chicago woman whose story makes up the other half of the story. Harper’s attack on Kirby (in the late 80s/early 90s) is interrupted by her dog defending her, but Harper believes she’ll die of her wounds. He’s wrong, and after she recovers, Kirby begins tracking down her attacker to bring him to justice.

With that as its core plot, it should come as no surprise that The Shining Girls never drags. It’s got a propulsive motion to it and Kirby’s long-distance stalking of Harper makes for a nice parallel to his stalking of his victims. With it focus on action and plot, the novel rarely evinces a distinctive prose style, but some of its action scenes are brutally effective or laugh-out-loud fun.

The most affecting section of the novel is Harper’s attack on Kirby, in which he nearly disembowels her before murdering her. The scene is described in meticulous, gut-twisting detail, handled at such length and with such specific sensations that it was the hardest thing to read that I’ve encountered in recent memory. For example:

“Her throat makes a horrible gargling sound when she speaks. Blood pulses down her neck, soaking into her T-shirt. Gravity feels terrible. Increased a millionfold. Not the weight of the dog, his fur matted with blood. The weight of the world. She something come loose from her middle, hot and slippery.”

That’s strong stuff, and I found myself skimming some passages in that chapter to avoid confronting their horror too directly. Writing that powerful is rare and that chapter is a real achievement.

Another thrilling scene occurs close to the end of the novel during a fight in the House. That fight, which begins in 1993, carries the combatants (I’ll not mention who, to avoid spoilers) through the front door and into other decades as they battle. That’s a wonderfully smart set piece and will make for a great visual in the novel’s eventual TV or movie adaptation (it’s already been optioned for TV by Leonardo DiCaprio’s production company).

Just as often, though, the lack of a strong prose style causes awkward phrases, while some poor character choices thrust the novel into cliche.

Each Shining Girl gets a chapter (sometimes more) devoted to her life and her murder. Delving into these women’s lives is designed to both help the reader more deeply identify with them (and thus mourn their murders more) but also make Harper’s crimes seem more monstrous. And they might, if the women were a fully fleshed-out character. Instead, many of them are archetypes, prefabricated figures designed to represent their eras.

Many of these women, by their career and concerns, embodies some major development of her period in American history. The 1970s woman is involved with a group that helps provide access to illegal abortions. The World War 2-era character goes to work building ships, while there’s a woman working as a professional (and a suspected Communist) in a 1950s office. There’s a social worker, artist/junkie, and scientist in the 1990s. This approach isn’t in itself a terrible idea, but the treatment of history is so surface, and the pattern once identified so distracting, that it undermines the novel. How convenient that so many of the women Harper kills should be able to stand in for America in an entire decade.

Were the treatment of American history deeper, these issue might not have occurred. A complex grasp of the country’s past may be asking a lot, though, since Beukes is South African. Her status as not-American creates problems in dialogue, too. Beukes hasn’t quite mastered the American idiom, causing her American characters to employ oddly British phrases throughout the novel. Every time one of them crops up—which is every chapter or two—it’s hard not to glimpse the author standing behind these awkward statements. Can you hear, for instance, a Chicagoan saying “You wouldn’t have got round to it”? It’s not so far off, but that’s a British turn of phrase, not an American one, and doesn’t fit the mouth of a character who’s 20 years old, sharp tongued, and into punk rock.

In its last quarter, as Harper and Kirby move towards their inevitable confrontation, The Shining Girls picks up substantial momentum. When it gets to the conclusion, though, it comes up short, resolving with such speed that it’s almost like an offstage director was telling Beukes to wrap it up.

If The Shining Girls makes it to TV or film, it’s not hard to imagine it being a hit. The concept is terrific, the characters workable, the possibilities for visual executions expansive and exciting. But as a novel, it’s too uneven to fully succeed.

No matter the speed, the fast-forward button can NOT make a bad movie better. Mr. Martin gets down-and-dirty with this review and even manages to find one nice thing to say.

Care and Feeding of the Author in the House