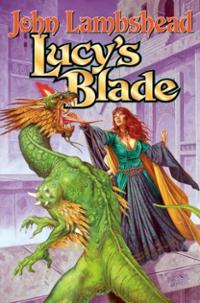 Lucy’s Blade is a deeply frustrating book. There is a core of a very good story here; I enjoyed reading it immensely. On the other hand, there are flaws within the book that detract from my enjoyment and leave me wondering just what the editor was doing. The problems should have been corrected before the book was actually published.

The basic idea is simple. Sir Francis Walsingham, Queen Elizabeth’s Secretary of State, is confronted with a plot to kill Queen Elizabeth. Unable to track down the mystery assassins, he orders Dr. Dee to summon a demon in the hopes of finding supernatural aide. Unluckily for him, his orphaned niece Lucy winds up bonded to a ‘demon’ called ‘Lilith,’ charged with magical powers (of a sort) and the realm’s ultimate defence against demonic evil. Lucy should be looking for a sufficiently aristocratic husband – rather, Sir Francis should be looking for one for her – not fighting demons. But there is no alternative.

Lucy herself is a wonderful character; she’s smart, funny and a little manipulative, trying to gain a little control in her own world. (Women had no rights in Queen Elizabeth’s England; the Queen’s refusal to marry ensured that she would not have to share her power with her husband, as happened to Mary of Scotland.) Despite being meant to be a sheltered flower, Lucy knows more about the world than Sir Francis would prefer – and means to try to make her own way, even before being bonded with a demon.

I also liked Simon – Sir Francis’s secretary – and I can’t blame him for feeling attracted to Lucy, before deciding that she isn’t what he wants in a wife. (And that he had few prospects of actually winning her.) Simon is also pretty much a deadpan snarker throughout the text, making snide – and often self-decrepitating – comments. Indeed, the book does an excellent portrayal of Elizabethan England, with quite a few period details that add a certain authority to the text. Queen Elizabeth herself makes only a brief appearance, but she certainly seems realistic; so, too, is Captain Hawkins, although his boisterous manner puts my teeth on edge. (I don’t blame Simon for disliking him, at least at first.)

Unfortunately, the book tries to do too much – and comes off worse for it. First, there is a section of the book set in our own time, which adds nothing to the plot and should have been ruthlessly cut. Second, there is the nature of Lilith herself; instead of being a demon, she is a hyper-evolved entity from the far future. This leads to some confusion; if there is no real ‘magic,’ how did the Spanish Enchantress get her powers? In effect, the book sometimes reads like a cross between Buffy the Vampire Slayer and Stranger in a Strange Land, as Lucy/Lilith moves between fighting and studying humanity. The first few chapters also seem to jump around at random, as if they were assembled out of order. It can be quite confusing.

A worse problem lies in the ending. We were told that the ultimate objective of the enemy is to assassinate Queen Elizabeth, a very common fear in those times. Instead, the plot starts to focus on Lilith getting used to living in Lucy’s body, then goes haring off into the Atlantic, with the assassination plot seemingly forgotten.

To be honest, I feel that the book would have worked better if the magic system had been real – perhaps something similar to the ritual magic shown in Black Easter (James Blish). It would have allowed for demonic attacks, while not creating a situation that threatened to overcome the main story with another plotline. Lilith could have been a demon seeking redemption, or simply evil and trying to mislead Lucy.

Overall, this book is enjoyable. But it needed to be rewritten before publication.