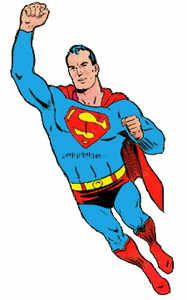 By now you have undoubtedly seen Man of Steel and I don’t doubt that you have some pretty visceral feelings toward the movie, not many of them good. Let me start with the good in this blisteringly bleak and depressing movie.

The Lois Lane trope, that of a reporter tracking down an urban myth-like sighting of a man doing heroic, superhuman deeds, was quite original. That, and actually tracking Clark to his home. It was a beautiful story, well-paced, and filled with warmth and curiosity (a characteristic necessary in Lois Lane). The second aspect of the film that I thought terrific was Kevin Costner’s last gesture. That, to me, was the heart and soul of the movie. It’s too bad the film hadn’t ended there.

Many people have written reviews of Man of Steel and I suspect there are many blogonauts at this site who also will have their say. I, though, wanted to take a personal approach to reviewing this movie. I take science fiction and all of its many forms–and this includes comics–very seriously. It’s part of who I am. (And I know it is part of who you are, regardless of your exposure to comics and when you first encountered them). I took Man of Steel very personally and when I left the theater I felt betrayed, angry, and ultimately sad. It’s a badly directed, totally unoriginal and quite depressing movie.

What disappointed me most was its unoriginality. It is, as you now know, a remake of Superman II, only in this instance Superman kills Zod. More on that in a minute. I knew going in that the film makers had decided to make Superman “dark” in keeping with the last three decades of the Batman movies. (We all know how well that worked in the last two–extremely unpleasant–Batman movies.) What first got me disappointed, despite Henry Cavill’s good looks and a charming Amy Adams as Lois Lane and an always-welcome Lawrence Fishburne as Perry White, was that the special effects were taken from several movies. We’ve seen the spaceships before and we’ve especially seen the metallic, segmented “arms” that Superman wrestles with in the last act of the film. A former student of mine who is now himself a film maker said that you can buy the CGI software that makes that one repetitive effect. We’ve seen those snaky, metallic arms in Spawn, The Matrix, and they make up the spines of the machine creatures in The Avengers. And if you’ve seen Transformers, then you’ve seen this effect at its most outrageous. I was astonished that the film makers chose to re-tell Superman II rather than tell an original tale (after all, several original Superman tales appear each month by DC and you can find them in any comic book store you can name) and I was also expecting different special effects. There was nothing in this movie that was new. Nothing.

Well, that isn’t true. As I mentioned earlier, the Lois Lane story and Kevin Costner’s role as Jonathan Kent were totally new, particularly his death.

I think the bottom line for me was that I felt changed by the movie. I felt as if I’d been laughed at and raped at the same time. And it broke me. I was laughed at by people in Hollywood who had no exposure to the true character of Superman these last 70-plus years and who only knew Superman from the other Superman movies.Their choice of General Zod really staggered me. General Zod was one of the most minor of Superman villains, at least up until they started the Superman series with Christopher Reeve in the Seventies; yet the film makers chose him as the villain for Man of Steel because it was easy. Nothing more than that. (And this is why none of them knew that Jor-el had told his son never to kill a human being with his powers or he’d have to exile himself from humankind forever. Lex Luthor kept trying to get Superman to do this throughout the Fifties and Sixties. I know. I read them all.) The producers didn’t have the wits to come up with an original script; they didn’t really want to spend the brain power to think of anything new; they didn’t even want to consult with any of the able DC writers in New York City who are, at this moment, writing original stories for DC comics. They took the easy route and slathered the movie with so many garish special effects and twenty to thirty minutes of (very needless) fist-fights that they hoped we wouldn’t see through what they were doing. Those of us over 40 saw through it, especially those of us who know what the fall of the twin towers in New York City on September 11th cost in real money. Billions of dollars. But in this movie, the collapsing buildings, ruined bridges, fractured tectonic plates, were nothing more than scenery to these film makers. The Avengers did everything they could to save New York; Superman and Zod reveled in destroying it (like Cartman and Stan fighting in the playground–which would have been more interesting to watch.)

That’s what saddened me, ultimately. The boring special effects. The wretched story. All that, and seeing the previews for Pacific Rim which is, of course a rip-off of Transformers and every Godzilla movie Japan ever made. And, no surprise here, it’s also a glamorized version of Power Rangers with the same special effects which I mentioned above from The Matrix, Transformers, and The Avengers.

Steven Spielberg and George Lucas have recently proclaimed the undoing of Hollywood, or at least the Hollywood blockbuster. They were referring to DVD sales, straight-to-video releases, and online streaming of movies–much of which will deprive them of billions of dollars. Those men, rip-off artists extraordinaire, wouldn’t think for a minute that the decline of Hollywood has anything to do with the lack of original storytelling in movies today. Man of Steel was a loud, ugly, and extremely unoriginal movie and I wish to God I hadn’t seen it.

Yet I know that there are enough 16 to 32 year-olds out there to make every one of these abominations profitable and they will continue to be made. Hollywood’s demise is only a myth.

As for me, I’m done. I’ll never see one of these CGI-heavy movies again, especially those of superheroes. I’ll stick to my collection of 1960s Marvel and DC comics and, like the old fogey that I am, yearn for the good old days before elevator pitches and easy-to-use CGI software that any seventeen-year old can mix on his laptop in his mom’s basement.