I was recently in London – less than a week ago to be exact – and had the great pleasure of once again attending another MCM Expo at the Excel Centre in east London. It was amazing! The figures have not been released on attendance yet, but this was my fifth time at the Expo, and I do believe that it was the largest crowd I’ve seen there. For those of you who don’t know what Expo is, here’s the rundown: MCM Expo is more than just a Comic-con. It encompasses quite a few genres including comic/graphic novels, television, movies, gaming, cosplay, sci-fi, anime, novels, steampunk, and much more.

While I’m in London I like to meet up with “digital” friends from Facebook and other online communities. It doesn’t always work out but this time – in addition to my regular English mates Scott Ward and Kris Kobus – I met with two more friends, Stu Tucker and Thomas Smart. We had been chatting online for weeks prior to Expo and Stu was especially excited what with it being his first event of this type. He and Tom showed up in full Star Trek gear.

After the usual greetings we chatted about all the people around us outside the Excel and the great costumes they were wearing, most of them of their own creation. Everyone I talked to and asked politely if they minded me taking their picture was most eager to be photographed. First there was a group of three guys who were dressed as characters from Men in Black and The Matrix; they were quite convincing.

Next was a bloke named Justin dressed as Dr. Who.

After that was a young lady named Eileen who told me she made her costume three years ago on a whim and had won a best costume prize on her first attempt. It was a quite stunning outfit.

I snapped a few more pictures of people – Batman and some random dude, 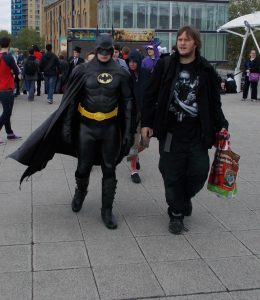 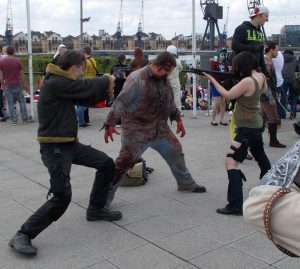 and a group of friends all hanging out in front of the Mr. Whippy truck. 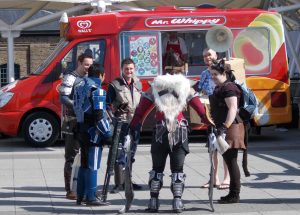 There’s even a photo of me standing behind Terry English, the costume designer from the Aliens franchise with one of the UK Colonial Marines group that my mate Kris belongs to. (I’m the one on the far right, running my mouth with my mate, Scott.) 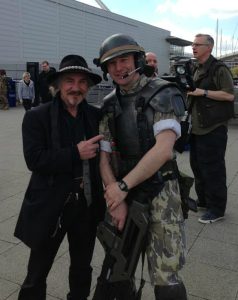 Around eleven o’clock was when the general public could enter so we queued up with the rest of the folks to get our tickets. We stood in line for over two hours! It really wasn’t so bad as we got to meet a lot of nice people and chat with them about costumes and favorite genres. Just before entering the exhibition hall I spotted a group of Stormtroopers posing for photographs.

Once inside I found Kris and his group, along with Gareth Ellner who is their Alien. Kris had just had surgery a few days earlier in the week but didn’t want to miss Expo. The true spirit of a Colonial Marine, eh?

There was even more to do this year than any previous Expo I had attended. There were makeup demonstrations,

artists drawing people as their favorite characters, discussion groups, video game trials, and competitions of every level, along with vendors selling everything from plush toys to collectibles and beyond. Back outside for a breath of fresh air we watch some cosplay down the embankment outside of the Excel. 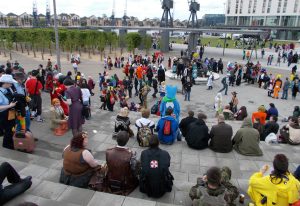 The crowd grew bigger and bigger as the day went on. 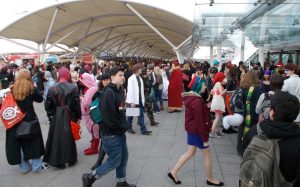 After some pub grub, we went back to the exhibition and watched as my new mate Stu had his face painted by a makeup artist to make him look more like Spock. After another turn around the hall it was time to go. It was a long, exhausting yet exhilarating day at the Expo.

Can’t wait for October and the next one!