Catherynne M. Valente’s new collection teems with floating lanterns and fox spirits, gods and baku and bears and animated calligraphy brushes, all revolving around the recurrent figure of a Western woman dreaming about a country she can never quite reach, even when she’s there. 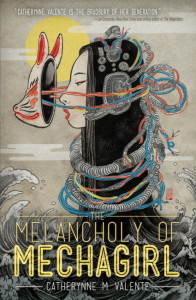 The American writer Sarah Payton Willis Parton, a divorcee raising two children on her own, published her fictionalized autobiography in 1855. “If you can make it here, you can make it anywhere,” Frank Sinatra sang of New York, but he never lived “in a dark narrow street, in one of those heterogeneous boarding-houses abounding in the city where clerks, market-boys, apprentices, and sewing girls, bolt their meals with railroad velocity; where the maid-of-all-work with red arms, frowzy head, and leathern lungs, screams in the entry for any boarder who happens to be inquired for at the door; where one plate suffices for fish, flesh, fowl, and desserts; where soiled table-clothes, sticky crockery, oily cookery, and bad grammar, predominate; where greasy cards are shuffled, and bad cigars smoked of an evening.”(1) In this shambolic environment, Parton hacked out a career as a columnist and novelist. Bathos alert! Her Ruth Hall is now a a popular subject among feminist literary scholars.

I bring Parton up because she strikes me as the spiritual godmother of American author Catherynne M. Valente, whose experiences in Japan, described in the afterword to her collection The Melancholy of Mechagirl, formed her as a writer and a person. This volume is subtitled “Stories and Poems” but that’s a bit of misnomer: “Prose poems” would be more apt. Of twelve pieces in this collection only two are recognizably stories and even in those not much happens. But that’s all right because you don’t read Valente to find out what happens next; you read her for the gorgeous, spooky, wildly imaginative imagery. In fact I could go further: one doesn’t seem to read The Melancholy of Mechagirl so much as one tastes, hears, smells, and feels it.

The beautiful presentation of the volume enhances the full-surround sensory experience. The Melancholy of Mechagirl is published by the team at Haikasoru who do such consistently fine work in bringing Japanese speculative fiction to an English-speaking audience. (Full disclosure: I shared a TOC with Valente in Haikasoru’s recent anthology The Future Is Japanese.) It’s clear where this collection fits in. “Japan is everywhere in my work,” Valente notes. “Even in stories that seem to veer elsewhere, it is present.” This certainly holds true for the prose poems (I’m just gonna call them all that) which make up The Melancholy of Mechagirl. From the touching elegy for WWII forced laborers which is “Ghosts of Gunkanjima” to the autobiography of a sentient house in Hokkaido (“Silently And Very Fast”), each piece breathes a seductive Japonesque fragrance.

A couple of months back I wrote an essay about Japonisme. Had I read The Melancholy of Mechagirl at that point, I would have included it in the essay as Exhibit A. This, my friends, is Japonisme at its weirdest, lushest, most erudite, most exotic (and yes, I do use that word advisedly. Exotic isn’t bad!). Here are kami and jizo, floating lanterns and fox spirits, yuki-onna and Momotaro, baku and bears, animated calligraphy brushes and ambulatory kanji characters and much, much more delightful stuff in a similar vein, revolving around the recurrent figure of a Western woman dreaming about a country she can never quite reach, even when she’s there.

Valente stresses that this “is not a book that purports to speak for Japanese culture, but does speak for its author.” And she did need to say this, because such is the “authenticity”(2) of her Japonisme that one could easily take it for an actual product of Japanese culture. The difference is that most actual Japanese people have never heard of half of the mythical beasties that traipse across these pages. I took an informal survey with a sample size of about ten. Imagine asking an ordinary American person (not a fan) if they’d ever heard of a naiad or a banshee. It was like that. The Melancholy of Mechagirl runs on Japanese folklore, not the pop culture we’re all more familiar with. You can taste the humidity in the tangled thickets of bamboo on the Kanagawa coast, hear the cicadas dinning in the darkness. Recall my definition of Japonisme: “that which pinches the scenery without attempting to pinch the characters.” For all the godlings and AIs and sprites and robots here, one thing not found in The Melancholy of Mechagirl is a single solitary Japanese human being.

Parts of this book are gonna stay with me for a long time. I used to hang out at a bar in Western Tokyo called Gunkanjima but I don’t know if I’ll ever be able to go back without hearing Valente’s ghosts whisper The water came in and the sea tasted like metal. Likewise, when I next travel out into the sticks, I know I’m going to be peering through the leaves for a glimpse of the House of Second-Hand Carnelian, and poor old Ko tending his rows of watercress on the riverbank.

The least successful parts of the collection are the parts trying hardest to be stories. “Fade to White” sags into cliche; “Silently and Very Fast” is overburdened with turgid imagery, which never quite sits right on the framework of an ambitious future history told entirely in flashback, at second hand. Some of the other pieces are slight, but redeemed by their brevity, so that their gloriously weird concepts aren’t overpowered by complication (“Killswitch,” “Ink, Water, Milk”).

Sarah Parton was a rarity, a female author who aspired to do more than soothe, seduce, and moralize. There still aren’t very many like that. Of Parton, Nathaniel Hawthorne said: “She writes as if the devil is in her; and that is the only condition in which a woman ever writes anything worth reading.” The same could be said of Catherynne M. Valente. On the evidence of this collection, I almost want to advise her to give up writing stories and stick to poetry. Yet, in melding the two forms, she’s developed a unique form of prose poetry, as beautiful and unexpected as her Mechagirl’s kittenish paws emerging from her giant angular titanium suit. Catherynne M. Valente is a writer to cherish, and The Melancholy of Mechagirl is a collection that shouldn’t be missed.

Amazing Stories has one copy of The Melancholy of Mechagirl to give away to a lucky reader! Leave a comment below to be entered for the random drawing.  (Free membership required to comment – no sharing of private information.)

2. Authenticity. Like good form, you can’t have it if you know you’ve got it! I submit that “authenticity” in the Facebook era means a simulacrum of naturalness. It’s kinda like a universal application of the Japonisme principle.

WIN BOOKS! An Editorial Announcement About Our Contests

A few years ago, the Experimenter Publishing Company (Amazing Stories, fyi) partnered through a licensing agreement with a company named Digital Parchement Services, otherwise also known as FuturesPastEditions;  DPS is one of the first ebook publishers and among the many many books they produce, they have established a specialty niche devoted to insuring that many […]

Mr. Jackson on the latest internet blowup. And freedom of expression.