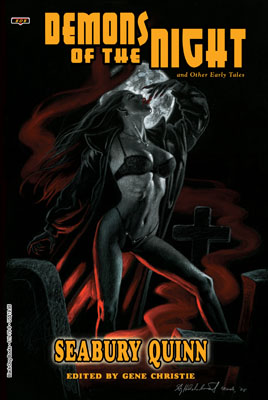 During the heyday of Weird Tales in the 1920s and 1930s, there were four authors whose work was probably the most popular among readers: H. P. Lovecraft, Robert E. Howard, Clark Ashton Smith, and Seabury Quinn. Of these, Quinn has largely been forgotten outside of fans of Weird Tales or weird fiction circles. If he’s remembered at all, it’s for his occult detective Jules de Grandin.

Which is a shame, because Quinn wrote a number of other stories that didn’t involve de Grandin. Of these, probably “Roads” is the only one that gets any attention these days. It’s a Christmas fantasy, which I looked at a few years ago on my blog, and has tended to stay in print.

Black Dog Books isn’t a genre publisher, per se. Rather it focuses on reprinting stories from the pulps. Most of their inventory could be classified as adventure, but there are some genre titles scattered among their catalogue.

Demons of the Night contains early ten stories plus one piece of nonfiction, a short article about how the law wasn’t represented accurately in the films of the day, including a number of examples. Since this article was published in 1917, I have to wonder how many of the films Quinn mentions still exist. This is the earliest known thing Quinn published.

Of the stories included, only the first three (“Demons of the Night”, “Was She Mad”, and “The Stone Image”) are outright horror stories. Several of the other tales have elements that lend a sense of horror to the events therein but turn out to be explained by natural causes. There are a couple of humorous romances, and the remainder of the stories are adventure tales. The romances and the nonfiction are recent discoveries and have never been reprinted before.

Battered Silicon Dispatch Box, a small press in Canada, is the only publisher I’m aware of currently reprinting Quinn. Their books are large and nice and professionally done. They’re also quite expensive. Demons of the Night, on the other hand, is quite affordable, especially if you buy the electronic edition.

However, I regret to say I have some issues with the ebook. There’s no interactive ToC, nor is there a page showing the cover illustration. The other complaint I have is the web page for the book says there an extensive bibliography of Quinn’s works. This is missing from the electronic edition.

Demons of the Night isn’t Quinn at the top of his game. These are early stories, remember. Still, they’re quite readable and, I daresay, better than much (most?) of what was being published in the popular fiction periodicals of the late teens and early twenties. The stories have certainly aged well. Yes, you can tell they’re not set in the present. But that’s part of their charm.  It’s certainly easy to see why Quinn was popular with the Weird Tales crowd.  The horror and adventure stories here move along at a brisk pace, and the dialogue is lean and crisp.

Given that the majority of stories in this collection aren’t fantasy or horror, Demons of the Night may be more of interest to the Quinn aficionado than the general reader. Still, don’t let that stop you. I thoroughly enjoyed the book. It’s a quick, fun read that’s different than what I usually read. Black Dog Books is to be commended for making these stories available again.

Sometimes I see a review on Amazon that makes me do the puppy thing – you know, cock my head and make that little “baroo?” noise. A friend shared a link to a book with an improbably high original price (marked down to free, for now, though) and seriously questionable antecedents, and after I laughed […]

Is the Higgs boson actually a ‘portal to the dark world’? – Futurity