Welcome internet traveler. I will be stockpiling neatly organized bits into a collective known as a blog along this portion of your journey. Do not fear for your personal safety, as I will take great care to observe the rules of hospitality during your visit.  As I am a certifiable Tech Geek, I will spend a portion of my efforts exploring the connection between science and technology and science fiction, fantasy, and horror literature.  Please observe all safety regulations as the bits in my collection coalesce.

As the latest installment to the Iron Man franchise is crushing the box office, I decided to take a closer look at the history and future of powered suits of armor. How fantastic is the Iron Man suit? How far are we away from realizing the science to pull it off? All important questions for a bona fide tech geek and Iron Man fan to consider. Don’t worry there will be no spoilers found here.

For the purposes of this discussion, we will classify the Iron Man suit as powered armor or a powered exoskeleton. That is the Iron Man suit provides both protection and assisted movement to the person wearing it. This is achieved through mechanical and electronic means. From the films we learn that the Iron Man suit is sealed against hostile environments so that it can perform underwater, at high altitude, through extreme temperatures, and even in the vacuum of space. The powered armor has flight capability from supersonic speeds to a stationary hover mode. Iron Man also comes equipped with a variety of weapons with which it can destroy its enemies. Handy tools include a cutting torch and underwater welding system. Did I mention armor plating? Iron Man can withstand some of the most powerful explosions even from a direct hit. A sophisticated artificial intelligence helps run the system at the verbal command of its occupant. If that were not enough, the Iron Man suit also has wireless connectivity. I wonder what digital network it subscribes to. 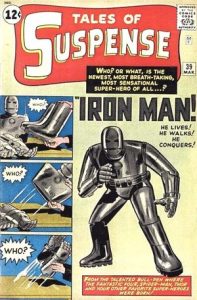 All of these high-tech functions require power, lots of power. For longer battery life than you can find on any smartphone or electric car, Tony Stark turns to the Arc Reactor that he created himself. The palm-sized power supply provides an infinite source of power–at least as long as the core lasts. After all he must replace the core from time to time, like I replace the batteries in my flashlight.

While Iron Man rules the box-office and our imaginations, the powered exoskeleton has been around for longer than we would guess. A collection of US patents were issued in 1890 to Nicholas Yagn for his exoskeleton. At the time it was not called an exoskeleton, but rather it was termed an “Apparatus for Facilitating Walking, Running, and Jumping.” The Russian scientist, Yagn, invented a mechanical system that strapped what amounted to leaf springs to the subject’s legs. The apparatus would transfer the body’s weight to the ground with each long stride, reducing the forces associated with running until they had little impact on the subject’s body. The intent of the device was to enhance the ability of the Russian Army to travel on foot. Though the patent was granted by the US and is frequently referenced in new patents with similar technology, there is no evidence that the Apparatus was ever built.

Yagn’s invention inspired the wave of technology that would follow. Always at its core was a desire to enhance the human body by providing more strength and endurance and, in most cases, create a super soldier. While still a long way from the Iron Man technology, his invention provided a blueprint. 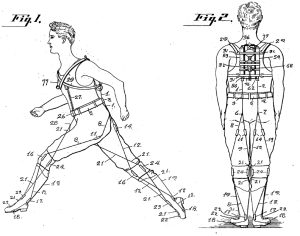 In 1919, a man from San Francisco, Leslie C. Kelley, was granted his own patent for what he called a Pedomotor. According to the patent Pedomotors are “power operated running devices to be applied to the human anatomy wherein sets of artificial ligaments operate in conjunction with operating and controlling means….”  His third and fourth assertions provide additional insight of his intentions to “…provide a power device adapted to relieve the muscles utilized during the running operation of the anatomy from strain and fatigue…to provide an improved power operated device that shall be adapted to impart greater impetus and thereby increased speed to the person.” 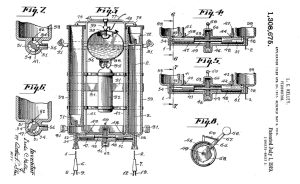 The Pedomotor sounds a bit like bionics for the outside of your body. Steve Austin would be proud. Kelley’s invention, however, would be more at home in a steampunk novel than strapped to The Six Million Dollar Man. You see, the Pedomotor was designed to operate on steam power. That’s right, the user would strap a small steam engine to her back. I can imagine a few safety issues with such a device. I would hate to envision the steam burns associated with taking a long jog up and down the hills of San Francisco. Perhaps Kelley might have been more successful if he would have been able to create an Arc Reactor.

As you might imagine, it is much easier to be granted a patent than it is to make use of the patent. The world is filled with useless patents. That’s not to say that Yagn and Kelley both had useless patents, quite the contrary. Both inventors were building a foundation. They were headed in the right direction. They just didn’t have the map that would lead them to the prosperity their ideas promised.

It wasn’t until the 1960s that General Electric and the US Military managed to create an exoskeleton that made it beyond the patent into a real working prototype. Named “Hardiman”, the invention allowed a human to lift 25 times more weight than normal. Unfortunately this design also had its limitations. In Iron Man 2, Tony Stark sits before a senate committee demonstrating how primitive the competing technology is. In one of the videos, we see a powered suit attempt to walk rather clumsily. As it moves forward it lurches to the side and collapses. So it was with Hardiman. GE’s try at an exoskeleton was so clumsy and dangerous that they never allowed a human inside it. 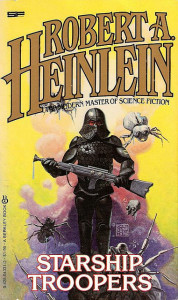 Around the same time that GE and the US Military were developing their monstrosity, another mind was at work. In 1960, a science fiction author named Robert A. Heinlein won the Hugo award for best novel with his book Starship Troopers. While the novel delves into deep political and philosophical issues, the Mobile Infantry Power Suit represented a key piece of technology. Three years after Heinlein received his Hugo, Iron Man made his first appearance in comics, gracing the pages of Tales of Suspense #39. Heinlein’s MIPS technology provided characters in the book the military advantage that Yagn had dreamed of in the 1890s for the Russian army. It seems even today the dream will not die.

Heinlein and Yagn and Kelley have inspired many inventors throughout the years, but it wasn’t until the turn of the century that we started to see the fruits of such labor. Now we have such inventions as the Human Universal Load Carrier (HULC), ReWalk, eLegs, the Power Loader, the Agricultural Exoskeleton, the MIT Exoskeleton, the XOS, the LOPES, the Vanderbilt, the Honda Walk Assist, the REX, the LIFESUIT, and even HAL. Wow, so many. It seems that exoskeleton technology is exploding right now. Each of these inventions builds upon those original ideas. At their core they are all the same- a powered frame that is strapped to the human body to enhance strength, speed, and endurance. Such a simple invention, yet so complex.

As always, invention is driven by need, need inspires funding, and funding enables results. So it is with exoskeletons. The oldest motivation was for the enhancement of soldiers, and that certainly remains true today. But so many more markets have opened up for the exoskeleton. Imagine construction workers strutting around in them. Emergency workers clearing rubble after an earthquake. Hospital and nursing home workers assisting people more easily, lifting patients from the bed. Someone with disabilities might be able to walk again. Exoskeletons are filled with possibilities.

The costs for these exoskeletons remain high, but the technology has finally caught up with the dreams. In the decades ahead, we will see these in common use across many applications. But with all our advancements, we still fall short of designing the first Iron Man suit. Today’s most advanced exoskeletons seem nothing more than steam-powered contraptions next to Tony Stark’s creation. Perhaps it will take us another hundred years to get there. Perhaps it will take much longer. Maybe in a hundred years, we’ll find out that we can never make the Iron Man suit. It doesn’t hurt to dream, and it doesn’t hurt to try. A hundred years ago, Yagn may have looked the fool, but today his dreams have come true.

All Aboard for Mars! A True Story

Today we are joined by legendary author Lois McMaster Bujold. Lois writes fantasy and science fiction that marches side by side with the greatest authors the genre has ever known. Her trophy case includes five Hugos, three Nebulas, three Locus, a Skylark, a Mythopoeic, and numerous other awards. Her list of nominations has grown so […]

ISS is routinely peppered by micrometeorites