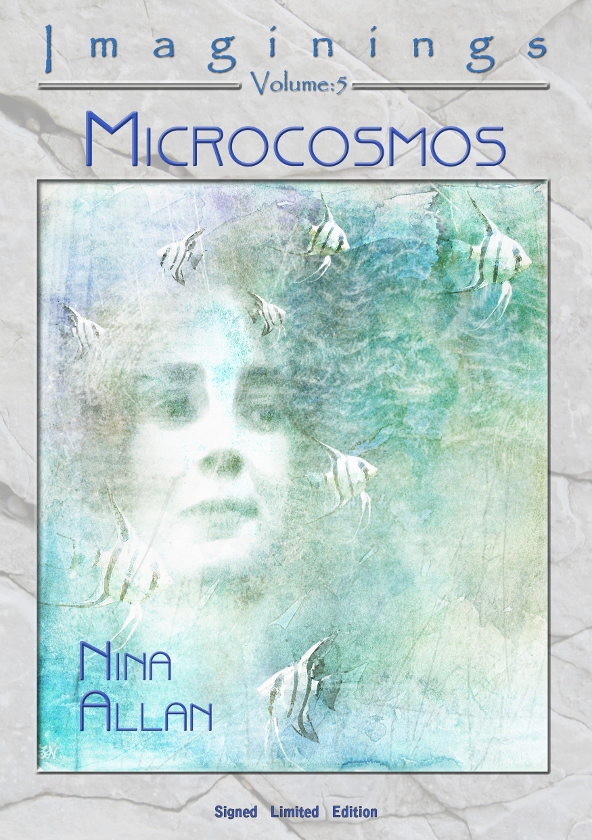 In the Forward to Microcosmos Nina Allan explains that, having forgotten the finer details of the requirements for the collection, with her stories tending to ‘run away with themselves’ and being rather long for short stories, she had amassed considerably more material than the book would be able to contain. She had intended a survey of her work from the publication of her first book, A Thread of Truth (2007) up to The Silver Wind (2011). However, with a target length of 60,000 words, she ‘decided to shape the collection around the two new stories’ which would feature in Microcosmos. ‘Without abandoning my idea of presenting a survey of the kind of stuff I’d been working on since A Thread of Truth, I now began to see the book as a chance to show what I’d been working towards, a statement, if you like, about where I had got to.’

Microcosmos contains seven stories in 191 pages. The title story is the oldest, dating from 2009. Melodie is with her parents on a long, uncomfortable day trip to see Ballantine, who has had a disastrous relationship with Melodie’s aunt. As in many of these stories what is not said is as important as what is. Lakes have dried up, the land choked with bramble and giant hogweed. There is an ambiguity, a tension, when Melodie is left alone for a short while with Ballantine, not least because we never know how old she is. Ballantine opens up a new world of possibilities for her, the hidden universe of the microcosmos. An unsettling few hours in a life which leaves a lasting impression.

‘The Phoney War’ has a similar structure. Nicky is spending the day going to see her old friend, Sophie. The journey is difficult, first by train, then hitching. Sophie lives in sight of the decommissioned reactor at Dungeness and the two women haven’t seen each other for years, not since Sophie’s breakdown. Society has also broken down, especially away from London, because a ‘SETI project in Alaska had intercepted some radio broadcasts of unknown origin.’ Or is the government just taking people’s minds off the fuel shortages and power cuts as things fall apart? ‘Phoney War’ is a bleak, evocative portrait of a future England. It could be the same future described in ‘Microcosmos’, or not. It doesn’t matter. Friendship does.

‘The Phoney War ‘makes passing reference to poems written by a woman in a Soviet prison camp. ‘Chaconne’ is set at the end of the Second World War. Alena has survived, from Leningrad to Tashkent, and now has returned to her father’s house in the woods near Kiev. She was a classical musician, a pianist, but now circumstances have turned her toward composition. She finds the family cat, named after Tchaikovsky’s Snow Maiden, emaciated and sick, somehow another survivor. Alena is looking for Orest, who called Snow Behemoth after the demon in a novel by Bulgakov. Something strange happens in the night. In the morning there is good and bad news. There is a sense of renewal after the horror of war, of partings and reunions, of something which may be supernatural, or not.

Marian’s grandmother may once had have coffee with Adolf Hitler. The evidence either way is never conclusive. Marian’s mother doesn’t like to talk about it. And if it is true, does it matter? Could a fourteen year old girl who saw a boy as she was going to her piano lesson have done anything to change the history we know? ‘A.H.’ is one of the two new stories in Microcosmos. the sense of uncertainty stirs Marian’s imagination, causing the reader to reflect on the turning points of history.

In ‘Orinoco’ Marie lives with her brother, Brian. She meets Alan Noakes, the chief accountant at Brian’s firm. The two men share a passion for tropical fish. Marie has not had a lover since Rob died, victim of a terrorist bomb, when she begins a relationship with Noakes. She makes soup from an old Soviet Union cookery book and buys mushrooms from two elderly Russian sisters who run a delicatessen in Highgate and claim to be refugees from Stalin. There is something very important that Marie has not remembered in this moving story.

‘Flying in the Face of God’ is the most obviously science fictional work in the collection. It was nominated for a British Science Fiction Association Award in 2011. Rachel is about to leave, going into space. ‘The outward effects of the Kushnev drain were many…’ the process which has changed her physiology to enable her to become a flier. Anita is saying farewell to Rachel, having come close to her, made a documentary film about the women of the Aurora Space Program, having lost her own mother when Aurora One was sabotaged. Anita goes to visit her grandmother, now in a retirement home in Shoreham. Climate change is becoming more pronounced, even in her youth there were dry hours when the taps didn’t run. Life carries on against all challenges and the sense of important things not said, not realized, never grasped makes ‘Flying in the Face of God’ both intriguing and poignant.

In the forward Nina Allan writes that there is ‘a deal of autobiography’ in the last and most recent story, ‘Higher Up’. ‘ – the passages describing Laine’s experience of 9/11 describe my own almost word for word, with the notable proviso that Laine was ten at the time and I was, let’s see, 34.’ Laine left school to work at Heathrow Airport and now her partner is airline pilot Captain Willem van Doer. When Willem is away on a flight the nighttime radio sometimes brings Laine a broadcast, ‘the final communication from the cockpit of United Airlines Flight 259.’ ‘Higher Up’ brilliantly depicts the impact of 9/11 on a young girl and the terrifying it has over the woman she becomes.

Microcosmos is the fifth single author collection in the Imaginings series from NewCon Press. It is published as a signed, limited edition hardback of 125 copies. Price £19.99. You can order it here.

You can read my review of the NewCon Press title Imaginings Volume: 4 Objects in Dreams, by Lisa Tuttle, here.

Your Majesty, I’m So Over You

Understanding the Sexism of Fantasy

Hello and welcome to August! I was away for much of July on a “blogging vacation”, and I very much missed you and our ongoing genre mash-up conversation while I was gone. Now that I’m back, this month we’ll be looking at the ways in which speculative fiction intersects with spy fiction, from John Le […]

Hagridden and Terrors of the South