Home Film/Televison It’s All About the Vessel

In 1961, Science Fiction producer director Irwin Allen brought us the film Voyage to the Bottom of the Sea. The fast paced disaster movie revolved around a newly designed submarine called the U.S.O.S. Seaview. The crew’s mission was to launch a nuclear missile into the sky in order to save the planet from the fiery Van Allen belt which had been ignited by a meteor shower. This was great near apocalyptic drama filled with mystery and suspense. (C’mon. It had what I like to call “forgivable plausibility” for a 1961 science fiction story.) Later that year, Pyramid Books released the novelization of the film under the same name, written by Theodore Sturgeon.

The movie recently aired on television, so I made a point to sit down with my kids and share this cherished memory with them. To my pleasure, they enjoyed it as much as I remember enjoying it at that age. Much wiser now, I laugh at the science while still admiring the creativity that made it such a classic. But my journey down memory lane did not stop there. A few weeks ago, I stumbled across a paperback copy of the novelization (fourth printing, 1967) at a used books store and all of my childhood memories of the story came storming back yet again. I don’t believe in coincidences. Voyage to the Bottom of the Sea needed to be reviewed. 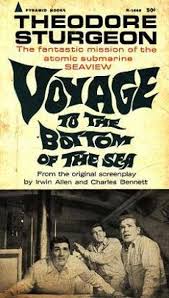 So I sat down and read the book. Though the gist of the story remains loyal to the original film, there are a few acceptable discrepancies between big screen and book. When the story later moved to television in 1964, the adventure took on even broader challenges and exotic locations. But after seeing the movie again and rereading the book, I realized my “review” was becoming clouded through my childhood fondness of the Seaview. That’s when it hit me. It was all about the vessel. Sometimes, no matter what plot, setting or character development evolves from the story, a prop can become the most valuable element. And in the case of Voyage to the Bottom of the Sea, it didn’t matter which media outlet was used. The stylish craft was the main character, the primary setting, and essentially the plot of the story. It’s simple as that. Review complete! Read the book. See the movie.

My earliest recollection of Voyage to the Bottom of the Sea was from the television series. And as a young viewer, it was the image of that awesome submarine that stood out. Even later in my teens, I dedicated hours meticulously painting and gluing together a plastic model of the sub. In my eyes (then and now), it had more character than any one person who appeared in the story. Though the Flying Sub was astonishing in its own right, we will leave the craft which made its debut in the second season of the television series out of this discussion. Like most well developed characters, it was the Seaview which had the personality to stand out from all of the others.

Okay. Its 1961 and massive atomic submarines with top secret technology are things of science fiction. A vessel like the Seaview cannot operate without an equally massive crew. But regardless if they appear in film or in print, a talented crew is nothing without a charismatic character of the Seaview. 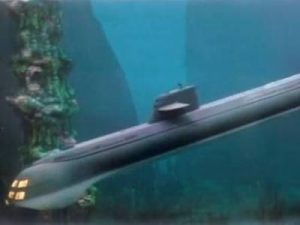 With sweeping manta ray wings flaring out from the nose of the sub, the unique design became the soul of the Seaview character. Various versions of the sub appeared on the screen throughout the years. To devoted fans, there is the notorious eight-window vs. four-window conspiracy. But looks can be deceiving. According to the book, hull plates were made of transparent “X-tempered herculite” which gave the illusion of forward ports. On film, distinct rectangular windows made up the front viewports. Not as magically perceived as the book, but visually effective none the less. To a fan blinded by the sub’s pure awesomeness, the character still came from the pectoral wings.

I understand the generation gaps where old becomes new. I also understand that with all of the retreading of story ideas and the plethora of movie “remakes” flooding the theatres, it’s refreshing when something new comes along. That is unless somebody decides to revisit Voyage to the Bottom of the Sea. This science fiction classic needs to be revived for an entirely new generation to enjoy (that is, as long as J.J. Abrams is not involved). But if it does ever happen, the design and character integrity of the U.S.O.S. Seaview needs to remain. Face it. It’s all about the vessel.