After a series of interviews with self-published authors, I thought I would interview a reader. Or rather, three of them, Sanford Begley, Joseph Capdepon II, and Jack William Finley. (Jack is also a writer.) They were gracious enough to answer my call for reader input on what they read, why, and what they hate seeing in books.

Also, I would like to invite any of my readers here on this blog to my first reading and signing of Vulcan’s Kittens. I will be at Mansfield’s Books in Tilton, NH from 3-6 pm on May 10th. I will have copies of the book for sale there, and the owner has a wonderful selection of used books, including some fun vintage SF paperbacks I covet but haven’t room for!

Cedar Sanderson for ASM: What do you like to read? 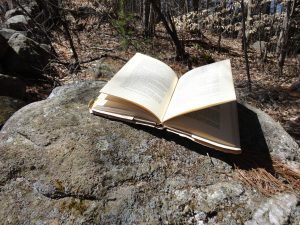 Joseph Capdepon II: I will read anything that seems the least bit interesting. The only thing I don’t read is Romance or those weird teen supernatural angsty books. Science fiction though holds a very special place in my heart. I am also a huge fan of reading history.

Jack William Finley: As a reader-something with well written interesting characters, ideally doing something different than you’d expect them to do, but still believable.  Something fresh, something alive with possibilities.

As a writer-everything.  You learn as much, sometimes more, about how to write well, from reading someone else doing it badly.

Sanford Begley:  I prefer SF/Fantasy, Westerns, and mysteries but, cereal boxes will do in a pinch.

ASM: What makes you say ‘never again’ to an author’s work?

JC: I have to be bored with the writing or the author has to really piss me off in some way. I’ve never really run into any author that has pissed me off. I have run into ones that bored me. Anne Rice, Robert Jordan, and various indie authors. What keeps me coming back to an author. Obviously they tell good stories and write them in such a way that it is enjoyable to read.

There are authors though whose prose is just amazing.

Ray Bradbury, Dan Simmons, Clive Barker, are three that immediately come to mind. How they use the English language to tell the story is amazing.

Terrible prose is also a turn off. That is what happened to me with Anne Rice. I tried reading Interview with the Vampire and it was clunky and just did not flow well. I did not finish the book. Terrible prose will cause me to shelve a book faster than a poor plot.

JWF: One thing that makes me crazy is writers who don’t have any respect for the characters.  Don’t treat them like puppets; treat them like your family.  Characters shouldn’t do things that contradict the psychology you have presented, or failed to present.  Everything they do should be believable based on everything you have presented about that character up to that point.  So many characters do what they do for no reason other than the plot requires them to do it.

Characters should ‘feel real’.  You should be able to imagine they have lived a life before what you’re reading and if they survive will go on living after it.

Another mistake I see often is characters doing things and reacting to them as if they have never done these things before and yet the story makes that impossible.  Given the story they must have done this many, many times before.

SB:  Bore me or make me hurl. One exception is an author who is a good writer, but while I agree with his politics and the political things he says, he sends my blood pressure  skyrocketing.

ASM: How do you find an author, and what keeps you coming back?

JC:  I will use an example for this one. I was walking through Barnes and Noble and I noticed this book on the shelf called Monster Hunter International by Larry Correia. It was published by one of my favorite publishing houses and the cover looked like lots of fun. So I picked it up and started reading the first chapter. I was hooked and I have bought every book Larry has published since.

Same thing with John Ringo, except I was working at B&N at the time and took a mass market home that had been stripped. That is how I found Baen.

Otherwise, I listen to what friends say because I do have a circle of friends who are avid readers and they usually steer me in the right direction. I also browse when I’m in a book store. I pick up a book that may look interesting, read the blurb on back then usually open it up and read the first couple of pages. If it catches my interest, I buy it. If it doesn’t, it goes back no the shelf.

JWF: I think finding authors, especially in the internet age, is almost too easy.  It’s like finding story ideas.  It’s almost hard not to hear about someone doing good work or and interesting story that’s coming out if you pay attention to the writing world.  The hard part is sorting out the really good ones you have to read right now.

What keeps me reading a writer is wonder.  It’s about always keeping the reader wondering exactly what’s going on and what is going to happen next.  It’s that curiosity, I think, that keeps people reading.  Also, characters that you think about even when you don’t have a book in front of you.  Fictional people so alive in your head you imagine what they might be doing from one book to the next.  Filling up all those empty spaces the writer leaves in your imagination.

SB:  So many ways it isn’t even funny. Pick one up for the cover/blurb, friend recommendations, it was there when I had nothing to read. I keep coming back if the writer spins a good yarn without becoming too repetitive.

ASM: Do you pay any attention to the author, or the publisher?

JC: Yes and Yes. Usually anything with Baen on the spine, I will buy. There are other authors that I have been a fan of for a long time, Terry Pratchett, Raymond Feist, Kevin J Anderson, to name a couple that I will buy when they release something new.

JWF: I think, especially in this new world of self-publishing and the internet, it’s important to be open to really good work from any source, but you just can’t read everything and the truth is there are authors and Publishers I trust to give me good stuff and some…not so much.

SB:  Sometimes, I now look for the Baen logo but that is a fairly recent development, say the last 10 years. Of course if I know the author is a reliably enjoyable writer I look for that.

ASM: How many editing errors do you notice, and when is it ‘too bad to keep on’?

JC:  I only notice it when it takes away from the story. I had a friend who wrote a book and asked me to read and review it. It was terrible. It really needed the touch of an editor. I couldn’t finish it, even though I tried.

JWF: I don’t think there is ever a rule here.  I want a publisher and a writer who are professionals, but one of the very best stories I ever read was a small press E-book that just wasn’t proof read at all. It was horrendous from a technical stand point but the story was just so good I read it straight though and just didn’t care about the mistakes.  What bothered me most was that it deserved a much bigger audience it will never get because of the way it was first produced.

SB: Unless it affects the story in a blatant way I don’t really notice, I am definitely not a grammar Nazi.

ASM: As a reader, what offends you in the story? Bad plotting, writing, poorly developed characters, or…?

JC: Terrible writing and transparent two dimensional characters. Overtly bad science, science so terrible that my suspension of disbelief is completely nuked. Terrible description of firearms and how they work.

JWF: Mostly I think it’s just a matter of respect the reader.  Don’t assume the reader is dumber than you are.

If you don’t know something for goodness sake look it up, don’t assume the reader doesn’t know or won’t notice.  Be consistent; don’t contradict things you have already stated.  Things happen for reasons, the reasons aren’t always clear and they may only make sense to the people motivated by those reasons but don’t think as a writer that you can just do any wild thing you want to in any scene regardless of what you did in the scenes before.

Don’t be lazy.  Don’t just re-tell something a hundred other writers have already done before and probably better.  No matter what anyone tells you there are always fresh new ways to look at even the oldest most over used ideas.

It’s the little things that make me want to heave a book at the wall.  Know a little something (better still a hell of a lot) about how the world works and how and why people do the things they do.

SB:  Bad writing, plotting, cardboard characters, polemics, lots of things. Any one of which can be forgivable if everything else is really good

Life Cycle of a Novel

Keith West has noticed a shift in his reading habits – away from traditional imprints and towards small indie presses. Have your reading habits changed?

My Portals to Escapism

What I Mean When I Say…