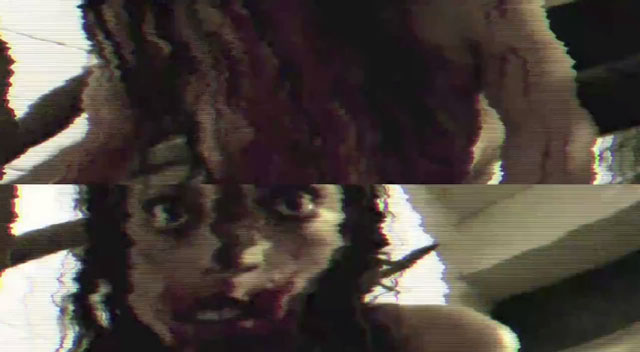 If you’ve been watching horror movies for the last 15 years, you’re bound to have noticed the proliferation of hand-held, homemade horror films that are being made. A few weeks ago, I mention a movie I’d watched, Sean Stone’s The Asylum Tapes which used the grime-y authenticity of cheap digital cameras to add a lo-fi, visceral edge to his haunted asylum film. Since then, I’ve had occasion to see V/H/S, released last year, which went for a similar effect, and was deadly effective, in my opinion. The handheld found footage look like YouTube grit, all the more spooky for their apparent reality.

Watching handheld, first person horror films makes it seem as if you ARE that person, like it’s happening to you. There was a scene, and I think it was in V/H/S, where the person filming was getting mangled, and you could see their arm twitching on the ground. It made me feel as if it were MY damaged limb, flailing in the dirt.

Ever since The Blair Witch Project, in 1999, with its clever indie marketing ploy, hand-held horror films have proven to be an effective way to rise above the crowd, to get your film noticed. It was an interesting, modern angle that reflected the reality most people are surrounded with. It was a hook that left people wondering, that left the film haunting your brain. With a number of these films becoming highly successful, producers became willing to take a shot, throwing everything at the wall, to see what sticks. So that means that there’s a lot of them that are going to get made, and there’s going to be a lot of terrible ones, and a few really great ones, but it means that for better or worse, they are likely hanging around, and we are left to ponder the implications.

One of the interesting aspect of these films is their air of authenticity, the unbiased gaze of the surveillance device. Normally, when we go to the cinema, we are engaging in a game of make-believe; we know what we are getting into. There are rules – a beginning, middle, and end. You emerge, squinting, into the daylight. With hand-held, or found footage films (which I hope to speak on, later), where the film ends becomes blurred, the film has no ending. We are left questioning. That is part of the ruthlessness of modern art – it erodes. They will destroy everything, including your sense of self, and the limits of reality.

By watching the increasing onslaught of first-person horror films, I think our sense of self IS being eroded. We are yearning to see how other people see, to see it from someone else’s point of view. I think it shows a softness of self, and I guess the question is: Is this philosophy rising, because of the media that we are surrounded by, or is it coming up because of the Philosophy?

Regardless of the cause, I think it’s safe to say that watching this kind of film DOES have an effect on you, and how you see the world. Watching the world through someone else’s eyes, and empathizing with how they feel, shows a desire to connect. In a way, this is almost entirely opposite of what you’ll see in the classic horror form, where you DON’T want to empathize with someone being hacked to bits. I mean, even the urge to experience such ghoulish infernoes, first-hand, raises a million contrary psychological Death Wish issues, but that’s another topic. I think it expands the limits of what seems possible, the fact that these movies inhabit a grey-zone, an art-reality, that opens up possibilities in our own lives, our own perceptions. It makes things more interesting.

Part of what I hope to do, here at Amazing Stories, is to both honor the classic journalistic forms this blog is modeled after, as well as point out the differences in how it is being transmitted, the modern media. Let’s call it PAST, PRESENT, FUTURE. We are bound to be psychologically effected by our surroundings, and if you’re anything like me, you’ve probably experienced about 10000 hours of haunted house flicks, zombie comics, abandoned space stations, and faux-real possessions. At Amazing Stories, we are sorting through the rubble and jotting down our fieldnotes, finding the brightest, dumbest, most perplexing art of the last 150 years in a wide array of fantastic genres, and i know i, for a fact, have been effected by the experience. We will continue to unfurl the implications…

Here’s a couple of hand-held POV films, to leave you questioning reality, to lose yourself behind another pair of eyelids for a time:

cannibal holocaust (i’ve never seen this, but its famous)