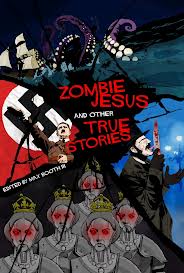 Horror and alternate history are difficult genres to mash up. You just don’t see them together very often and despite my firm belief in the adaptability of alternate history, it is rare when you see an author effectively combine horror and alternate history tropes into a compelling read. When it is usually tried we are presented with a dystopia (any Axis victory scenario will do) or some Lovecraftian inspired tale (i.e. “A Colder War” by Charles Stross or “The Beast of the Bosporus” by Matthew Quinn). The ability, however, to convey sheer terror to the reader while asking them to accept a counterfactual setting, may be too much for their suspension of disbelief to handle.

That brings us to Zombie Jesus and Other True Stories, an alternate history horror anthology edited by Max Booth III and published by Dark Moon Books. I won the book during a Goodreads contest and have been meaning to review it for a while and as I wrap up my coverage of science horror, this was as good of an opportunity as any. Right off the bat I have to give credit to Max for being nice enough to sign the copy he sent me. I always felt authors (or in this case, editors) should sign the works they are asking people to review. It is a classy move that does not require a lot of effort on the part of the creator.

You didn’t, however, come here to hear me talk about autographs. The content of the anthology is what counts and how much can I say without ruining the plot of the fifteen short stories that make up the collection? I will give you a general description of the anthology itself. There are the obvious Lovecraftian influences, plus tales set in a victorious Nazi Germany or an independent CSA. Two great settings really for a horror/AH tale, but still overdone. Plus there are some stories that are not horror or even alternate history per se. “Culture Sculptor” by Charlie Fish was a good of example of this dilemma. One of the better written stories in Zombie Jesus, the story follows a young PI who uncovers a conspiracy behind all of the deaths of celebrities and other VIPs of the 20th century. The problem is all the deaths he is investigating happened in our timeline (OTL as we alternate historians call it) making it more of a secret history than alternate history. Meanwhile, despite being stalked by people trying to kill him, I never thought the protagonist was in any kind of danger unusual to a typical thriller or mystery hero.

But does this mean the anthology was bad? Actually, no. I found all the stories to be quite satisfying, but the handful that did not go along with the theme made me question their inclusion, but it was not due to the author’s storytelling abilities. Perhaps the aforementioned difficulty in melding alternate history with horror can account for the odd choices. My main gripe, however, has to be the cover. Now usually I don’t complain about book covers and from an artistic viewpoint Zombie Jesus has a good one…except for the swastika and Hitler framed just to the left of the title. Perhaps I am making a big deal about nothing, but I always felt uncomfortable taking books that depict the swastika or the face of Hitler on their cover out in public. If someone can make the jump that reading Harry Potter is a form of devil worship, I don’t find it too difficult for them to leap to the conclusion that I am a racist based on the book I’m reading. Does anyone else have this problem?

I hate to throw a book under the bus just because of its cover, but it is a major hold up of mine and I can’t ignore it. Despite its questionable cover, Zombie Jesus as a whole is good collection of short stories, even if some of the inclusions are only borderline horror/AH. If you are looking to check out some new fiction from writers you may be unfamiliar with, Zombie Jesus and Other True Stories is worth checking out, but die-hard horror or alternate history fans might be disappointed.

From the In Box: Oblivion Already Taking Hits

There is a lot more to Richard Matheson’s The Shrinking Man than giant spiders and cats. It is the discovery that the amazing journey of life continues on infinitely, no matter how miniscule we become.

A pillow, and a silent scream

I Got Them Old Kon-Going Blues Again, Momma.