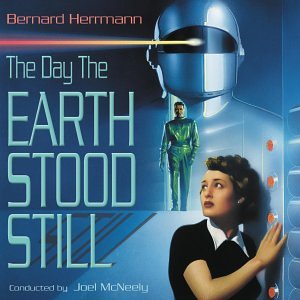 When I was a kid, I saw a cheezy science fiction B movie wherein someone was playing an instrument that looked like a small organ with a hemispherical keyboard, and before him was a screen that lit up with all kinds of colors that was meant to be part of the music (I suppose). The music was all electronic wheedles, bloops, whistles and hoots. The scene was a throwaway, lasting only a second or two but it was meant as a minor trope in the movie to “suggest” what music of the future would sound like. The great irony here is that while I have no idea what the title of the movie was, I do remember the scene.

Of course music of the future never came to sound like that; nor have instruments come to look like that–even though we still have organs and we now have computer screens before our instruments, especially at rock concerts, that show the score as the music is unfolding. The reason why we don’t have those spacey instruments is that we live in the future now and are surrounded now by the music of the deep past (Hildegard Von Bingen, Peter Tchaikovsky, and Cole Porter) as well as music of the vibrant present (Rihanna, Beyonce, Lil Wayne–if you want to call the music of Lil Wayne music, but you get the point).

No one ever thinks of the future in terms of music and there have been all kinds of efforts in “classical” music to capture a sense of the future. Karl-Birger Blomdahl’s opera Aniara is based on Swedish poet Harry Martinson’s epic poem of the same name. The poem, published in 1956, helped Martinson win the Nobel prize. (Aniara is about a World Ship that’s heading off into deep space, off course and doomed. The music is stark, atonal, and very dramatic. Like most of Blomdahl’s music, it’s very 20th century, post-modern and curiously romantic. If it takes of any kind of modernism, it that of Alban Berg rather than Arnold Schoenberg, the school more Scandinavian than Second Viennese. That is to say, the music is of today; it only sounds like the future.

American composer Tod Machover wrote an “electric” opera in 1987 based on Philip K. Dick’s novel VALIS. It was critically well-received and is quite listenable. Unlike Aniara Machover’s VALIS draws from contemporary musical modalities, mixing atonal with quite tonal passages. It’s in the harmonic tradition of John Adams and you can find, in the choral passages, some of the syncopations common to Steve Reich’s minimalism. Since it’s unlikely that you know any of the music of the people I’ve just mentioned, it’s all to say that composers of today really do operate within what’s known rather than what they imagine what’s to come.

One composer who did write for the future was Charles Ives. When he composed his Three Places in New England in 1910, he said that he didn’t think there was an orchestra on the face of the earth that could play it. This didn’t prevent him from writing it, however. In that work, he has two marching bands, playing two different marching songs, coming at each other. Here you have two conflicting doppler effects–both the clashing of two songs that are each in a different key and each being played at conflicting tempos. And all of this is meticulously written down in a score, none is improvised. Leonard Bernstein later said that it was one of the most difficult works to perform but became one of the most skilled conductors of Ives and the work is performed regularly around the world.

The only composer who really captured the future (or at least an alien sensibility) was Bernard Hermann who wrote the score for The Day the Earth Stood Still 1950. (You can find this on Polygram 4265 along with his suite from Journey to the Center of the Earth, The Seventh Voyage of Sinbad, and Fahrenheit 451.) You can also find the opening theme on You Tube.

The eerie sound you hear in the score is from an instrument called the Theremin, device invented by Leon Theremin in 1928. The Theremin consists of two metal antennas which sense the position of the player’s hands and control oscillators for frequency with one hand, and amplitude or volume with the other, so it can be played without being touched. You’ve all heard Theremin music before. The rest of the soundtrack to The Day the Earth Stood Still is quite romantic and dramatic, typical of most movie music.

But back to Lil Wayne. I should say up front that I don’t like rap music. Intellectually I understand it and I understand the musical culture from which it arises, but I don’t like it. I won’t listen to it and I won’t take it seriously (even though it’s a multi-billion dollar industry). However, I was quite aware of it’s appearance in the early 1980s and I watched it evolve both on MTV and the radio. I found it interesting simply as a phenomenon, but it also made me think about where music comes from and what it might sound like in the future.

One aspect of “new” music that I’ve found recently is in the soundtrack to the television mini-series remake of The Prisoner. The music is by Rupert Gregson-Williams and in it he uses an electronically distorted cello to mimic Algerian and Arabic modal lines. It sounds discordant, but only because we’re not used to the music from Arab cultures. Sting did this in 1999 in his song, “Desert Rose”, wherein he performs a duet with Algerian singer Cheb Mami. This music is sometimes called World Music, but it’s the future of music as our cultures mix.

Music in the future won’t be bleeps and warbles and electronic toots (or rappers chanting about how much bling they have). It’ll sneak up on us slyly. Some new instrument will be invented. Some new melodic cadence will spring out of nowhere (like the music of the Beatles) and startle us. If your ear is attuned, you can hear it happening this very minute.

Lost In Space! Reviews of Unknown or Underappreciated Books Post #5 The Apocalypse Troll by David Weber

The Artful Collector: Price vs. Value

Brian W. Adliss remarks on life and writing in the lastest of the Science Fiction and Fantasy Writers of America (SFWA) Grand Master series.

Meet Hyperion, the Largest and Most Massive Structure in Early Universe

The Artful Collector: Where Are They Now? Spotlight on “Jael”