Any of my friends could tell you how much I hate horror movies.  Whether it’s the hack-and-slash or the jump-out-and-terrify, I’m not into it.  I have no desire to see the serial killer fantasy played out for my viewing trauma, and I will not watch a bloody movie marathon on Halloween.

But I love horror.  Weird, right?

I love reading scary stuff (though I don’t do it as often as some), and I really, really love horror anime and manga (and Western comics, too!).  I wouldn’t want to watch Ringu or Ju-on, but I’m totally content with some creepy sequential imagery from overseas.  So what’s the difference?

To start, I think a lot of it has to do with aesthetics.  There are so many horror animanga out there with incredible artwork and animation and music.  Take, for instance, the work of Yoshitaka Amano:

The above image [found on minitokyo.net] is an illustration from Vampire Hunter D; in the United States, Amano is best known for illustrating Neil Gaiman’s Sandman story, Dream Hunters.  He has also done character designs for such series as Ayakashi: Samurai Horror Tales.  Gorgeous pencil sketches turned into dark, earthy watercolor illustrations – Amano is a master.  And he’s not the only one.

Another horror series with incredibly delicate art sensibility comes to mind: Pet Shop of Horrors, by Matsuri Akino.  In fact, the artwork is so beautiful and “feminine” that Akino-sensei has had a lot of trouble with her editors, who have told her that her work wasn’t believable enough as a horror manga.  But beautiful as it is, it’s certainly gruesome; the premise is that Count D, the owner of a pet shop in Chinatown, gives his customers the exact pet they need, with three very specific conditions.  If the conditions are not adhered to (they never are), the truly horrifying ensues.

I’ve already mentioned Ayakashi; a spin-off series called Mononoke was released in 2007.  This series should not in any way be confused with Princess Mononoke, the Miyazaki movie.  Mononoke is purely horror, but it’s so beautiful and has such mesmerizing animation that it doesn’t immediately occur to one that it falls into the same genre as something like Saw. 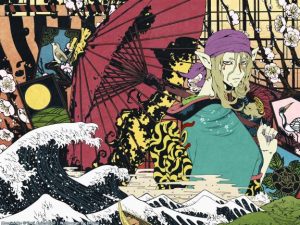 Set in the Edo period, Mononoke is rife with traditional costumes, settings, and themes.  It gives one quite an education, while thoroughly creeping you out.  The basic premise here is that mononoke, or supernatural spirits, come to the human plane of existence and must be exorcised by the main character, known only as the Medicine Seller.  In order to go through with exorcism, the Medicine Seller must discover the spirit’s Truth, Form, and Regret; that is, what type of spirit it is, why it has come to this world, and what awful thing has caused it to linger here.  Gorgeously rendered with rich colors and textures, Mononoke is a ecstatic visual experience.  I hope to do a more in-depth analysis of this series in the future; suffice to say, it’s definitely one of my absolute favorites.

As someone who has studied art, and who largely became an artist because of constant regular exposure to animanga, art is important to me when selecting a series.  So it makes sense that the works I’ve discussed here have made it to the top of my list.  But I am also a writer; therefore, the story has to do it for me, as well.  If I just wanted to look at gorgeous artwork, I would go to a museum.  I need substance as well.

When I think of the Western horror movie, I feel that most of them fall short in story-telling.  Again, I don’t watch them for my own entertainment, but I do hear a lot about them from friends and family who enjoy that sort of thing.  And while some of the situations are intriguing, I hear a lot of “there’s a bad character [be it a murderer or a ghost or what have you], and it scares the living hell out of everyone and there’s lots of blood.”  If that’s what you want, that’s all well and good.  But it’s not for me.

One of my favorite things about the horror that I’ve mentioned already is that there is a purpose to the horror.  Often times, the victims aren’t just innocent victims; they are being haunted or tormented because of something they have done – the horror enacted upon them is a consequence of their actions.  These aren’t just mindless bloodbaths, but also cautionary tales.  They put responsibility in the hands of the victims, which is not something we’re inclined to enjoy watching in the States.  I could go on about how this has to do with a sense of entitlement, etc., but I think even that’s too simplified.  Maybe we want to identify with the people being chased (because few people want to identify with a serial killer, I think), so they are made to be pure because we want to feel faultless as well.  Who knows.

And I suppose that the last factor is, really, that it’s much easier for me to separate horror from reality when it doesn’t look real.  When tragedy is taking place through animated characters, or characters in a comic book, I can feel for them, but I do not replicate those fears in my real life.  When such violence is taking place using actors – real people – I become hugely uncomfortable.  You can tell me as often as you want that it’s not real, and I know very well that it’s not real.  But I have been home alone and answered a phone that clicked off; I have heard noises coming from the other room; I have felt as though I was being watched or followed.  And to see a person on screen dealing with the follow-through of those circumstances – and for that follow-through to be far less than savory – is not something I particularly want to fertilize my already overactive imagination with.

I grew up with reading cutesy macabre stuff, a la Edward Gorey.  I can’t escape my love of the creepy, nor would I want to.  I just find that my scary-needs are best met in a medium which understands my desires for strong aesthetics and powerful storytelling.  With very few exceptions, Western cinema hasn’t really done that for me.  But I continue to seek out the beautifully morbid in the right-to-left pages of a manga, or the cel-shaded flipbook that is anime.