Welcome back to my little spot on Amazing Stories. I tell you, it’s really exciting that I’ve been given the opportunity to bring you closer to the world of Science Fiction Poetry (that being a catch-all term, you know) and I’m so grateful for the opportunity. Thanks for joining me!

In the last installment I began an interview with Bruce Boston, the first Grandmaster of Science Fiction Poetry as granted by the SFPA in 1999. I introduced him and he told us a bit about his life as a successful poet. We talked about his most recent publications – Anthropomorphisms and Notes from the Shadow City (a collaboration with Gary William Crawford). If you missed the first part, you can catch up here!

Diane Severson for Amazing Stories Magazine (ASM): You have two new collections forthcoming in the next year, both from Dark Renaissance Books: Dark Roads, Selected Long Poems, 1971 – 2012, due out in a few months, and Tales of the Mutant Rain Forest, a collaborative project with Robert Frazier, due in late 2013 or early 2014. 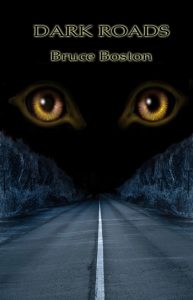 Dark Roads, contains, well, the title says it all. Long poems, if we take the Rhysling Award categories as our basis, are those fifty lines or longer? The poems you sent me as a preview are all well beyond fifty lines. I think they are all over a hundred lines even. Are these longer poems different from short poems in some qualitative way, or just quantitatively? Why did you decide to make these long poems when you were writing them? Or did it just happen? Why did you choose to collect them in one volume? Have they all been published in previous collections or are they scattered around the SF magazines and the Internet?

Bruce Boston (BB): Yes, I used the categories of the Rhysling Awards as the standard for defining length. I believe the shortest poem in the collection is just over fifty lines and the longest is over five hundred lines.

One of the main reasons I came up with an idea for the book was that it had been nearly twenty years since my last retrospective poetry collection, Sensuous Debris: Selected Poems 1970-1995 (Dark Region, 1995). It seemed time for another one, perhaps 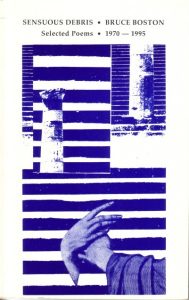 one covering my entire career as a poet…but thinking about what I’d want to include, I realized I’d be looking at a book well over two hundred pages. Clearly too long for a poetry collection. Since I feel that some of my longer poems are among my best work, I decided to refine the idea by just including longer poems. Most of these qualified as dark, so I decided to add some thematic unity by making them all dark. I still ended up with 156 pages for the trade paper edition, and 180 for the signed, limited hardcover, which contains eight additional poems. All of these poems except the longest one, “Thirteen Ways of Looking at and through Hashish,” which runs 21 pages, have been previously collected, scattered through thirty-odd other collections of mine. Less than a handful of them are available online.

As far as composition of the poems, some of the shorter poems in the collection, those not much over fifty lines, just happened that way. I had an idea for a poem, and in the course of writing it, I realized that for it to accomplish what I was after, it would have to be that long. However, the longer poems, those over a hundred lines, were conceived that way from the start, most often because they were narrative poems and the story I wanted to tell was clearly going to take some space. Other long poems that are not narrative, such as “Thirteen Ways of Looking at Vulture” embody a series of perceptions on a particular theme. And a few others, such as “The Lesions of Genetic Sin,” came into being as spontaneous explosions of surreal language. Short poems generally deal with a singular emotion, idea, or experience, whereas long poems often tend to be manifold in content and explore a variety of themes.

Audio: Confessions of a Body Thief

BB: If you were reading genre magazines in the late 80s and early 90s – Asimov’s, Amazing, Omni, Weird Tales, Science Fiction Age, Tomorrow, Dreams and Nightmares – there is a chance you may recall the Mutant Rain Forest, a world that Robert Frazier first created, and that he and I explored and expanded upon together with both collaborative and solo poems and stories. Additional sojourns into the Mutant Rain Forest have continued to appear since then, less frequently than in our first rush of creativity, most visibly in Asimov’s SF, Strange Horizons, and Dreams and Nightmares.

From our first collaboration in the Mutant Rain Forest, Bob and I knew we were onto something special. Our poetic voices melded and reinforced one another’s, and, unlike some other co-collaborators I’ve tried to work with, we were always open to one another’s ideas and suggestions. As Bob has written elsewhere: “The experience was heady, organic, overwhelming, and heartfelt from the get-go. We shared a world, a world that contains some of our finest lines.” 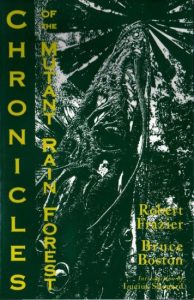 In 2006 Locus held it’s only Online Poetry Poll for “Best All-Time Science Fiction, Fantasy, or Horror Poem.” The poll ended up being kind of a mess because due to some electronic snafu they lost two weeks worth of votes. In any case, when they counted the votes they did have, “Return to the Mutant Rain Forest” was the winner.

Audio: A Missionary of the Mutant Rain Forest

ASM: So what else lies in your writing future?

BB: In June I’ll be attending the Bram Stoker Awards®/World Horror Convention in New Orleans as Poet Guest of Honor. I’ve never been to New Orleans and I’m much looking forward to it. My wife Marge Simon will also be in attendance, and also has a poetry collection, Vampires, Zombies, and Wanton Souls (Elektrik Milk Bath Press) on the Final Stoker Ballot. If one of us should happen to win in poetry, that means the other has lost, which will no doubt lead to a major altercation between us at the Stoker Banquet. Screaming, overturning tables, throwing chairs. That sort of thing. Nothing new.

Beyond that, as always, I’ll be trying to turn out more stories and fewer poems. I have a collection of original stories that is very gradually coming together with the working title Imaginary Streets. In any case, I hope to keep writing until the Reaper comes to call.  I saw him down the road a ways, but I think he still has quite a few other houses to visit before he reaches ours.

ASM: Well, I for one hope that he’s on another street altogether and I hope that you and Marge don’t injure each other or anyone else at the Stoker Banquet. It’s been a pleasure conversing with you, Bruce and I wish you much inspiration and productivity in the years to come.

Next up in my column will be reviews of Cthulhu Haiku and Other Mythos Madness, edited by Lester Smith; Lovers and Killers by Mary Turzillo and maybe more, if I can manage to read and write more! I hope to see you again in 2 weeks!

This is me, signing out.

The Empty Art of Onmyodo

Buying a Book for its Cover

Five nights at Freddy’s ain’t as easy as it sounds.