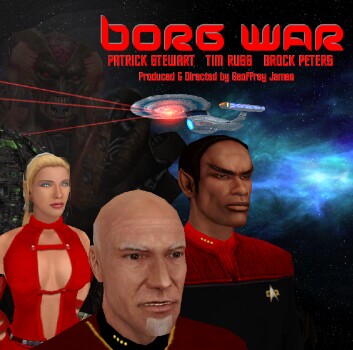 In 2006, I created Borg War, an animated Star Trek feature film. Since I suspect that most writers would jump at the change to script a Star Trek film, I thought it might be of interest for me to describe the filmmaking process.

Before I get started, I should probably point out that contrary to what you might believe, I’m not a big Star Trek fan and have only watched about half of the television programs (although all of the Next Generation series on which Borg War builds).

I made Borg War for two primary reasons: 1) to entertain my friends (who are prominently featured as characters in the film) and 2) as an exercise in learning how to plot.

At the time, I was having problems understanding how to plot my novel Sorcerer.  I don’t know how to explain it other than to say that “the words were getting in the way.”  Working with a non-written medium allowed me to rethink the writing process.

The version of Sorcerer that was recently published reflects that understanding of plotting and allowed me to write in a more “cinematic” way.  Borg War also satisfied the “film making” bug that I suspect I share with many other writers.

Borg War takes place 17 years after the return of Voyager. It depicts the conflict between the Federation, Klingons, Romulans, and a strain of Borg infected with a mind-controlling, flesh-mutating virus. The incursion of these diseased Borg throws the Alpha quadrant’s finely balanced power structures into chaos.

As Picard marshals the free races to oppose the Borg, the Klingons and Romulans use the turmoil as an excuse for interracial war. Meanwhile, the Borg themselves struggle against the infection, which is using them as a source for food. Conflict ensues.

Borg War features the voices of several professional actors, including Patrick Stewart, Tim Russ (aka Tuvok) and the late Brock Peters. It is also the first non-satire fan film to be shown at an official Star Trek convention, has  generated several million downloads, and got generally good reviews, despite the limitation of the production methodology.

Putting aside the cost of my labor and that fact that I was using computers that I’d already purchased, the film cost around $500 to make.  The animation seems crude today, Borg War still gets plenty of traffic and remains reasonably popular.

The raw footage of Borg War was made using two games, Star Trek Elite Force 2 (EF2) and Star Fleet Command 3 (SFC3).  I chose this product methodology–called Machinima–because it was (and is) the quickest way to make movies.

Even so, the production was no walk in the park.  I did not simply “capture gameplay” to make the film.  What the two games supplied were textures, animations, sound clips (including voiceovers) and models.

Writing the script required more or less memorizing the contents of several thousand voice clips files and then rearranging them (or segments of them) into an entirely new plot.

The production of the raw footage alone involved the creation of dozens of sets, additional textures, extensive character modding and editing of voiceover clips, a lot of camera work (placement, pan, zoom, etc.), all of which comprised about 35,000 lines of computer code.

This resulted in around hundred hours of raw footage, which was then video edited to create actual movie and to add SFX not provided in the original game. The entire process, start to finish, took approximately 1620 hours.

While Star Trek is of course a trademarked property, Borg War was created as a “new game material” a usage of the computer games that was specifically allowed in the user contracts for the Star Trek games published at the time by Activision.

All of the actors whose material was thus used (including Stewart) have accepted (or at least not deleted) Borg War as a valid project on their IMDB page. I specifically traded emails with Tim Russ, who characterized Borg War as “very cool.”

By the time I requested to show Borg War at an official Star Trek convention, the only objection that CBS legal (who inherited the games from Activision when Activision exited the Star Trek game market) surfaced was ownership of the music.

Turns out that the copyright to game music (unlike the voiceovers) is licensed from the composers.  However, both composers (the enormously talented Zak Belica and Denny Pelfrey) were kind enough to send me waivers.

In short, while obviously not canonical, Borg War was (and is) legal, as long it’s never used to make a profit and as long as it’s identified as non-canonical.

I learned far more than I expected from making Borg War.  This includes:

Would I do it again.  Absolutely not.  In fact, I can barely believe that I spent that much time on the project to begin with.

However, if I WERE to do a project like this again, I’d take the dialog from Star Trek: The Animated Series, extract the cheesy music, restructure it into 40 minute episodes (by combining stories) and reanimate the visuals.

The result would be a 13 episode “fourth series” of the original Star Trek.  I’ve played around with the idea of trying to kickstart something like this, but frankly I’m too busy with other projects to do anything substantive about it.

The Fire Must Be Kept Burning

“I wish I were a fireball…Romantic Musicals in space

For hundreds of years, premature burial has captivated readers and viewers of fiction. Why are we so fascinated with this horrific event?