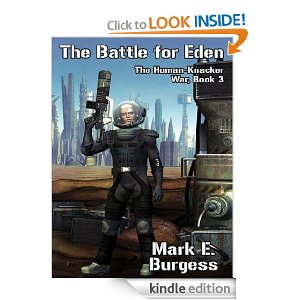 Last week we looked at one half of a double novel. If case you aren’t familiar with the format, they were popularized back in the 50s and 60s by Ace Books. Essentially two short novels, neither long enough for stand-alone publication were bound together. On one side of the book would be a cover, and if you flipped the book over so that the cover you were looking at would be facing down, there would be a second cover for a second novel. They were bound in such a way that the two novels were upside down with respect to each other.

Last week I reviewed Charles Allen Gramlich’s Under the Ember Star, which was very much a homage to Leigh Brackett, C. L. Moore, and other writes from that era. It was one of the best books I’ve read in a long time.

Frankly, I was a little uncertain how The Battle for Eden would compare. Mark E. Burgess was a writer who was new to me. Furthermore, the subtitle was The Human Knacker War Book 3. I was a little hesitant to jump into a series in what looked to be the middle. When I saw the list of other titles, I realized I needn’t be concerned on this point. Each volume was written by a different author, with the inaugural volume penned by the late Ardath Mayhar. Being a fan of Ms. Mayhar, I’ll be looking that one up.

But I digress. I was expecting a fairly standard military sf space opera type book. And that’s certainly how the story opens. But then it went in a direction that was completely unexpected.

Here’s what I mean. Simon Roy is a major in the Space Force, a man who lost his family to the Knackers. These are an ancient alien race that regards the galaxy as their buffet. They’ve destroyed a number of civilizations by harvesting them for food. Humanity is their latest target, and so far the Knackers are winning.

Roy is taking part in the defense of the planet Eden. It’s one of the most hospitable for human life in the known galaxy. His wife and daughter were taken by the aliens, and Roy lives solely to kill as many as he can.

The opening chapter is a space battle, and it’s your fairly typical dogfight in space scenario. Fortunately, Simon Roy’s fighter is damaged in the fight, and he ends up crashing on the planet.  I say “fortunately” because this moves the action onto the surface of the planet, where the story gets interesting.

The Knackers win the war in space, something obvious to Roy before he lands. He manages to survive the landing and is picked up a young woman who lives in the area. Her father, Tyrus McKinley, is a veteran who hates the Knackers and has been preparing for their invasion for years. He lives on a homestead in a nature preserve. But it’s not just any homestead. It’s a fortress.

Tyrus, his wife Amanda, his three sons, and one daughter have been training for years and they’re prepared. With them are Amanda’s younger sister Katherine and her daughter Jessie. Katherine’s a war widow, having lost her husband to the Knackers.

Tyrus and Simon implement a defensive strategy to protect themselves for the Knackers. The aliens look like crabs, and that’s what the humans call them. Using their military expertise, the men mount a vigorous and clever defense. This part of the book was well done, with logical plans. In fact the only problem I had with the military aspect of the book was once when Simon looks out an upstairs window, thinking they’ve killed all the attacking Knackers when one hanging on the wall grabs him by the arm. Jessie happens to be nearby and shoots the Knacker. Burgess never mentions whether the thing lets go of Simon’s arm before it falls. This was the only major continuity issue I had with the book. All of the other aspects were well done.

But the military campaign isn’t really the heart of the book. Rather Simon’s integration into the family, and especially his growing attraction to Katherine, are what sets this book apart from other novels of this subgenre. Simon goes from being a stranger, and one who’s not entirely trusted, to being part of the family. Burgess handles this part of his story extremely well. In fact he makes it look so easy, and has the relationship between Katherine and Simon develop so naturally, that I was amazed that this is only his second book.

Burgess dedicates the novel in part to Keith Laumer, and I can certainly see the influence there. But the writer who really came to mind while I was reading this was James H. Schmitz. One of the things about Schmitz’s work was that his characters had families, and those families weren’t dysfunctional. There’s a tendency in much modern sf to have heroes who either don’t have families or come from dysfunctional families and as a result can’t stand their families. It was a breath of fresh air to see family life represented in a positive light.

In fact, one of the reasons I liked this novel so much was that it was positive. Yes, the situation is dark, and the Knackers are truly nasty aliens. But Burgess, while not giving an entirely happy ending (and that’s all I’ll say on this point), kept a positive tone and brought the story to a generally upbeat conclusion without being heavy handed or preachy.

If you like old fashioned, optimistic science fiction, this is one you’ll want to read.

A final word on production values. I read the ebook version rather than the print version of this one. While the print edition is a double, the ebook editions of Under the Ember Star and The Battle for Eden are sold separately. Wildside Press does an excellent job on their electronic books, and this one is no exception. I found no problems with formatting. A professional job.