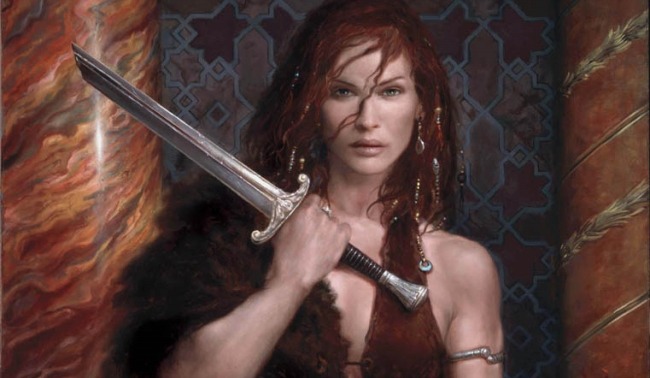 The “Maid of Orleans” according to legend, was a peasant girl who heard the voice of God telling her to don armour and go into battle for the cause of France during the Hundred Years’ War. The French folk heroine has been invoked over the centuries by writers and politicians alike and paintings of her in her battle garb abound. Some images have her depicted in full armour while others armour her top half while keeping her lower half in a skirt as in this Victorian era painting by John Everett Millais. 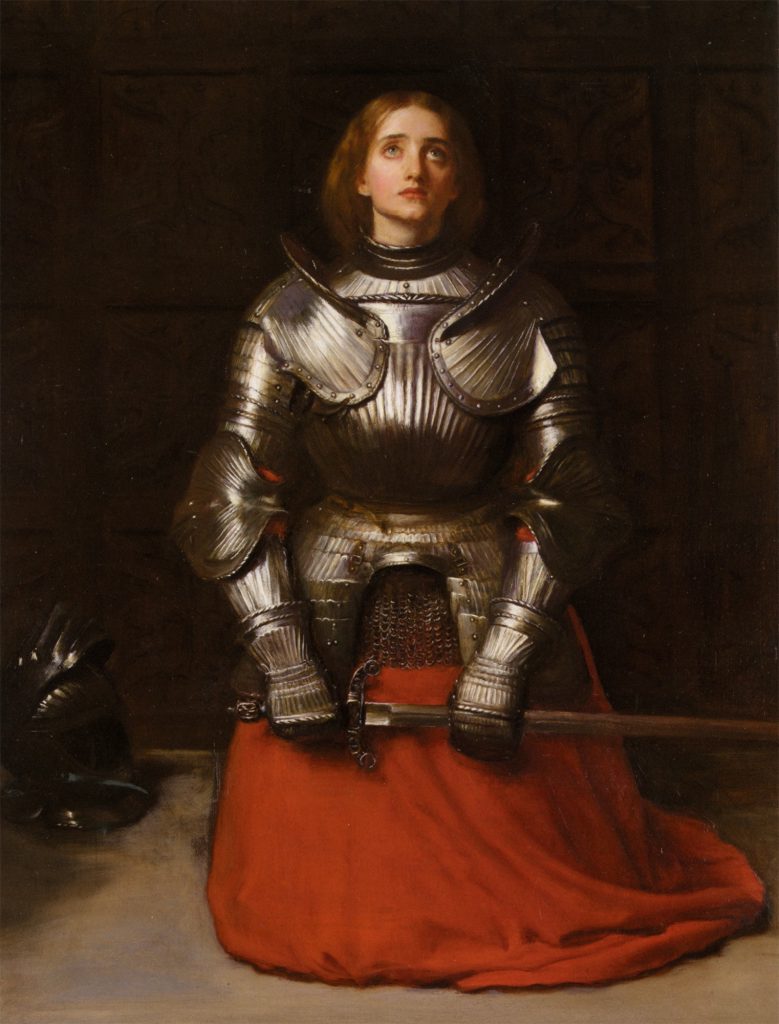 Historically there have been women who have donned armor and gone into battle. This is an undeniable fact of history. The Celtic warrior queen Boudicca as well as Joan are testimony to that reality. However, it is also pretty safe to say that the vast majority of warriors throughout history have been male. Women warriors have been a minority if not an oddity in history.

This is not so much the case in modern fantasy. Although not always the majority, modern fantasy novels tend to have a preponderance of women in armor. The Warrior Maiden is not unknown in mythology. The Valkyrie of the epic sagas — most familiar to us today represented by Brunhilde from Wagner’s Ring Cycle — was a tradition that Tolkien borrowed from with the character of Eowyn in The Lord of the Rings.

Tolkien, however, was predated by Robert E. Howard who had a number of female characters who took up the sword and armor and were just as capable as a man. Despite the many who criticize Howard for being sexist, the pulp writer from Cross Plains was, in fact, ahead of his time in his attitudes towards women. A writer who created characters such as Valeria, Dark Agnes and Red Sonya of Rogatino cannot, in all fairness, be characterized as sexist. 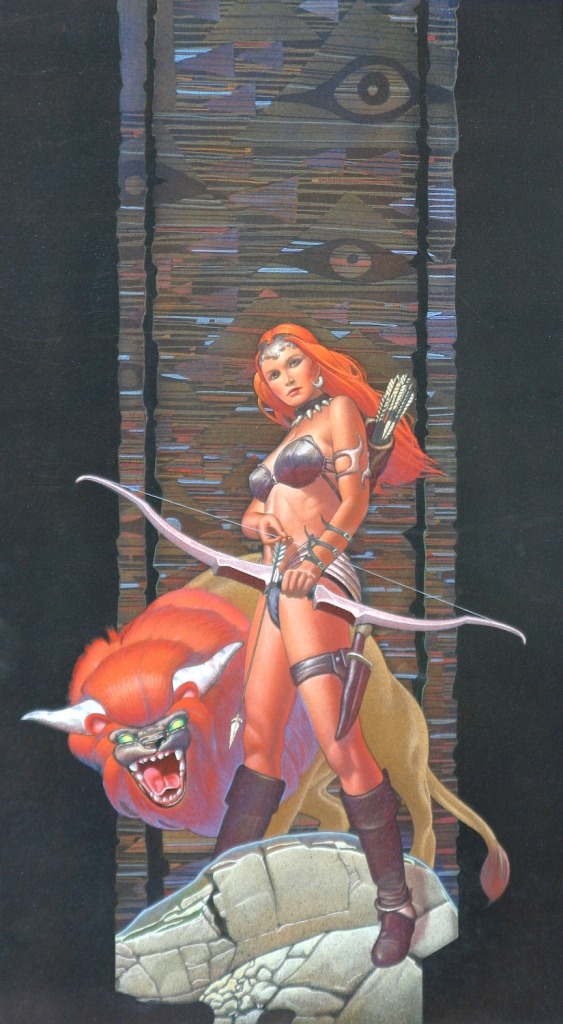 From the pulps C.L. Moore created Jirel of Joiry, and Lin Carter had Tara of the Twilight. At the time they were considered little more than a literary novelty act but in latter times have been adopted by certain factions as proto-feminist heroes.

Other women warriors in modern fantasy range from the realistic to the outright impossible. From Howard’s Sonya of Rogatino comic book writer Roy Thomas morphed her into Red Sonja. This Sonja was born from the outrage of rape (echoing the historical Boudicca) although she moves quickly into outrageous territory with her predilection for wearing very scanty chain mail.

It is certainly absurd to go into battle wearing little more than an armored bikini, but artists tend not to dwell on realism, preferring to dwell on womanly curves. Thus we move from women in armor to that bane of fantasy illustration: Chicks in Chain-mail.

Now, were I to go into battle and I knew I would be facing sword and axe wielding foes I would probably weep piteously for my mother. However, if I had to go, I would certainly want to be protected (particularly my fingers – an artist protects his hands!). I can see absolutely no situation where I would consider it advantageous to leap into battle wearing merely a chain-mail Speedo.

Yet, here we have example after example of fantasy artists who regularly produce images of women entering into the bloody fray wearing little or no armor and even less clothing. The classic Marvel Comics depiction of Red Sonja is probably the most egregious of these examples. Just as a woman should not enter into a store wearing only a bikini (unless one is in Florida during Spring Break) much less enter a battle. Red Sonja should not be doing what she is doing in her chain-mail bikini. And yet, there she is. 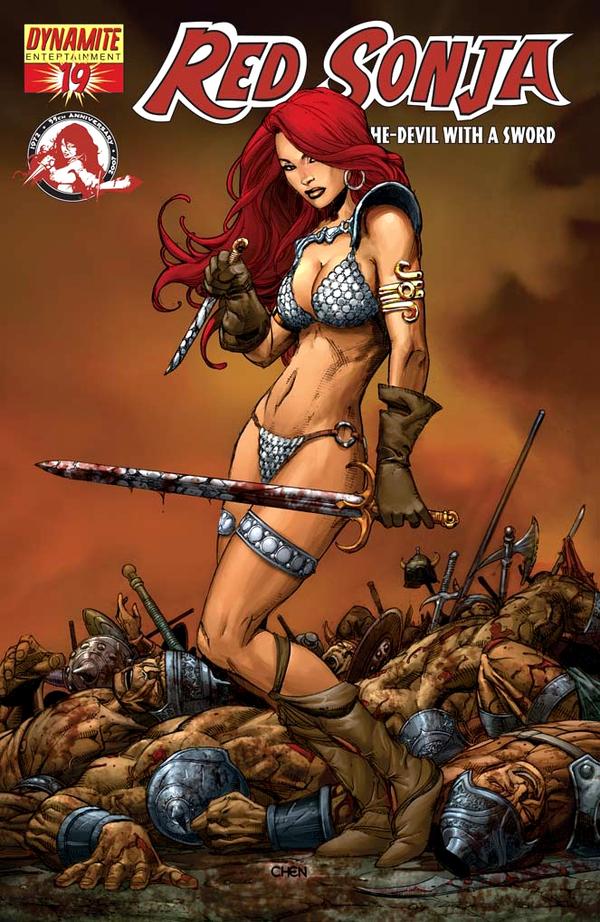 Now, originally she wasn’t depicted so scantily. Her original appearance in Marvel’s Conan the Barbarian as drawn by Barry Windsor Smith, depicted her with a longer chain mail shirt and a belt as well as leather boots. Of course she eschewed leggings in favor of a bikini bottom and bare legs, but at least the shirt was sensible. Other artists have tried to depict Sonja a little more realistically, notably a recent portrait by Donato Giancola which covers her (somewhat) in leather armor. 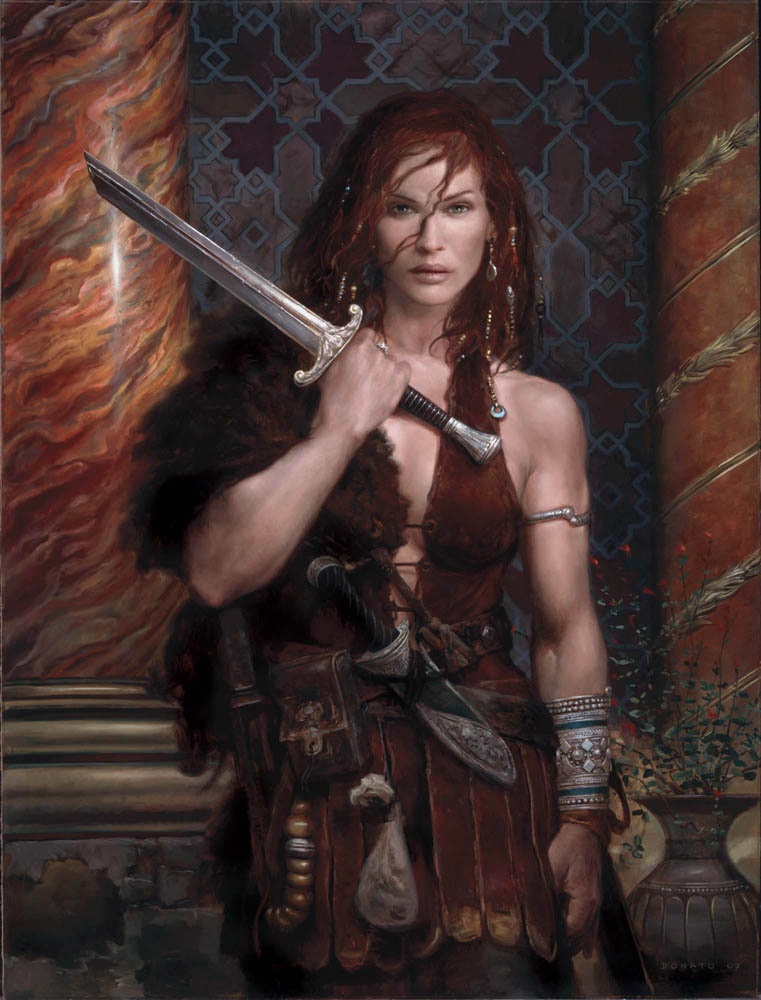 What possesses an artist to paint something that flies in the face of any semblance of reality? Well. I can’t really say, having contributed at least one image to this sub-genre: my cover for a fantasy novel, Foolish Gods (which, incidentally, was never used by the publisher, so it up for grabs if anyone out there has a fantasy novel that the image fits – I can make changes to suit, for a modest fee, of course)

Oh wait? Could it be money that motivates these artists? Maybe. Also the fact that drawing naked women is what a lot of young men got into art for in the first place! Artists will usually paint what they’re told to paint by publishers, but they cannot abrogate their responsibility in that fashion. Artists (many, many artists) will depict this unreality, these Chicks in Chain-mail, all on their own. They’ll tell you that it is to help sell a painting or an image and that is, for the most part, a good motivation, but if an artist is honest (and I’m talking about male artists here) he will admit that he just likes to draw semi-naked women holding sharp objects. Simple as that.

But what about Rowena Morrill? What about Julie Bell? They are women artists who perpetuate exactly the same images as their male counterparts. Doesn’t that make a case for the market having a great influence on the types of images that are pushed to the forefront?

Well, yes, but can one lay the blame on the market or does one have to look at society as a whole for the reasons? What I have discovered as I have been exploring this issue, writing these articles and reading comments, is that it is very complex. One could even say that, in writing this blog post and including images, I am perpetuating a harmful stereotype, and indeed, I don’t really know that I can argue that point.

It seems to be true that the fantasy art world is somewhat male dominated, but that is changing. Perhaps not fast enough.

This is a big topic and I can’t do it any justice in one blog post, but I will certainly visit it again. As always I welcome your feedback on this subject. Give me a piece of your mind.

A DOCTOR FOR THE ENTERPRISE: New Art, New Pages