There was no movie in 2012 that I looked forward to seeing more than Prometheus.  It was being produced by Ridley Scott, the same man who produced Alien and Blade Runner.  Unfortunately it wasn’t really experience I hoped for.

There were a few things about the movie to like.  It had great special effects and visuals, which seem to be the hallmark of a lot of the Hollywood movies that come out these days.  Generally speaking though, you aren’t going to see great plots, well defined characters, or intelligent ideas, because all of those things come from the script.  It’s almost impossible for an intelligent script to make it through the Hollywood process whole.

The interesting thing about Prometheus is that the original script for Prometheus is available to us now, and it’s a great script.  It is superior to the incohent mess that reached the screen in pretty much every way.  In fact, reading it answered a lot of questions that I had about the movie.  In the original, the reasons of the trip are more clear, and a lot of things that the characters do in the movie make far more sense.

An original script was hosted at Scribd.  It has since been removed, but the author confirmed the authenticity of the script in a tweet with the people who maintain the Prometheus 2 website.  Unfortunately, the script is mainly brought to us by Damon Lindelof, the same guy who wrote the finale to Lost.

Prometheus begins with a pair of scientists discovering what they believe to be evidence that aliens created our own race.  They believe they know where the aliens came from, and convince a billionaire to back an expedition to the stars to find the people who engineered humanity.

For me, the most amusing scene in the movie is when the team awakens at the planet after a period of suspended animation, and the scientists explain what they expect to find to their team.  Apparently, they raised a trillion or so dollars and convinced a group of experts to leave Earth on a journey that would take so long they would likely never see their families again, and only bothered to tell them why after they’d already arrived at the planet.  I wonder why they even agreed to go in the first place, if they didn’t know their purpose?  Ah well, I guess they had a few decades to burn.

Later, it appears that they have found this alien race and even intact pieces of their technology, but one of the scientists is so bitter about the fact that none of them are alive, that he gets drunk and lashes out at his girlfriend.  This makes him the worst scientist who ever lived.  If I found evidence of an alien intelligence complete with pieces of their technology, I can promise you that I would not waste time getting drunk.  I would study everything I found, and then publish it, knowing that my name would be found in the history books for millennia to come.

Throughout the movie, the team behaves like a pack of morons.  The reason for this is pretty simple; there are a hundred or so themes that are being incorporated into the movie by multiple teams of writers and editors, and there isn’t time enough to introduce them properly.  The only way to inform the audience of what is going on was to have the scientists not know themselves so it could be explained to them while the audience watched.  The scientists were written like barely functional morons.

The geologist on the trip was not merely stupid, he was dangerously unstable.  He began by 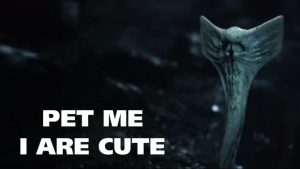 making fun of his superiors, verbally attacked someone who attempted to befriend him, and then when the team made the sort of discovery that scientists everywhere dream about, he flipped out and physically intimidated one of the leaders of the expedition, then stormed off into an alien environment, so angry he was apparently incapable of controlling his actions.  He and his friend then get lost and essentially dare an alien life form to murder them.  You would think that an interstellar expedition could have found a geologist who didn’t obviously have serious anger management issues.  I could find better talent working at a local fast food restaurant.

The tragedy of this movie is that so many talented people worked on it.  Some might not understand how so much talent can produce something so incoherent, but unfortunately, Hollywood does this all the time.

Though a book doesn’t have the benefit of visuals, it has the advantage that it was produced by a single artist who was able to describe his vision in exactly the way he wanted.  Movies are different in that they are produced by a team of hundreds, and before it reaches the screen many different people go over the script and weigh in on it.  It’s likely that they all view themselves as improving the work, but that is almost never the case.

In the same way that too many cooks working on one recipe tend to ruin it, it isn’t really a good idea for several teams of people to go over a script over a period of several years and hack it to pieces, adding their own themes as they go.  Ego is frequently part of the problem.  If you simply edit the script to help the author tell his own vision, it doesn’t feel like the project is truly your own.

But if you add your own ideas to the script then it becomes more ‘your’ work.  The more people who are involved, the more themes and ideas need to become explained, and the original characters and plot that were a part of the work get less and less time on the screen, and are harder to understand.

One of the deleted scenes revealed in a Blu-ray edition of the movie really helps to explain a lot.  Near the end of the movie, the billionaire who financed the expedition finally confronts one of the Engineers.  He is aged and nearly dead, and asks the Engineer to give him more life.  The Engineer asks him why, and he states that he is a god, because like them he has created life, the android David.  The Engineer does not agree, and kills him.

This moment, like many other moments that would have explained the plot, was removed.  Instead, there was no conversation at all.  They wake up the alien, try to communicate with him, and he tears the androids head off and kills the investor.  It’s a bizarre moment where you were expecting things to be explained, and to finally know what it all means.  But that hope is never realized.

When I watched the movie, I found myself feeling bad for the people who put so much effort into a script that had become so flawed.

Michael Fassbender was one of the great parts of the movie.  He played an android very convincingly, and he was in the movie’s most interesting moments.  When he found one of the scientists getting drunk, bitter because he couldn’t ask the Engineers the meaning of life, he pointed out that he himself was having the meeting the scientist wished he could have.  He himself was an android created in the image of man, speaking to his creator.  The scientist indicated that androids had been made for less than grand reasons, and David essentially replied:

“How terrible would it be, if you met your creator and asked him why he made you, and he gave you the same answer?”

The scientists want to ask their maker the meaning of life, and the person who backed the trip wanted the engineers who apparently made us to “give him more life.”  It never occurred to him that we might have just been an interesting experiment that was later cast away.